Watch the Milky Way being BORN in a few seconds: New simulation solves a decades-old mystery about our galaxy. It took billions of years for our Milky Way to become the vast and complex structure it is today. 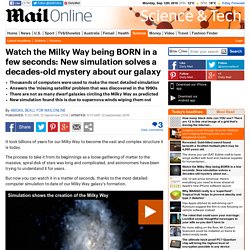 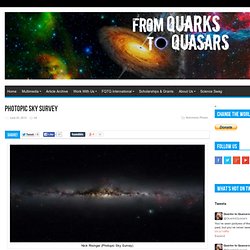 Pictured here is the final result of the Photopic Sky Survey by astrophotographer Nick Risinger. Mr. Risinger traveled 45,000 miles by air and 15,000 miles on land, to every corner of the globe, in order to capture this panoramic view of the entire Milky Way as seen from Earth. This yearlong project was made more difficult by light pollution and the cycles of the moon, especially in the Northern Hemisphere. In the end, this project required 37,440 exposures to capture the majesty of our Milky Way (and beyond) in an impressive 5,000-megapixel image. I think Mr. This image breathes life into extremely faint stars, much fainter than you could possibly see with the naked eye. There is a high resolution and interactive version of the picture found here.

Joshua Filmer Joshua specializes in Mathematics and Physics at Portland State University. Chromoscope. Gamma rays set to stun: Mystery of the two gigantic 'beams' that blasted out of the heart of the Milky Way a million years ago. By Rob Waugh Published: 16:49 GMT, 29 May 2012 | Updated: 06:34 GMT, 30 May 2012. 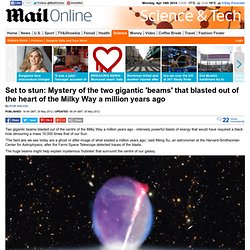 Supermassive black hole will 'eat' gas cloud at heart of Milky Way galaxy. By Eddie Wrenn Updated: 15:54 GMT, 27 June 2012 Next year will see one of the biggest collisions ever observed by man. 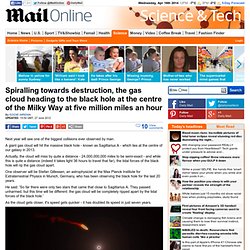 A giant gas cloud will hit the massive black hole - known as Sagittarius A - which lies at the centre of our galaxy in 2013. Actually, the cloud will miss by quite a distance - 24,000,000,000 miles to be semi-exact - and while this is quite a distance (indeed it takes light 36 hours to travel that far), the tidal forces of the black hole will rip the gas cloud apart. One observer will be Stefan Gillessen, an astrophysicist at the Max Planck Institute for Extraterrestrial Physics in Munich, Germany, who has been observing the black hole for the last 20 years. He said: 'So far there were only two stars that came that close to Sagittarius A. As the cloud gets closer, it's speed gets quicker - it has doubled its speed in just seven years. Just like the chocolate bar, the Milky Way galaxy is 'full of bubbles', say scientists. By Rob Waugh Published: 16:39 GMT, 8 March 2012 | Updated: 17:58 GMT, 9 March 2012 Just like the fluffy nougat in the chocolate bar, the Milky Way galaxy is full of bubbles, a new survey by 'citizen scientists' has found. 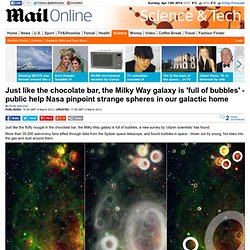 More than 35,000 astronomy fans sifted through data from the Spitzer space telescope, and found bubbles in space - blown out by young, hot stars into the gas and dust around them. Volunteers for the project are shown a small section of Spitzer¿s huge infrared Milky Way image (left), which they then scan for cosmic bubbles. Do two giant 'bubbles' of radiation at heart of Milky Way hold the 'smoking gun' that proves dark matter exists. Milky Way only settled into current state just as Earth and Sun were forming. By Daily Mail Reporter Published: 18:49 GMT, 21 October 2012 | Updated: 17:31 GMT, 22 October 2012 Disc galaxies like our own Milky Way were believed to have been formed billions of years ago but now scientists have discovered it only settled into its present state at around the time the sun and Earth were forming. 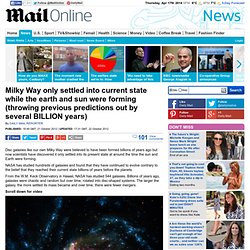 NASA has studied hundreds of galaxies and found that they have continued to evolve contrary to the belief that they reached their current state billions of years before the planets. From the W.M. Keck Observatory in Hawaii, NASA has studied 544 galaxies. Scroll down for video Out of this world: Spiral galaxies, including our own Milky Way, have continued to evolve over time.

Nasa Milky Way Galaxy: The stunning image revealing a massive halo of hot gas that envelops our universe. The Milky Way as you've never seen it before: New pictures from nine GIGAPIXEL camera reveal our galaxy in unprecedented detail. Unique view is a monumental 108,200 by 81,500 pixel colour image containing nearly nine billion pixels iIf printed with the resolution of a typical book, it would be 9 metres long and 7 metres tall By Mark Prigg Published: 11:28 GMT, 24 October 2012 | Updated: 13:35 GMT, 24 October 2012 A new striking nine-gigapixel image has captured a catalogue of more than 84 million stars in the central parts of the Milky Way - ten times more than previously observed. 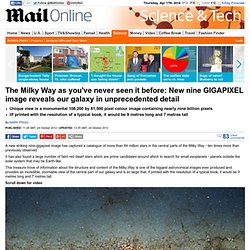 It has also found a large number of faint red dwarf stars which are prime candidates around which to search for small exoplanets - planets outside the solar system that may be Earth-like. NASA space telescope shows there may be 17 billion Earth-like planets in Milky Way. Chances of finding extra terrestrial life boosted by latest analysisNasa believes almost every sun-like star could have at least one planet461 potential planets identified by the Kepler mission since February 2012Dramatic increase in number of Earth-sized planets. 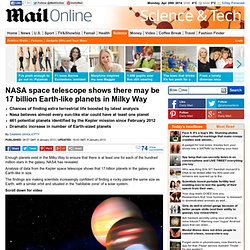 The mystery of black hole at centre of galaxy: 'Sleeping dragon' erupted two million years ago. For 20 years scientists had suspected that a huge outburst had occurredEvidence now suggests the black hole did in fact erupt two million years agoExplosion was so powerful that it lit up a cloud 200,000 light years awayAstronomers predict that a gas cloud called G2 could cause activity in the black hole early next year By Ellie Zolfagharifard Published: 18:29 GMT, 25 September 2013 | Updated: 19:15 GMT, 25 September 2013 The mystery as to why our galaxy’s supermassive black hole is dormant has stumped scientists for decades. 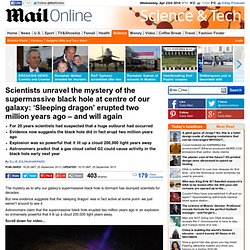 But new evidence suggests that the ‘sleeping dragon’ was in fact active at some point- we just weren’t around to see it. Astronomers claim that the supermassive black hole erupted two million years ago in an explosion so immensely powerful that it lit up a cloud 200,000 light years away. Scroll down for video... While scientists had previously predicted that such an outburst had occurred, this is the first time they have been able to say when it happened.