How to build a Tesla Coil 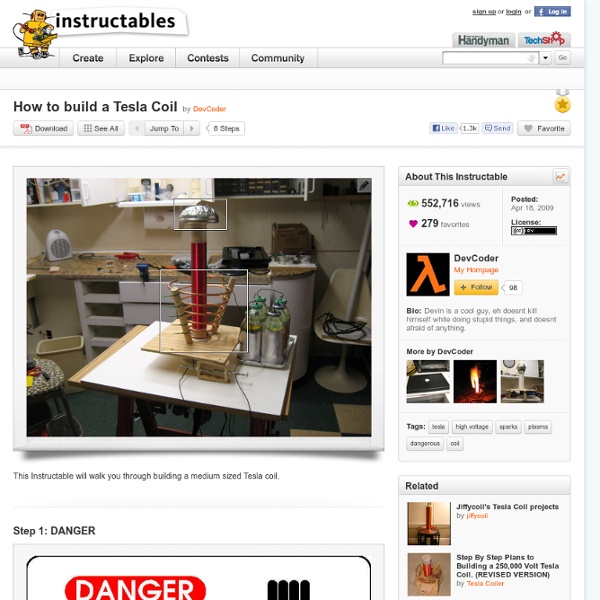 Unlike some other high voltage experiments, a Tesla coil's streamers can be very harmful. If you are shocked by the streamers, you will not feel pain, but your circulatory and nervous system can sustain severe damage. DO NOT TOUCH IT WHILE ON UNDER ANY CIRCUMSTANCES. Also, I don't take any responsibility for you hurting yourself. This isn't to say that you shouldn't get into high voltage though, its just that if you are planning for this to be your first HV project, its a little to involved. Instead, try out a nice microwave oven transformer, and be safe!

SMT soldering - Manga SMT Soldering–It’s easier than you think! is our new Manga Comic that shows you step by step tips and techniques for learning to solder SMT parts . We’d love to get your feedback on the comic. We are in the process of working out the kinks so we can get translations of the comic into everyone's hands – we’ll keep you posted. For everyone that learns better with hands on experience we are offering our SMT 2D6 SMT Learn to Solder Kit in the store. You will end up with a 2 Dice simulator that can be used for games and fun and satisfaction in your new found knowledge that you gained in the world of SMT electronics.

Sourcing electronic components for synth-DIY "Not discontinued, you understand,just on a 52-week lead time." —Dan Mills Hardware Eurorack frames AKA Eurocard frames AKA IEC 60297 sub-racks. supermoduul.com have them cheap. RGB LED controller Want to build an RGB LED controller that you can program with your own custom sequences and effects? Then read on. The RGB LED controller has proved to be very popular project and has been the most frequently downloaded code on the site since it was made available. I've been contacted by people who have incorporated this project into all kinds of things including mood lamps, lighting for a sculpture, accent lighting for rooms and an illuminated prize trophy. For 2006 I completely rewrote the application making it much easier to add, edit and change the sequence data. I also added a sleep function so a battery operated version can be built that doesn't need a power switch.

OpenCores Details Name: avr_core Created: Nov 5, 2002 Updated: Feb 4, 2014 SVN Updated: Oct 28, 2012 SVN: Browse Latest version: download Statistics: View Other project properties Category: Processor Language: Development status: Stable Additional info: none WishBone Compliant: No License: Description Hardware: Remote Control your Arduino « Your Warranty Is Void.com Have a giant Arduino powered killbot, but can’t fancy being right next to it when you unleash it on the unsuspecting populace? Want to change the mood-lights in your dorm without having to get up off the couch? Why not use IR remote controls to do the walking for you? In this article, I will be covering how to use the IRremote Library written by Ken Shirriff for the Arduino to control a seven segment display as a proof of concept.

Wireless Power A few years ago MIT created a system for transferring power wirelessly. They transmitted power over a two-meter distance, from the coil on the left to the coil on the right, where it powers a 60W light bulb. Back in 2006, this was a pretty cool thing. scanning_without_panels_by_hal [DAVID-Wiki] by Mattia Mercante – mattia.mercante@gmail.com Many thanks to WalterMo and to Alessandro for their help. Minor corrections by: Felipe La Rotta The goal of this tutorial is to introduce you to one of DAVID's features: Scanning without panels. Before starting with our real-world example, we need to get all the necessary equipment besides DAVID starter. Stepper motor: Unlike a common motor that spins continuously, a stepper motor only moves in small and very precise increments.

DorkbotPDX Instead of a weekly order, 2 layer circuit boards are now sent to the fab when the panel fills up. This means panels are going out 2 to 3 times a week instead of just once a week. Contents New ordering website! OSH Park! 4 layer orders are now every two weeks. Arduino Keyboard Emulator *Updated* At the EDGE Lab in the Digital Media Zone, we are trying to design a custom keyboard for children with disabilities in order to make typing more exessable. Many of the children simply cannot work a standard US keyboard. The buttons are too close, the buttons are too hard, or the layout is really confusing for children. These are many of the complaints we got so we attempted to build our own custom keyboards. A few months ago a new line of arduino micro controllers came out called UNO and MEGA 2560. They included a new ATmega8U2 chip which was flashable.

Schematics Guide You can see that there are various bits represented by symbols, all connected in various ways. Let’s look at some of the big picture concepts: Left to Right: The first thing to notice is that you read the schematic left-to-right: the input on the left feeds the signal through parts and pathways in the middle to an output on the right. Sean Voisen » Re-creating the "breathing" LED Perhaps it’s not surprising, but Apple has a patent on the iconic "breathing" pattern used for the sleep indicator LED on all their computers. Recently — for a personal project — I wanted to see if I could replicate this effect. It turns out that I wasn’t alone. Ladyada tried to reverse engineer the pattern a few years ago. Unfortunately, she stopped short of providing anything — like code — that the lazy web surfing Arduino hacker might use to recreate the effect.

Multimeter Help 2 Mike690003, What is your background? How deep an understanding are you looking for? A practical understanding of DC circuits is not difficult and learning to use the multimeter with DC will make perfect sense. Just through simple experimentation, after reading the accompanying manual, you'll learn a lot. TINYenormous - Build it up to break it down again I’ve been really interested in doing J4mie’s Physical Gmail Notifier ever since it came out in February. I only recently dropped into the project and got to learn a lot about python, plists, and arduino auto-reset functionality. I’m going to share what I’ve learned because I think there are lots of other people out there struggling to make it work.