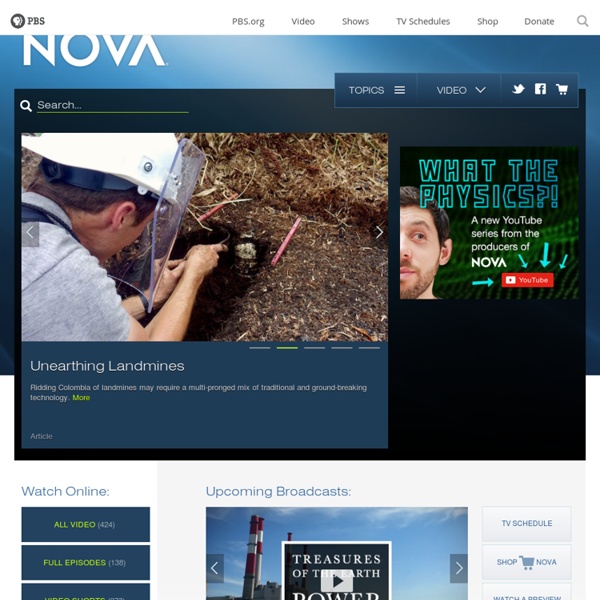 Can Wind Turbines Make You Sick? Residents living in the shadows of wind turbines say the sound is making them sick. But so far the science isn't there. From NOVA Next | Jun 27, 2018 Thirty Years Ago Today, Global Warming First Made Headline News On June 23, a NASA climate scientist, James Hansen, told a U.S. From NOVA Next | Jun 23, 2018 New Middle Eastern Particle Accelerator’s Motto is “Science for Peace” In a region in turmoil, an unprecedented joint venture of scientists and policymakers is working together on Jordan’s new particle accelerator under the motto "science for peace." From NOVA Next | Jun 21, 2018 Psychological Damage Inflicted By Parent-Child Separation is Deep, Long-Lasting Here's what happens in the brain and the body when a child is forcibly separated from his or her parents.

Wallpaper Camera Wraps Around Any Surface What if you could wrap a camera around your car (or tank) for a 360-degree view or encircle a streetlight to boost security? You might even use it as wallpaper to check out what’s happening in the room next door. This idea may have taken a step closer with a new thin flexible sheet camera design by researchers at Columbia University. While they are still working on prototypes, they say they have overcome several obstacles that have tripped up previous efforts and hope to have a real camera soon. 11 Bizarre Sources For Alternative Energy “We are exploring ways to capture visual information in unconventional ways,” said Shree Nayar, a professor of computer science at Columbia.

The Buckminster Fuller Institute During the last two weeks of January 1975 Buckminster Fuller gave an extraordinary series of lectures concerning his entire life's work. These thinking out loud lectures span 42 hours and examine in depth all of Fuller's major inventions and discoveries from the 1927 Dymaxion house, car and bathroom, through the Wichita House, geodesic domes, and tensegrity structures, as well as the contents of Synergetics. Autobiographical in parts, Fuller recounts his own personal history in the context of the history of science and industrialization. The stories behind his Dymaxion car, geodesic domes, World Game and integration of science and humanism are lucidly communicated with continuous reference to his synergetic geometry.

50 Things Everyone Should Know by Mark and Angel Self-reliance is a vital key to living a healthy, productive life. To be self-reliant one must master a basic set of skills, more or less making them a jack of all trades. Contrary to what you may have learned in school, a jack of all trades is far more equipped to deal with life than a specialized master of only one. While not totally comprehensive , here is a list of 50 things everyone should know how to do.

The Human Body: Sites, Activities & Projects Human Body Picturing the Body Learn about common techniques for peering inside the body in order to diagnose disease and injury. Exploring Hair How to Remove Trovi / Conduit / Search Protect Browser Hijack Malware If your computer has been hijacked with an obnoxious malware that won’t let you change your home page, there’s a strong chance you’ve been infected with the Trovi Search Protect malware, which used to be known as Conduit. Here’s how to remove it. How do you know this is malware? Instead of installing like it should, as a Google Chrome Extension, you’ll probably see that your extensions list doesn’t mention Trovi or Conduit at all. Instead, they are hijacking the browser process using Windows API techniques that no legitimate application should be using. For more details on that, you can read our series on using Process Explorer to troubleshoot Windows.

Nonverbal Communication for Human-Robot Interaction: Henny Admoni Robotics has already improved lives by taking over dull, dirty, and dangerous jobs, freeing people for safer, more skillful pursuits. For instance, autonomous mechanical arms weld cars in factories, and autonomous vacuum cleaners keep floors clean in millions of homes. However, most currently deployed robotic devices operate primarily without human interaction, and are typically incapable of understanding natural human communication. As robotic hardware costs decrease and computational power increases, robotics research is moving from these autonomous but isolated systems to individualized personal robots. Robots at home can help elderly or disabled users with daily tasks, such as preparing a meal or getting dressed, which can increase independence and quality of life. Robots for manufacturing can act as intelligent third hands, improving efficiency and job safety for workers.

Buckminster Fuller and Education's Automation 7 min read You can trace the history of ed-tech through many education philosophies and through many technologies. Too often we fail to trace that history at all – a pity because then we don’t think about the trajectory that our storytelling places us on. And too often, we focus simply on technologies related to the computer and the Internet.

Discovery Education Science e-Book Reading Passages Leveled informational science text and reading passages specific to each content area with audio support Fun-Damentals We're sorry..., Social Security You must be able to verify some information about yourself and: Have a valid email address; Have a Social Security number; Have a U.S. mailing address; and Be at least 18 years of age. You can only create an account using your own personal information and for your own exclusive use. You cannot create an account on behalf of another person or using another person's information or identity, even if you have that person's written permission. For example, you cannot create an account for another person: With whom you have a business relationship; For whom you are a representative payee; or For whom you are an appointed representative.

Bellies full of microplastic rob baby fish of their basic instincts Larval European perch that has ingested microplastic particles (light-colored spheres on bottom side). Photo by Oona Lönnstedt When exposed to microplastics, baby fish stop eating natural food and prefer consuming the pollutant, according to a report from ecologists at Uppsala University in Sweden. The dietary switch derails the basic instincts of the fish, the researchers found, elevating the likelihood of being caught by predators.

Many of the videos from PBS nova are impressive because they truly show how many of the living things and none living things in our world work. My 5th grade students love to watch PBS and have discussions about the videos. by esteban_cole Jul 15

here we have the irony of one David H. Koch patronizing NOVA, one of the very few science programs and the syndicated version of the BBC's Horizon (the programs are virtually identical; mostly the narrator is switched out). This is really quite disturbing to anyone who is prepared to pay attention. via: by notpicnic Mar 8