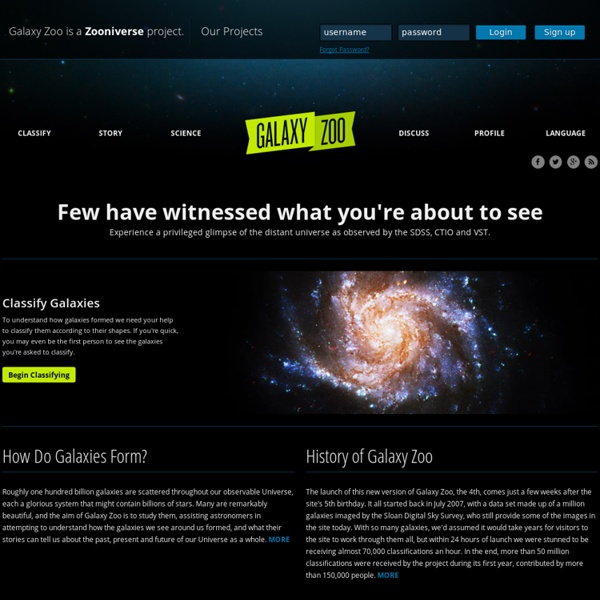 Universe has 2 trillion galaxies, astronomers say There are a dizzying two trillion galaxies in the universe, up to 20 times more than previously thought, astronomers reported on Thursday. The surprising finding, based on 3D modeling of images collected over 20 years by the Hubble Space Telescope, was published in the Astronomical Journal. Scientists have puzzled over how many galaxies the cosmos harbors at least since US astronomer Edwin Hubble showed in 1924 that Andromeda, a neighboring galaxy, was not part of our own Milky Way. But even in the era of modern astronomy, getting an accurate tally has proven difficult. To begin with, there is only part of the cosmos where light given off by distant objects has had time to reach Earth.

Crowdsourcing Crowdsourcing is a sourcing model in which individuals or organizations obtain goods and services. These services include ideas and finances, from a large, relatively open and often rapidly-evolving group of internet users; it divides work between participants to achieve a cumulative result. The word crowdsourcing itself is a portmanteau of crowd and outsourcing, and was coined in 2005.[1][2][3][4] As a mode of sourcing, crowdsourcing existed prior to the digital age (i.e. Girls' Mackenzie Retro Lunch Bags We now offer international shipping through global provider, Borderfree. As you shop, you will see prices in your selected currency. You can change where you would like to ship your items in the top right corner of our website. To learn more about international shipping, please visit our International Orders page.

No. 41 - 2011: You Can Participate in Astronomy Research Projects You Can Participate in Astronomy Research Projects Finding Exoplanets: The graph in this illustration shows how the light we see from a star decreases slightly when one of its planets crosses the star’s disk. Planet hunters sometimes use this transit technique to find exoplanets. Art by Karen Teramura. You don't have to be a professional astronomer, or even own a telescope, to participate in a myriad of astronomy research projects.

Why the multiverse is all about you - The Philosopher's Zone In general, quantum physicists don't have much truck with big conceptual schemes. But one of their own has broken rank. Christopher Fuchs tells Joe Gelonesi how a particular school of 20th century philosophy helps him make quantum leaps. Quantum mechanics can be tough to get your head round. Microwork Microwork is a series of small tasks which together comprise a large unified project, and are completed by many people over the Internet. [1] [2] Microwork is considered the smallest unit of work in a virtual assembly line. [3] It is most often used to describe tasks for which no efficient algorithm has been devised, and require human intelligence to complete reliably. The term was developed in 2008 by Leila Chirayath Janah of Samasource. [4] [5] Microtasking[edit]

'Zombie' stars key to measuring dark energy "Zombie" stars that explode like bombs as they die, only to revive by sucking matter out of other stars. According to an astrophysicist at UC Santa Barbara, this isn't the plot for the latest 3D blockbuster movie. Instead, it's something that happens every day in the universe - something that can be used to measure dark energy. Hubble data predicts Milky Way galactic collision When Galaxies Collide! It sounds like an early science fiction novel. However, analysis of Hubble measurements shows that our own Milky Way galaxy is moving toward a head-on collision with our nearest neighbor, the Andromeda galaxy (also known as M31). The collision will start in about four billion years, and over the following three billion years the two spiral galaxies will coalesce into a large elliptical galaxy. Based on this data, NASA has produced a video of the upcoming collision. View all

Sun for All Project download poster The project “Sun for all”, funded by Ciência Viva (2005 117/ 18) aims to promote science in general and astronomy in particular, among students. The project rests on the asset of over 30000 Sun images (spectroheliograms) that are kept in the Astronomical Observatory of the University of Coimbra, as a result of a work of over 80 years of daily solar observations that started in 1926. Presently there are about 15000 digitised images that are available to the general public due to another project, also funded by “Ciência Viva”, which was developed from 2002 to 2004. The solar observations collection has an enormous scientific value. Thus, this project aims to make this collection available in a digital way via WWW to Portuguese and foreign students, as well as a set of activities that enables them to use these images, in order to introduce them to the scientific method, having the Sun and its atmosphere as the background (see in "SUPPORTING MATERIAL").

The Edge Of The Universe Is Closer Than Scientists Previously Thought The visible universe just shrunk by 320 million light-years in all directions, updating a famous calculation that physicists first made 13 years ago. If you're trying to calculate the size of the cosmos, the speed of light — the fastest anything can go — is a tempting place to begin and end. You'd reason that since the Big Bang happened some 13.8 billion years ago, there's a 13.8-billion-light-year radius marking the edge of what mere mortals could see.