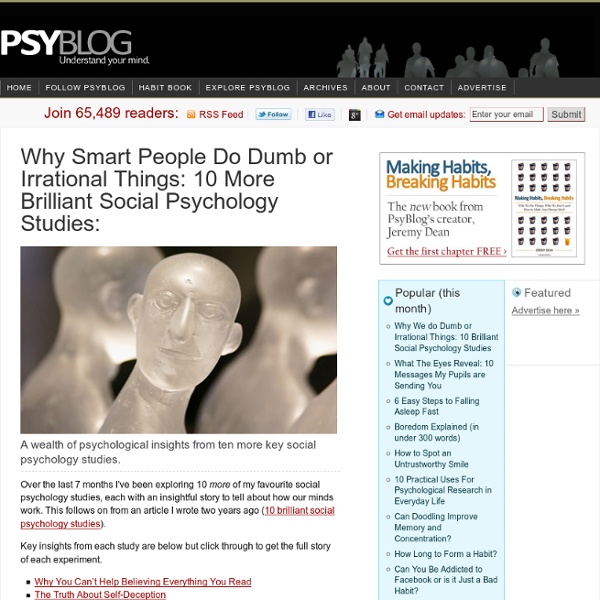 ISFJ This article is about the Myers-Briggs personality type. For the Socionics ISFj, see Ethical Sensory Introvert. ISFJ (Introversion, Sensing, Feeling, Judging) is an abbreviation used in the publications of the Myers-Briggs Type Indicator (MBTI) to refer to one of sixteen personality types.[1] The MBTI assessment was developed from the work of prominent psychiatrist Carl G. Jung in his book Psychological Types. 10 Brilliant Social Psychology Studies Ten of the most influential social psychology experiments. “I have been primarily interested in how and why ordinary people do unusual things, things that seem alien to their natures.Why do good people sometimes act evil?Why do smart people sometimes do dumb or irrational things?”

many of whom take a moral high ground 2009 may well be remembered for its scandal-ridden headlines, from admissions of extramarital affairs by governors and senators, to corporate executives flying private jets while cutting employee benefits, and most recently, to a mysterious early morning car crash in Florida. The past year has been marked by a series of moral transgressions by powerful figures in political, business and celebrity circles. New research from the Kellogg School of Management at Northwestern University explores why powerful people - many of whom take a moral high ground - don't practice what they preach. Researchers sought to determine whether power inspires hypocrisy, the tendency to hold high standards for others while performing morally suspect behaviors oneself.

DevOps Reactions by yreactions by undermythumblr by @uaiHebert by Leprosy by @uaiHebert by @uaihebert Psychometric The Psychology Department has the following tests which may be used only by Psychology staff and students for testing purposes. They are available to be borrowed from Karen Fleet in the Psychology & Philosophy Library which is staffed 9-5 on weekdays during term-time. For more detailed information on which test is appropriate for your study please consult your supervisor or demonstrator. As well as looking at the list of tests held by the department you can do a keyword search on databases such as the Web of Knowledge. There are a number of web pages which give guidance on psychological testing such as the American Psychological Association's 'Testing and Assessment Program' or the British Psychological Society's 'Psychological Testing Centre (PTC)'. Also see International Personality Item pool for public domain personality tests.

10 Practical Uses For Psychological Research in Everyday Life People love to give each other advice. The web is full to bursting with all types of pseudo-psychological advice about life. The problem is, how much of this is based on real scientific evidence? Well, here on PsyBlog we’ve got the scientific evidence. So here’s my top 10 list of what you can learn practically from the psychological research discussed here recently. 1. To predict what will make you happy, ask a stranger rather than guessing yourself Want to know how much you’d enjoy an experience? You’re better off asking someone who has been through it, even if they’re a complete stranger, than to find out information for yourself. This advice comes from Daniel Gilbert from Harvard University, who espoused it in his superb book Stumbling on Happiness. Now, he has found new support for the idea by studying speed-daters and people receiving feedback from their peers. In the first study, he found that female students were better able to predict how much they would enjoy a speed-date if they listened to the experiences of strangers than if they make their own assessments based on available information. Likewise, the second study found that people more accurately foresaw their reactions to criticism when they knew how someone else had reacted than when they had the information for themselves.

INTJ Profile Introverted iNtuitive Thinking Judgingby Marina Margaret Heiss Profile: INTJ Revision: 3.1 Date of Revision: 17 Oct 2009 To outsiders, INTJs may appear to project an aura of "definiteness", of self-confidence. This self-confidence, sometimes mistaken for simple arrogance by the less decisive, is actually of a very specific rather than a general nature; its source lies in the specialized knowledge systems that most INTJs start building at an early age. Signs You're An Introvert Think you can spot an introvert in a crowd? Think again. Although the stereotypical introvert may be the one at the party who’s hanging out alone by the food table fiddling with an iPhone, the “social butterfly” can just as easily have an introverted personality. “Spotting the introvert can be harder than finding Waldo,” Sophia Dembling, author of “The Introvert’s Way: Living a Quiet Life in a Noisy World,” tells The Huffington Post. “A lot of introverts can pass as extroverts.”