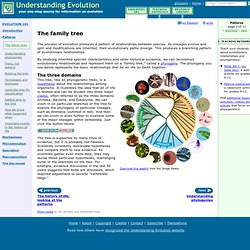 As lineages evolve and split and modifications are inherited, their evolutionary paths diverge. This produces a branching pattern of evolutionary relationships. By studying inherited species' characteristics and other historical evidence, we can reconstruct evolutionary relationships and represent them on a "family tree," called a phylogeny. The phylogeny you see below represents the basic relationships that tie all life on Earth together. Tree of life - Wikipedia. Cancel Edit Delete Preview revert Text of the note (may include Wiki markup) Could not save your note (edit conflict or other problem). 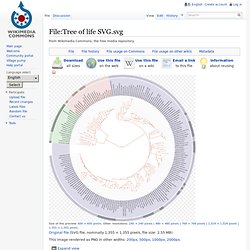 Please copy the text in the edit box below and insert it manually by editing this page. Upon submitting the note will be published multi-licensed under the terms of the CC-BY-SA-3.0 license and of the GFDL, versions 1.2, 1.3, or any later version. See our terms of use for more details. Add a note Draw a rectangle onto the image above (press the left mouse button, then drag and release). Save To modify annotations, your browser needs to have the XMLHttpRequest object. Tree of Life.pdf. International Code of Zoological Nomenclature.

How names are correctly established in the frame of binominal nomenclatureWhich name must be used in case of name conflictsHow scientific literature must cite names Zoological nomenclature is independent of other systems of nomenclature, for example botanical nomenclature. 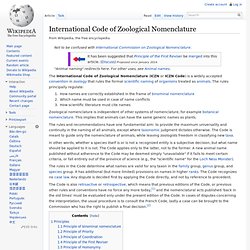 This implies that animals can have the same generic names as plants. In other words, whether a species itself is or is not a recognized entity is a subjective decision, but what name should be applied to it is not. The Code applies only to the latter, not to the former. A new animal name published without adherence to the Code may be deemed simply "unavailable" if it fails to meet certain criteria, or fall entirely out of the province of science (e.g., the "scientific name" for the Loch Ness Monster).

Principles[edit] Taxon. The idea of a "natural system" of classification goes back to the dawn of scientific nomenclature in the mid-18th century, as indicated by the title of Carolus Linnaeus' 1758 Systema Naturae. 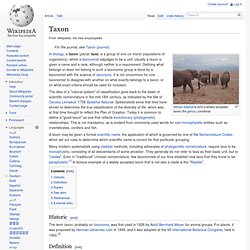 Systematists since that time have striven to determine the true classification of the diversity of life, which was at that time thought to reflect the Plan of Creation. Today it is common to define a "good taxon" as one that reflects evolutionary (phylogenetic) relationships. This is not mandatory, as is evident from commonly used words for non-monophyletic entities such as invertebrates, conifers and fish. A taxon may be given a formal scientific name, the application of which is governed by one of the Nomenclature Codes, which set out rules to determine which scientific name is correct for that particular grouping. Many modern systematists using cladistic methods, including advocates of phylogenetic nomenclature, require taxa to be monophyletic, consisting of all descendants of some ancestor. Reading trees: A quick review. Reading trees: A quick review. 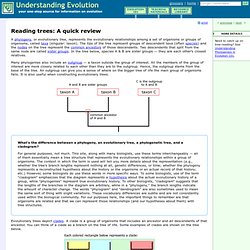 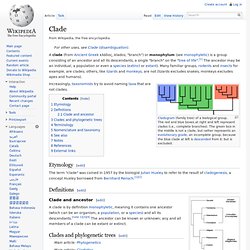 The red and blue boxes at right and left represent clades (i.e., complete branches). The green box in the middle is not a clade, but rather represents an evolutionary grade, an incomplete group, because the blue clade at left is descended from it, but is excluded. Increasingly, taxonomists try to avoid naming taxa that are not clades. Etymology[edit] The term "clade" was coined in 1957 by the biologist Julian Huxley to refer to the result of cladogenesis, a concept Huxley borrowed from Bernhard Rensch.[1][2] Definitions[edit] Gavialidae, Crocodylidae and Alligatoridae are clade names that are here applied to a phylogenetic tree of crocodylians.

Clade and ancestor[edit] A clade is by definition monophyletic, meaning it contains one ancestor (which can be an organism, a population, or a species) and all its descendants. Clades and phylogenetic trees[edit] Terminology[edit] The relationship between clades can be described in several ways: See also[edit] Clade – Evolving Thoughts. This is the first in an irregular series of basic concepts in science, that I suggested to the Seed Bloggers we might do from time to time. 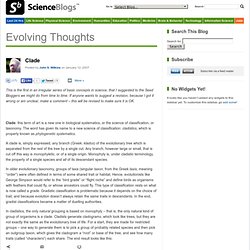 If anyone wants to suggest a revision, because I got it wrong or am unclear, make a comment – this will be revised to make sure it is OK. Clade: this term of art is a new one in biological systematics, or the science of classification, or taxonomy. The word has given its name to a new science of classification: cladistics, which is properly known as phylogenetic systematics. Dinosaur. Dinosaurs are a diverse group of animals of the clade Dinosauria. They first appeared during the Triassic period, 231.4 million years ago, and were the dominant terrestrial vertebrates for 135 million years, from the beginning of the Jurassic (about 201 million years ago) until the end of the Cretaceous (66 million years ago), when the Cretaceous–Paleogene extinction event led to the extinction of most dinosaur groups at the close of the Mesozoic Era. The fossil record indicates that birds evolved from theropod dinosaurs during the Jurassic Period and, consequently, they are considered a subgroup of dinosaurs by many paleontologists.[1] Some birds survived the extinction event that occurred 66 million years ago, and their descendants continue the dinosaur lineage to the present day.[2] Etymology Definition.

Tree of Life on Earth.