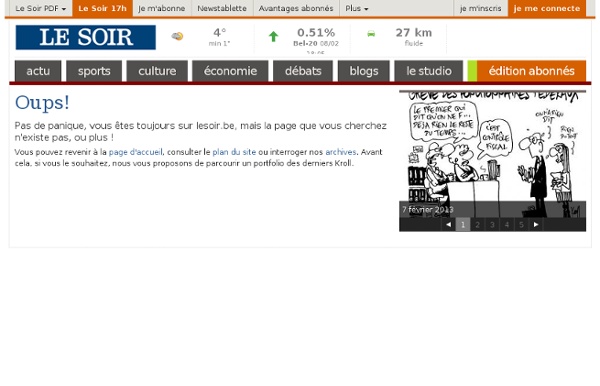 More Activist Intrusions at Belgian Nuclear Base Stoke Worries PrintShareEmailTwitterFacebookLinkedIn By Elaine M. Grossman Global Security Newswire WASHINGTON -- At least three times since January, peace activists have slipped onto a Belgian military base and on one occasion, they contend, made it inside an aircraft shelter where nuclear weapons are stored (see GSN, Feb. 17). The Belgian organization Peace Action in February produced an initial video documenting how five of its members on Jan. 31 wandered unimpeded for roughly an hour at the Kleine Brogel Air Base, northeast of Brussels, before being apprehended by an unarmed guard. Dominique Strauss-Kahn and the silly stereotypes about American and European morals. - By Christopher Hitchens Why is it that we cannot read any discussion of a political sex scandal, or a sex scandal involving a politician, without pseudo-sophisticated comments about the supposedly different morals of Americans and Europeans? And why is it that this goes double if the politician is French, or if the reactions being quoted are from Gallic sources? And when did this annoying journalistic habit become so prevalent? It must have sprung up quite recently, or at least since the time when Charles de Gaulle and John F. Kennedy were presidents of their respective countries. The first man was a strict and fastidious Puritan who never gave his wife Yvonne a moment's cause for complaint, while the second was a sensational debauchee who went as far as importing a Mafia gun-moll into the White House sleeping quarters.

Of the 1%, by the 1%, for the 1% It’s no use pretending that what has obviously happened has not in fact happened. The upper 1 percent of Americans are now taking in nearly a quarter of the nation’s income every year. In terms of wealth rather than income, the top 1 percent control 40 percent. Their lot in life has improved considerably.

Rupert&#039;s Worst Nightmare Come True? Here's Rupert Murdoch's worst nightmare: Nick Davies, the tenacious investigative reporter for the Guardian who has broken much of the Hackinggate story, comes to the U.S. in search of News Corp. crimes and cover-up. Well, it's come true. Davies arrives in New York today. He'll be there until Friday, and then he's going to Los Angeles in pursuit of hacking-type practices that might have been carried out on U.S. soil by Murdoch’s U.S. reporters, by his U.K. reporters working in the U.S., or by private detectives hired by News Corp. If such crimes were committed here, that could mean real trouble for News Corp.

The Belgian case for anarchy - Ezra Klein Okay, not really, but John Lanchester has a piece in the London Review of Books this week about the global economy that includes this tidbit on why Belgium is experiencing healthier economic growth than its European neighbors: “Because Belgium doesn’t have a government,” Lanchester writes. “Thanks to political stalemate in Brussels, it hasn’t had one for 15 months. No government means none of the stuff all the other governments are doing: no cuts and no ‘austerity’ packages. In the absence of anyone with a mandate to slash and burn, Belgian public sector spending is puttering along much as it always was; hence the continuing growth of their economy. It turns out that from the economic point of view, in the current crisis, no government is better than any government — any existing government.”

The Generally Sensible Parisian reaction to DSK The DSK drama has pretty much replaced the weather as the default topic of conversation in Paris this week. It’s very easy to find self-parodic essays in various French journals that try to justify DSK’s alleged crimes, or turn this into an indictment of American “frontier justice.” But among the people I know here, the reaction to the whole event has been completely recognizable. Support flotilla, with all its fa... JPost - Opinion - Columnists For political reasons, I wouldn’t go on the flotilla that’s trying to sail from Greece to Gaza, nor would I board the planned “air flotilla” to Ben-Gurion Airport on Friday. But for weightier political reasons, I hope the people on the boats make it to Gaza and those on the planes get through to the West Bank (even though it’s understood Israel won’t let them). As a Zionist, I don’t identify with these activists. But as a hater of the occupation, I support what they’re doing now. My heart isn’t really with them - but my head is. To start with the cons of the flotilla movement, I doubt there’s a person aboard who thinks Israel should remain a Jewish state.

“A great story to tell to advertisers”: How TPM increased its ad sales revenue 88 percent from last year This June, Talking Points Memo had the biggest ad sales month in its eleven-year history, closing out a half-year period that saw ad sales revenue grow 88 percent over the same period in 2010. First of all: Yowza. Second of all, though: That number, while big, isn’t entirely out of left field. “We’ve been growing at double-digit — sometimes approaching triple-digit — growth ever since we started our direct-sales ad program,” TPM’s founder/editor/publisher, Josh Marshall, told me.

The Zeitgeist Movement Belgium The Zeitgeist Movement is not a political movement. It does not recognize nations, governments, races, religions, creeds or class. Our understandings conclude that these are false, outdated distinctions which are far from positive factors for true collective human growth and potential. Their basis is in power division and stratification, not unity and equality, which is our goal. While it is important to understand that everything in life is a natural progression, we must also acknowledge the reality that the human species has the ability to drastically slow and paralyze progress, through social structures which are out of date, dogmatic, and hence out of line with nature itself. The world you see today, full of war, corruption, elitism, pollution, poverty, epidemic disease, human rights abuses, inequality and crime is the result of this paralysis.

Robert Kuttner: Strauss-Kahn and the European Left Paris -- The apparent self-destruction of Dominique Strauss-Kahn in a New York hotel is emblematic of a European left that has ceased to be much of a progressive alternative, either in terms of lifestyle or policy alternatives. Strauss-Kahn, who until yesterday headed the International Monetary Fund, was the Socialist front-runner to challenge French President Nicolas Sarkozy next year. Polls showed that Strauss-Kahn well ahead of both Sarkozy and far right populist Marine Le Pen. But even before this latest scandal broke, Strauss-Kahn didn't seem like much of a socialist.