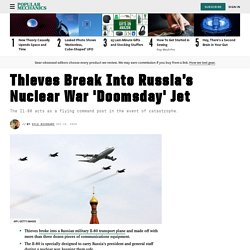 The Il-80 is specially designed to carry Russia’s president and general staff during a nuclear war, keeping them safe. The jet is also designed to allow Russia’s leadership to maintain secure communications with its nuclear forces. A Russian military aircraft designed to allow the country’s leadership to survive and fight a nuclear war has been crippled, the victim of a particularly brazen burglary. MI6, the coup in Iran that changed the Middle East, and the cover-up. The hidden role of a British secret service officer who led the coup that permanently altered the Middle East is to be revealed for the first time since an Observer news story was suppressed in 1985. 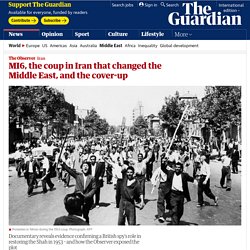 The report, headlined “How MI6 and CIA joined forces to plot Iran coup”, appeared in the 26 May edition but was swiftly quashed. It exposed the fact that an MI6 man, Norman Darbyshire, had run a covert and violent operation to reinstate the Shah of Iran as ruler of the country in 1953. Yet just a few days after the newspaper came out, all fresh evidence of this British operation and of Darbyshire’s identity disappeared from public debate. Bezos hack: UN to address alleged Saudi hacking of Amazon boss's phone.

UN investigators are poised to release a statement about the alleged hacking of Jeff Bezos’s mobile phone after the Guardian revealed details of a forensic analysis that has implicated a WhatsApp account purportedly owned by the crown prince of Saudi Arabia. 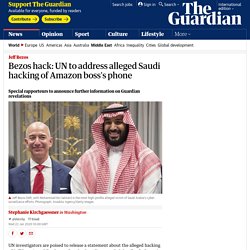 Fresh Cambridge Analytica leak ‘shows global manipulation is out of control’ An explosive leak of tens of thousands of documents from the defunct data firm Cambridge Analytica is set to expose the inner workings of the company that collapsed after the Observer revealed it had misappropriated 87 million Facebook profiles. 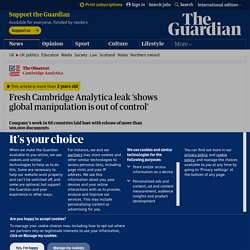 More than 100,000 documents relating to work in 68 countries that will lay bare the global infrastructure of an operation used to manipulate voters on “an industrial scale” are set to be released over the next months. It comes as Christopher Steele, the ex-head of MI6’s Russia desk and the intelligence expert behind the so-called “Steele dossier” into Trump’s relationship with Russia, said that while the company had closed down, the failure to properly punish bad actors meant that the prospects for manipulation of the US election this year were even worse. The release of documents began on New Year’s Day on an anonymous Twitter account, @HindsightFiles, with links to material on elections in Malaysia, Kenya and Brazil. Israel accused of planting mysterious spy devices near the White House. The U.S. government concluded within the past two years that Israel was most likely behind the placement of cellphone surveillance devices that were found near the White House and other sensitive locations around Washington, according to three former senior U.S. officials with knowledge of the matter. 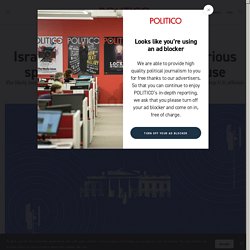 But unlike most other occasions when flagrant incidents of foreign spying have been discovered on American soil, the Trump administration did not rebuke the Israeli government, and there were no consequences for Israel’s behavior, one of the former officials said. Story Continued Below The miniature surveillance devices, colloquially known as “StingRays,” mimic regular cell towers to fool cellphones into giving them their locations and identity information. "I never set out to be a whistleblower": Katharine Gun tells the true story of "Official Secrets" As Katharine Gun told me during our "Salon Talks" conversation, being played by Keira Knightley in a movie was approximately the last thing she ever thought might happen to her. 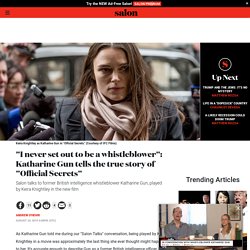 It's accurate enough to describe Gun as a former British intelligence officer, but that sounds way more glamorous than her actual work. A pleasant, highly intelligent woman with a distracted manner and way too much modesty — she told me twice that she thought Edward Snowden was much smarter than she was, which could be disputed — Gun essentially is what she looks like, that being a middle-aged academic. She was a Mandarin-language scholar who landed for a while at GCHQ, the British government's cognate to the NSA, where she presumably tracked "signals intelligence" going back and forth between the U.K. and China.

(She didn't actually tell me that, because she can say very little about the nature of her work, which is normal for former spooks.) Our full conversation is embedded below. Before Oprah’s Book Club, there was the CIA. In the 1950s, the CIA believed books could change the world. 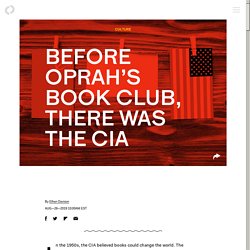 The organization gave millions of dollars to publishers and literary magazines. They printed special lightweight copies of George Orwell’s Animal Farm, which were then loaded onto balloons and sent across borders. Mar-a-Lago trespasser found to have sensors to detect hidden cameras and other items suggesting espionage: CNN. U.S. charges former Air Force officer with spying for Iran.

Biowarfare and "domestic violence" Last week the body of Dr Leonid Strachunsky, described as "World Health Organization expert and head of the anti-microbe Therapy Research Institute," was found in his Moscow hotel room. 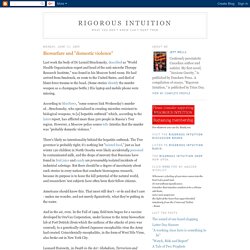 He had arrived from Smolensk, en route to the United States, and died of blunt-force trauma to the head. (Some stories identify the murder weapon as a champagne bottle.) His laptop and mobile phone were missing. According to MosNews, "some sources link Wednesday’s murder of...Strachunsky, who specialized in creating microbes resistant to biological weapons, to [a] hepatitis outbreak" which, according to the latest report, has afflicted more than 500 people in Russia's Tver region. However, a Moscow police source tells Interfax that the murder was "probably domestic violence. " U.S. Knew of Saudi Plan to Seize Missing Journalist, Post Says. U.S. intelligence services intercepted communications of Saudi officials discussing a plan to capture Saudi journalist and government critic Jamal Khashoggi, whose disappearance in Turkey last week threatens to damage the warm ties between the kingdom and Washington. 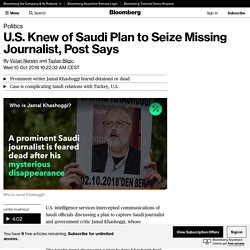 Report: Jamal Khashoggi Was Dismembered by Saudi Agents While Still Alive. Drone Swarm vs. Russian Base in Syria. The Russians have been using drone swarms against the Ukrainians to good effect (blowing up ammo dumps). 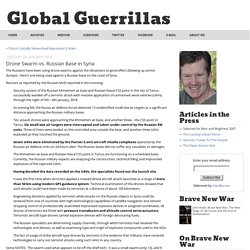 Here's one being used against a Russian base on the coast of Syria. Recount as reported by the Russian MoD reported it this morning: Security system of the Russian Khmeimim air base and Russian Naval CSS point in the city of Tartus successfully warded off a terrorist attack with massive application of unmanned aerial vehicles (UAVs) through the night of 5th – 6th January, 2018. As evening fell, the Russia air defence forces detected 13 unidentified small-size air targets at a significant distance approaching the Russian military bases. Who is attacking Russia’s bases in Syria? A new mystery emerges in the war. BEIRUT — A series of mysterious attacks against the main Russian military base in Syria, including one conducted by a swarm of armed miniature drones, has exposed Russia’s continued vulnerability in the country despite recent claims of victory by President Vladimir Putin.

The attacks have also spurred a flurry of questions over who may be responsible for what amounts to the biggest military challenge yet to Russia’s role in Syria, just when Moscow is seeking to wind its presence down. In the most recent and unusual of the attacks, more than a dozen armed drones descended from an unknown location onto Russia’s vast Hmeimim air base in northwestern Latakia province, the headquarters of Russia’s military operations in Syria, and on the nearby Russian naval base at Tartus. My Father Was a Spy Who Helped Keep the Cold War From Heating Up. Inside the Stasi STD Clinics for 'Troubled' Women. The evils of totalitarianism come in many forms.

But the STD clinics of the German Democratic Republic were something special. HALLE, Germany—“Leave it alone,” she was warned, “you will only harm yourself.” Sixteen-year-old Elke Bauer, as we’ll call her, wasn’t supposed to ask too many questions: not about her sexual assault, not about her mysterious injections, not about the vaginal probing that amounted to torture, not about her virtual imprisonment. The new shadow brokers leak connects the NSA to the stuxnet cyber weapon used on Iran. The mysterious hacking group known as Shadow Brokers came back on Friday to drop its most explosive—and damaging—dump yet, a collection of alleged hacking tools for Microsoft Windows computers.

Buried among this new treasure trove, there are several mentions of previously disclosed NSA top secret programs and software such as “STRAITBIZARRE,” used to control implants remotely, and “JEEPFLEA,” a project to hack the money transferring system SWIFT. These provide yet another hint that these are indeed tools stolen from the NSA’s elite hacking team. Estonia: The Little Spycatcher Who Could. Every year the Estonians come out with an unvarnished and all too accurate assessment of Russian skullduggery. The latest is very interesting indeed. Nobody does it better, but sometimes I wish someone would.

Every year for the past 18 years, the Kaitsepolitseiamet, Estonia’s domestic security service, the unfortunately acronym-ed KAPO, publishes its annual review of the country’s most attention-grabbing incidents in counterintelligence, terrorism, and corruption, categories that very often overlap. Untitled. Newly declassified documents from the Reagan presidential library help explain how the U.S. government developed its sophisticated psychological operations capabilities that – over the past three decades – have created an alternative reality both for people in targeted countries and for American citizens, a structure that expanded U.S. influence abroad and quieted dissent at home.

The documents reveal the formation of a psyops bureaucracy under the direction of Walter Raymond Jr., a senior CIA covert operations specialist who was assigned to President Reagan’s National Security Council staff to enhance the importance of propaganda and psyops in undermining U.S. adversaries around the world and ensuring sufficient public support for foreign policies inside the United States. But Raymond appears to have grasped his true importance. Until the 1980s, psyops were normally regarded as a military technique for undermining the will of an enemy force by spreading lies, confusion and terror. The Spy Who Billed Me. More on The Shock Doctrine: Further reading on Ewen Cameron.

Leonard Cohen: Just the Facts. Maybe intelligence operatives wear tuxedos, drive Aston Martins, drink martinis, and say their names in reverse order, and maybe there’s no need to wonder about anyone who doesn’t fit that bill. On the other hand, if (just say) an intelligence operative might be good at covering his tracks and assuming the appearance of being something other than an intelligence operative (like a poet-novelist turned folk singer turned pop star, say), then maybe tracking his activities, seeing which people he associates with, where his money comes from, which groups are backing him, where he travels to and when, what sort of things happen around him or what kind of coded messages he leaves behind ~ crazy stuff like that ~ would be the logical way to proceed?

Please note, this post is not meant to assert that Leonard is now or ever has been an intelligence operative. A Scientific Outlook: CCF, Bertrand Russell, William Empson, & The New Critics (Occult Yorkshire 11) Donald Ewen Cameron. Donald Ewen Cameron was born in Scotland in 1901. He graduated from the University of Glasgow in 1924. [cia-drugs] Article on Dr Donald Ewen Cameron in The Scotsman. The Secret (Insurance) Agent Men - latimes. Untitled.