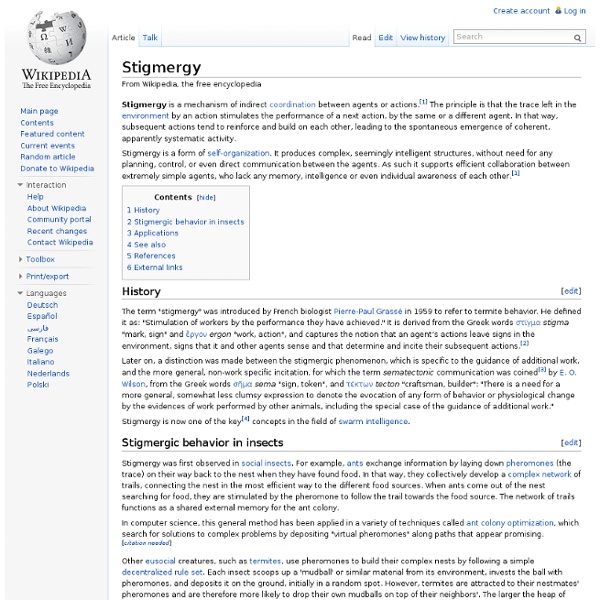 Stigmergy is a mechanism of indirect coordination between agents or actions.[1] The principle is that the trace left in the environment by an action stimulates the performance of a next action, by the same or a different agent. In that way, subsequent actions tend to reinforce and build on each other, leading to the spontaneous emergence of coherent, apparently systematic activity. Stigmergy is a form of self-organization. It produces complex, seemingly intelligent structures, without need for any planning, control, or even direct communication between the agents. As such it supports efficient collaboration between extremely simple agents, who lack any memory, intelligence or even individual awareness of each other.[1] History[edit] The term "stigmergy" was introduced by French biologist Pierre-Paul Grassé in 1959 to refer to termite behavior. Stigmergy is now one of the key[4] concepts in the field of swarm intelligence. Stigmergic behavior in lower organisms[edit] Applications[edit]

Main Page Wiki Type of website that visitors can edit A wiki ( WIK-ee) is a hypertext publication collaboratively edited and managed by its own audience directly using a web browser. A typical wiki contains multiple pages for the subjects or scope of the project and could be either open to the public or limited to use within an organization for maintaining its internal knowledge base. Wikis are enabled by wiki software, otherwise known as wiki engines. The online encyclopedia project Wikipedia is the most popular wiki-based website, and is one of the most widely viewed sites in the world, having been ranked in the top ten since 2007.[3] Wikipedia is not a single wiki but rather a collection of hundreds of wikis, with each one pertaining to a specific language. In addition to Wikipedia, there are hundreds of thousands of other wikis in use, both public and private, including wikis functioning as knowledge management resources, notetaking tools, community websites, and intranets. Characteristics Editing

Main Page - Wikimania Article about Negatives of Collective Intelligence (with rebutle On "Digital Maoism: The Hazards of the New Online Collectivism" By Jaron Lanier Responses to Lanier's essay from Douglas Rushkoff, Quentin Hardy, Yochai Benkler, Clay Shirky, Cory Doctorow, Kevin Kelly, Esther Dyson, Larry Sanger, Fernanda Viegas & Martin Wattenberg, Jimmy Wales, George Dyson, Dan Gillmor, Howard Rheingold Now, another big idea is taking hold, but this time it's more painful for some people to embrace, even to contemplate. It's nothing less than the migration from individual mind to collective intelligence. I call it "here comes everybody", and it represents, for good or for bad, a fundamental change in our notion of who we are. Lately, there's been a lot of news concerning the Wikipedia and other user-generated websites such as Myspace, Flickr, and others. For example, in today's Wall Street Journal "portals" column, Lee Gomes ("Why Getting the User To Create Web Content Isn't Always Progress", June 7, 2006, p B1) writes: "Mash-ups", which allow active (vs. "The mass.

Wikipedia, the free encycloped For Wikipedia's non-encyclopedic visitor introduction, see Wikipedia:About. Wikipedia ( i/ˌwɪkɨˈpiːdiə/ or i/ˌwɪkiˈpiːdiə/ WIK-i-PEE-dee-ə) is a free-access, free content Internet encyclopedia, supported and hosted by the non-profit Wikimedia Foundation. Those who can access the site can edit most of its articles. Jimmy Wales and Larry Sanger launched Wikipedia on January 15, 2001. Openness Differences between versions of an article are highlighted as shown. Unlike traditional encyclopedias, Wikipedia follows the procrastination principle[notes 3] regarding the security of its content.[18] It started almost entirely open—anyone could create articles, and any Wikipedia article could be edited by any reader, even those who did not have a Wikipedia account. Restrictions In certain cases, all editors are allowed to submit modifications, but review is required for some editors. The editing interface of Wikipedia Review of changes Vandalism Policies and laws See also: Wikipedia:Five Pillars Governance

Results of Wikipedia Research These are some of the drafts that went into my dissertation on Wikipedia. Open Content Communities In this brief essay I sketch the characteristics of an open content community by considering a number of prominent examples, reviewing sociological literature, teasing apart the concepts of open and voluntary implicit in most usages of the term, and I offer a definition in which the much maligned possibility of "forking" is actually an integral aspect of openness. Four Short Stories about the Reference Work Many histories can be written of the reference work. A Case of Mutual Aid: Wikipedia, Politeness, and Perspective Taking This paper explores the character of "mutual aid" and interdependent decision making within the Wikipedia. Is the Wikipedia Neutral? Claims of neutrality and accusations of bias are common themes of contemporary discourse about the media, government, education, and technology. Wikipedia's Heritage: Vision, Pragmatics, and Happenstance

Jimmy Wales apophenia: Wikipedia, academia and Seigenthaler For the last couple of weeks, i’ve been watching the Wikipedia bru-ha-ha. As folks probably know, i got really upset a while back when folks were talking about Wikipedia being the essential collection of knowledge, meant to replace school books and other refereed knowledge containers. I still strongly believe that Wikipedia will not be that. So, when i heard about Seigenthaler, i rolled my eyes. Seigenthaler had a very reasonable conversation with Wikipedia, telling them of the troubles. What pissed me off more was how the academic community pointed to this case and went “See! And then, as if i couldn’t be more cranky, i watched Internet Researchers take up the same anti-Wikipedia argument. Imagine that we are designing a restaurant. All too often we blame the technology for problematic human behaviors. I am worried about how academics are treating Wikipedia and i think that it comes from a point of naivety.

Ross Mayfields Weblog: Heavy Lifting One interesting Wikimania session by Seth Anthony presented some research on contribution patterns. My notes: Only 10% of edits are high content edits. 30% of those are anonymous, none are by admins, 52% are by someone with a userpage, none have a barnstar. The people who are creating content are relatively new, not versed in style guides and bureaucracy. Their use of Wikipedia speeds up a little bit through use, but not much. Admins, on the other hand, are relatively efficient in their edits and have a consistent pace. In other words, the core community within the Power Law of Participation, the 500 people that do 50% of the edits, or 0.5% of the registered population -- does the heavy lifting for subject experts. I should highlight, as with most things, Wikipedia is an exception for wiki communities.

Social computation and creativity » Blog Archive » Was Wikipedia Jimmy Wales, a founder of Wikipedia in his recent talks suggests that Wikipedia is not a technological innovation, but a purely social one: When Wikipedia was started in 2001, all of its technology and software elements had been around since 1995. Its innovation was entirely social - free licensing of content, neutral point of view, and total openness to participants, especially new ones. In his view, Wikipedia is not an emergent phenomena of the wisdom of crowds, where thousands of independent individuals contribute each a bit of their knowledge, but instead is a relatively well connected small community, pretty much like any traditional organization, e.g. one that created Encyclopedia Britannica. I know that it is quite natural for entrepreneurs to focus more on organizational aspects because that is what they deal with most of the time, as well as it is common for technologists to focus mainly on technology. I first discovered wiki quite late, in the summer of 2002.

Dirk Riehle: How and Why Wikipedia Works: An Interview with Ange See here for a citable reference of this interview (as well as errata) and here for the paper's PDF. The article was featured in a Harvard Business School case and is included in other corpora as well. This work is made available under the Creative Commons BY-SA license. This article presents an interview with Angela Beesley, Elisabeth Bauer, and Kizu Naoko. All three are leading Wikipedia practitioners in the English, German, and Japanese Wikipedias and related projects. Categories and Subject Descriptors H.4 Information Systems Applications, K.3 Computers and Education, K.4 Computers and Society General Terms Design, Economics, Human Factors Keywords Wiki, Wikipedia, Wikimedia Foundation, CSCW, collaboration software, collaboration processes, collective intelligence. Dirk Riehle (DR): Hello! Angela Beesley (AB): I am Angela Beesley. I'm a member of the Wikimedia Communication Committee. Elisabeth Bauer (EB): I am Elian on Wikipedia. Informal roles are a bit harder to describe. DR: Thanks!

untitled Wikipedia is a free encyclopedia, collaboratively being constructed at the web site using the Wiki metaphor. There are four main differences between Wikipedia and E2: Editing: Nobody owns a node; (almost) everything can be edited by anybody, even without logging in. History The project was started in January 2001 by Larry Sanger, a philosophy Ph.D., and Jimbo Wales, an internet entrepreneur. The most important early actions by Sanger were the formulation and enforcement of the NPOV policy, setting up the site's general link structure, and the weeding out of non-encyclopedic materials. In 2001, RMS endorsed Wikipedia as the embodiment of GNUpedia, a project of constructing a free encyclopedia and learning resource which he had envisioned earlier. Many hundred writers contribute on a regular basis. Occasionally, obnoxious users ("vandals") have to be banned from the site. As of August 2005, Wikipedia contained more than 700,000 genuine encyclopedia articles.