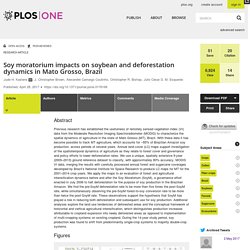 With these data it has become possible to track MT agriculture, which accounts for ~85% of Brazilian Amazon soy production, across periods of several years. Annual land cover (LC) maps support investigation of the spatiotemporal dynamics of agriculture as they relate to forest cover and governance and policy efforts to lower deforestation rates. We use a unique, spatially extensive 9-year (2005–2013) ground reference dataset to classify, with approximately 80% accuracy, MODIS VI data, merging the results with carefully processed annual forest and sugarcane coverages developed by Brazil’s National Institute for Space Research to produce LC maps for MT for the 2001–2014 crop years. Copyright: © 2017 Kastens et al. Tree-clearing - WWF-Australia. Impacts Deforestation and tree-clearing is the major cause of habitat loss for many threatened and endangered species. 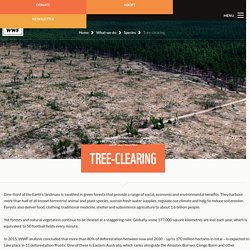 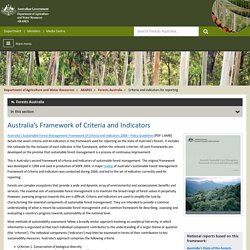 It includes the rationale for the inclusion of each indicator in the framework, within the relevant criterion. All such frameworks are developed on the premise that sustainable forest management is a process of continuous improvement. International Day for Biological Diversity 22 May. Forests and forest soils: an essential contribution to agricultural production and global food security   Forests and forest soils play a broad, complex and interactive role within the environment. 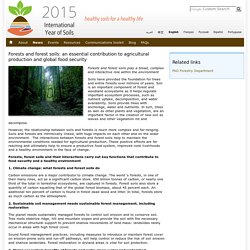 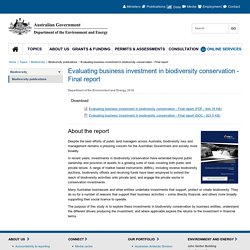 In recent years, investments in biodiversity conservation have extended beyond public ownership and provision of assets to a growing suite of tools covering both public and private tenure. A range of market based instruments (MBIs), including reverse biodiversity auctions, biodiversity offsets and revolving funds have been employed to extend the reach of biodiversity activities onto private land, and engage the private sector in conservation investments. Many Australian businesses and other entities undertake investments that support, protect or create biodiversity.

They do so for a number of reasons that support their business activities – some directly financial, and others more broadly supporting their social licence to operate. Sustainable Business Australia. Global Warming Solutions: Stop Deforestation. Stand for Trees - Homepage. Deforestation Success Stories (2014) Sustainable Development Goals Australia. 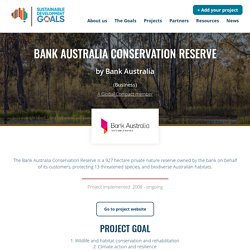 The bank’s purpose is to create mutual prosperity through positive economic, social, environmental, and cultural impact. In 2008, the bank purchased the first of three conservation properties, in order to act on customer concerns about climate action and protecting threatened animal and plant species. The Bank Australia Conservation Reserve has since grown to a 927 hectare private nature reserve, and the bank has invested over $2.5 million over 10 years, planting nearly 100 000 trees and working with community groups, bank customers and staff to rehabilitate the reserve.

The reserve is a world-first project for a bank. It is located in the West Wimmera region of Victoria, an area of Australia within Habitat 141, a landscape scale strategic conservation effort to create a wildlife corridor in a high value conservation region of Australia. Solutions to Deforestation. Greenpeace is campaigning for a future that will allow our forests to thrive – filled with unique wildlife and able to sustain local people and economies whilst cleaning the air of carbon: a future with no deforestation. 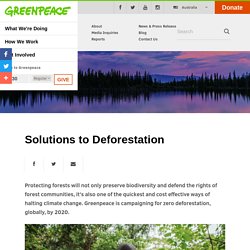 This may be ambitious, but it is possible. In fact, because stopping forest destruction is one of the easiest and most cost effective ways to prevent catastrophic climate change, we think it’s essential. How Much Deforestation in 2018? An Area the Size of Belgium Lost. Major UK supermarkets ‘buy corned beef from meat firm linked to illegal razing of Amazon rainforests’ British supermarkets are selling corned beef from a company accused of involvement in illegal deforestation in the Amazon, according to environmental investigators. 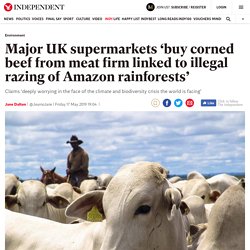 Morrisons, Waitrose, Iceland, Lidl and the Co-Op all buy Brazilian corned beef sourced from JBS, a meat company that has reportedly sourced cattle from farms contributing to destruction of the world’s largest rainforest. Environmental organisation Friends of the Earth said it made the apparent link by tracing the supply chains of tinned corned beef sold in British supermarkets under their own labels or other meat brands’. We’ll tell you what’s true. You can form your own view. From 15p €0.18 $0.18 USD 0.27 a day, more exclusives, analysis and extras. 'Global deforestation hotspot': 3m hectares of Australian forest to be lost in 15 years. Australia is in the midst of a full-blown land-clearing crisis. 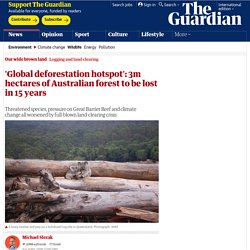 Projections suggest that in the two decades to 2030, 3m hectares of untouched forest will have been bulldozed in eastern Australia. The crisis is driven primarily by a booming livestock industry but is ushered in by governments that fail to introduce restrictions and refuse to apply existing restrictions. And more than just trees are at stake. Australia has a rich biodiversity, with nearly 8% of all Earth’s plant and animal species finding a home on the continent. 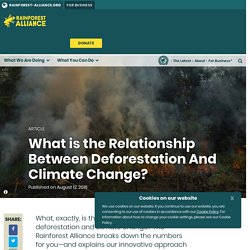 The Rainforest Alliance breaks down the numbers for you—and explains our innovative approach to keeping forests standing. Among the many gifts forests give us is one we desperately need: help with slowing climate change. Trees capture greenhouse gases (GHGs) like carbon dioxide, preventing them from accumulating in the atmosphere and warming our planet. When we clear forests, we’re not only knocking out our best ally in capturing the staggering amount of GHGs we humans create (which we do primarily by burning fossil fuels at energy facilities, and of course, in cars, planes, and trains).

We’re also creating emissions by cutting down trees: when trees are felled, they release into the atmosphere all the carbon they’ve been storing. Healthy forests and vibrant communities are an essential part of the global climate solution. About us. BHP is a world-leading resources company. We extract and process minerals, oil and gas, with more than 62,000 employees and contractors, primarily in Australia and the Americas. Our products are sold worldwide, with sales and marketing led through Singapore and Houston, United States. Our global headquarters are in Melbourne, Australia.

We operate under a Dual Listed Company structure with two parent companies (BHP Group Limited and BHP Group Plc) operated as if we were a single economic entity, which we refer to as BHP. We are run by a unified Board and management. BHP Billiton Launches Five Rivers Conservation Project. BHP Billiton today launched the Five Rivers Conservation Project in partnership with the Tasmanian Land Conservancy and Conservation International, pledging A$13.4 million for conservation and ongoing management of 11,000 hectares of land in Tasmania, Australia. The land, near Cradle Mountain and Lake St Clair, incorporates areas that are covered by the Tasmanian World Heritage area including old growth forests, wild rivers, and alpine wetlands.

Skullbone Plains, still considered a reserve in its own right, has been incorporated into the Five Rivers Reserve landscape management methods. Substantial areas of the Five Rivers Reserve are in or adjacent to the Tasmanian Wilderness World Heritage Area, and neighbouring trawtha makuminya, the protected area owned and managed by the Tasmanian Aboriginal Centre. The TLC has developed an Environmental Account for Five Rivers Reserve, using an asset condition accounting method created by the Wentworth Group of Concerned Scientists. Managing Five Rivers Reserve. Effects of Deforestation. The United States Environmental Protection Agency defines deforestation as the "permanent removal of standing forests. " The removal, however, occurs for a variety of different reasons and has a variety of devastating consequences.

Tlc strategicplan2016 Final email 1. SDG Indicators — SDG Indicators. The following global indicator framework was developed by the Inter-Agency and Expert Group on SDG Indicators (IAEG-SDGs) and agreed upon, including refinements on several indicators, at the 48th session of the United Nations Statistical Commission held in March 2017. The global indicator framework was later adopted by the General Assembly on 6 July 2017 and is contained in the Resolution adopted by the General Assembly on Work of the Statistical Commission pertaining to the 2030 Agenda for Sustainable Development (A/RES/71/313), Annex.

Native forest area. Global Compact Network Australia. Forests cover 30% of Earth’s land area and provide approximately 1.6 billion people, including 70 million indigenous people, with a livelihood.1 Humanity depends on forests as a buffer against climate change through the removal of carbon dioxide in the air or, in the case of mature forests, as a carbon store. 2030 Agenda for Sustainable Development and the Sustainable Development Goals. Definition & Facts. Goal 15- sustainable development goal.

The global indicator framework was developed by the Inter-Agency and Expert Group on SDG Indicators (IAEG-SDGs) and agreed to, as a practical starting point at the 47th session of the UN Statistical Commission held in March 2016. The report of the Commission, which included the global indicator framework, was then taken note of by ECOSOC at its 70th session in June 2016. More information. 12 reasons why forests are important. 4. Forests give us oxygen A single mature deciduous tree generates enough oxygen for two to ten people. Stand for Trees - Homepage. Soy moratorium impacts on soybean and deforestation dynamics in Mato Grosso, Brazil.

Abstract Previous research has established the usefulness of remotely sensed vegetation index (VI) data from the Moderate Resolution Imaging Spectroradiometer (MODIS) to characterize the spatial dynamics of agriculture in the state of Mato Grosso (MT), Brazil. With these data it has become possible to track MT agriculture, which accounts for ~85% of Brazilian Amazon soy production, across periods of several years. Annual land cover (LC) maps support investigation of the spatiotemporal dynamics of agriculture as they relate to forest cover and governance and policy efforts to lower deforestation rates. We use a unique, spatially extensive 9-year (2005–2013) ground reference dataset to classify, with approximately 80% accuracy, MODIS VI data, merging the results with carefully processed annual forest and sugarcane coverages developed by Brazil’s National Institute for Space Research to produce LC maps for MT for the 2001–2014 crop years. Copyright: © 2017 Kastens et al.