Romney’s Death Squad Ties: Bain Launched with Millions from Oligarchs Behind Salvadoran Atrocities. This is a rush transcript. 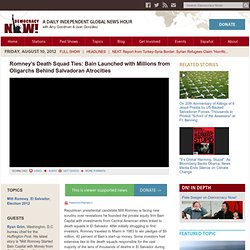 Copy may not be in its final form. AMY GOODMAN: We begin today with new scrutiny Republican candidate Mitt Romney is facing about his record at the private equity firm Bain Capital. The latest controversy surrounding Bain concerns how Romney helped found the company with investments from Central American elites linked to death squads in El Salvador. After initially struggling to find investors, Romney traveled to Miami in 1983 to win pledges of $9 million, 40 percent of Bain’s start-up money. El Salvador death squads, huffington post. A Pattern of U.S. 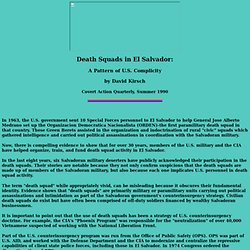 Complicity by David Kirsch Covert Action Quarterly, Summer 1990. Death squad. A death squad is an armed squad that conducts extrajudicial killings, and forced disappearances of persons for the purposes of political repression, genocide, or revolutionary terror. 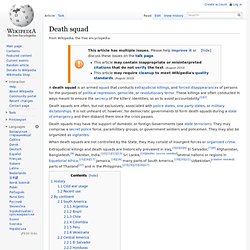 These killings are often conducted in ways meant to ensure the secrecy of the killers' identities, so as to avoid accountability.[1][2] Death squads are often, but not exclusively, associated with police states, one party states, or military dictatorships. It is not unheard of, however, for democratic governments to form death squads during a state of emergency and then disband them once the crisis passes. Death squads may have the support of domestic or foreign Governments (see state terrorism). They may comprise a secret police force, paramilitary groups, or government soldiers and policemen. Mit Romney. DN! 1973 Chilean Coup. DN!: El Salvador. The CIA’s “Mystery Man” in Bagdad: Salvador-Style Death Squads in Iraq. 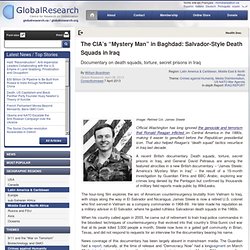 James Steele Official Washington has long ignored the genocide and terrorism that Ronald Reagan inflicted on Central America in the 1980s, making it easier to genuflect before the Republican presidential icon. That also helped Reagan’s “death squad” tactics resurface in Iraq last decade. A recent British documentary Death squads, torture, secret prisons in Iraq, and General David Petraeus are among the featured atrocities in a new British documentary – “James Steele: America’s Mystery Man in Iraq” – the result of a 15-month investigation by Guardian Films and BBC Arabic, exploring war crimes long denied by the Pentagon but confirmed by thousands of military field reports made public by WikiLeaks. Pearltree support. James Steele (US Colonel) Steele was mentioned by US Ambassador Paul Wolfowitz, former Secretary of Defense Donald Rumsfeld and others, and was present in various high-profile meetings while keeping a secret role. 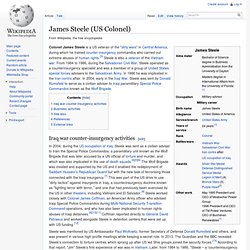 In 2013, The Guardian and the BBC revealed Steele's connection to torture centres which sprang up after US led Shia groups joined the security forces.[13] According to that report, "Jim" Steele's first experience of war was in Vietnam. Abu Ghraib torture and prisoner abuse. Lynndie England holding a leash attached to a prisoner, known to the guards as "Gus", who is lying on the floor This image of a prisoner being tortured has become internationally famous, eventually making it onto the cover of The Economist (see "Media" below) From late 2003 to early 2004, during the Iraq War, military police personnel of the United States Army and the Central Intelligence Agency[1] committed human rights violations against prisoners held in the Abu Ghraib prison. 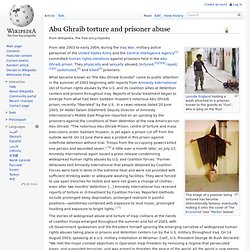 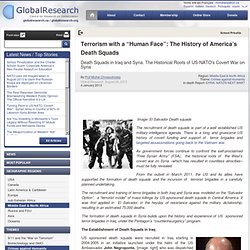 There is a long and gruesome US history of covert funding and support of terror brigades and targeted assassinations going back to the Vietnam war. As government forces continue to confront the self-proclaimed “Free Syrian Army” (FSA), the historical roots of the West’s covert war on Syria –which has resulted in countless atrocities– must be fully revealed. Prof Michel Chossudovsky. About the author: Michel Chossudovsky is an award-winning author, Professor of Economics (emeritus) at the University of Ottawa, Founder and Director of the Centre for Research on Globalization (CRG), Montreal and Editor of the globalresearch.ca website. 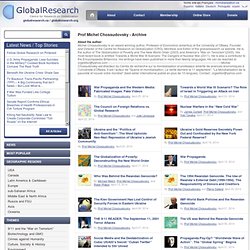 He is the author of The Globalization of Poverty and The New World Order (2003) and America’s “War on Terrorism”(2005). His most recent book is entitled Towards a World War III Scenario: The Dangers of Nuclear War (2011). He is also a contributor to the Encyclopaedia Britannica. His writings have been published in more than twenty languages. El Salvador's Children of War. From 1979 until 1992, El Salvador was mired in a civil war that left 75,000 people dead and untold numbers displaced or unaccounted for. 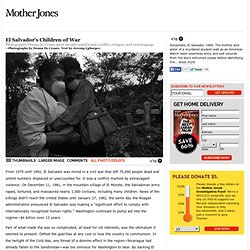 It was a conflict marked by extravagant violence: On December 11, 1981, in the mountain village of El Mozote, the Salvadoran army raped, tortured, and massacred nearly 1,000 civilians, including many children. News of the killings didn't reach the United States until January 27, 1982, the same day the Reagan administration announced El Salvador was making a "significant effort to comply with internationally recognized human rights. " Washington continued to pump aid into the regime—$4 billion over 12 years.