Build Brain Power with these 21 Resources 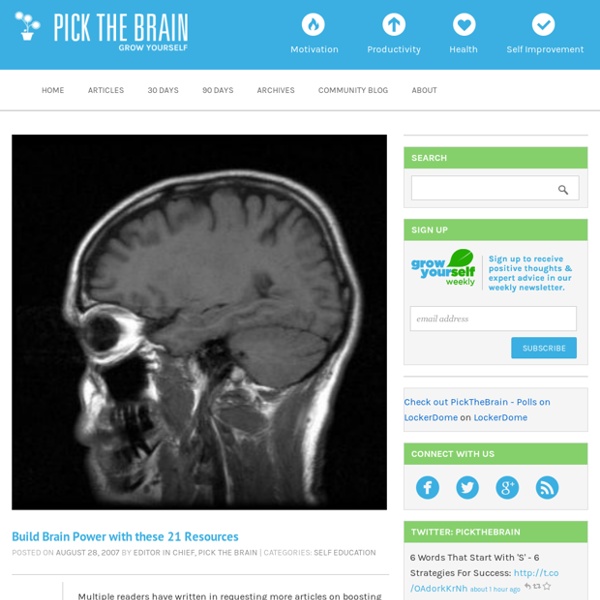 Stages of Learning to Say "No" Your rating: None Average: 4 (1 vote) One of the most important skills we can learn that will help us manage and fulfill our priorities is to say "No." Once we get there, it becomes easier and easier, but initially it can be extremely awkward and unpopular with others. Knowing the stages we’ll go through can help us realize that what’s happening is natural and that its not just that we can’t seem to do it. Stage 1: Identifying Opportunities In this initial stage we have identified our need to learn to say "No" and have made it a goal. Stage 2: Backing Up This next stage of learning and practicing saying "No" is the most difficult. Stage 3: Doing the Right Thing at the Right Time Within this stage, we have arrived at a place where we are able to say no at the right time: immediately. Author's Bio: Donna Birk is a writer, trainer, coach, and Licensed Social Worker.

Viral restoration of dopamine to the nucleus accumbens uptake and amphetamine-induced response Viral restoration of dopamine to the nucleus accumbens is sufficient to induce a locomotor response to amphetamine by Heusner CL, Hnasko TS, Szczypka MS, Liu Y, During MJ, Palmiter RD. Department of Biochemistry, University of Washington, 98195, Seattle, WA, USA Brain Res. 2003 Aug 8;980(2):266-74ABSTRACT Administration of amphetamine to mice evokes hyperlocomotion. Dopamine deficient (DD) mice, in which tyrosine hydroxylase (TH) has been specifically inactivated in dopaminergic neurons, have a blunted response to amphetamine, indicating that the hyperlocomotive response requires dopamine. Dopamine production can be restored to specific brain regions by using adeno-associated viruses expressing TH and GTP cyclohydrolase 1 (GTPCH1). Restoration of dopamine specifically to the nucleus accumbens (NAc) of DD mice completely restores the ability of these mice to respond to amphetamine.

Brain Wave Entrainment and Hypnosis During hypnosis the brain shows a characteristic sequence of brain wave activity. This can now be artificially reproduced through the use of audio tones; a process known as brain wave entrainment. If you are in a particular state, for example, very anxious, then you will produce a unique 'signature' of brainwaves. These are states that can take a long time and a lot of physical effort to attain. This page is going to show you how this is done. Firstly, we are going to review the different and the states that are generally associated with them. Secondly, we will look at that have been observed in people while undergoing hypnosis. Thirdly we will look at and how it has been used to produce individual and groups of brain waves to modify peoples' state. Fourthly we will look at brain wave entrainment specifically with regard to . Finally there are some links to so you can try it for yourself. Types of Brain Waves ~200Hz Self awareness, higher levels of insight and information. ~100Hz 38 - 90Hz .