The Naked Truth: 30% of US Unicorns Have No Patents. It seems that not a day goes by without a commentary about Unicorns, a Silicon Valley-coined term used to describe a startup (pre-exit) with a valuation exceeding $1 billion. 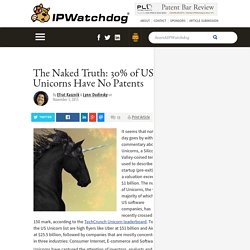 The number of Unicorns, the vast majority of which are US software companies, has recently crossed the 150 mark, according to the TechCrunch Unicorn leaderboard. Topping the US Unicorn list are high flyers like Uber at $51 billion and Airbnb at $25.5 billion, followed by companies that are mostly concentrated in three industries: Consumer Internet, E-commerce and Software. Unicorns have captured the attention of investors, analysts and other market observers who are trying to understand the factors driving the formidable valuations commanded by these mythical ventures and, in some cases, bet on their future, or even announce their sudden demise.

The Data Sample: Over 65% Are Software Companies Our Findings: Value Distribution Not Correlated with IP Distribution Should Unicorn Investors be Alarmed by the IP Gap? 2015 Tech IPO Pipeline Report - CB Insights. The 2015 Tech IPO Pipeline has 588 investor-backed private technology companies in the United States today with valuations, real or rumored, of greater than $100 million and who are demonstrating significant momentum based on our proprietary private company Mosaic ratings. 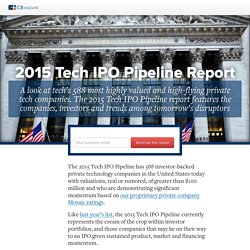 Like last year’s list, the 2015 Tech IPO Pipeline currently represents the cream of the crop within investor portfolios, and those companies that may be on their way to an IPO given sustained product, market and financing momentum. Of course, it should be explicitly mentioned that not all of these 588 companies will make it to an IPO next year or ever.

Many have just crossed the $100M valuation threshold and, with the time to IPO increasing significantly, have their work cut out for them before they can even ponder the option of going public. Others among this group will never actually breakthrough to the level needed to be deemed public market worthy, or will be acquired along the way. New York trounces Massachusetts. The Naked Truth: 30% of US Unicorns Have No Patents. ETFs suffer from a ‘chessboard’ problem. The story goes that a ruler of India was so pleased with one of his palace wise men, who had invented the game of chess, that he offered him a reward of his own choosing. 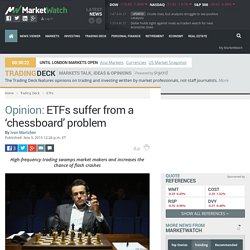 The man, being a mathematician, told the ruler that he would like just one grain of rice on the first square of the chess board, double that number on the second square, and double that number on each of the next 62 squares. While the first half of the chessboard could manage the amount of rice requested, the second part of the chessboard should have contained more rice than available in the palace. Since a chessboard has 64 squares, the number of grains is 263 (9,223,372,036,854,775,808) — that's over 9 quintillion. We think exchange traded funds have reached a second-half-of-the-chessboard threshold. ETFs are a great idea if they serve an investment objective to gain exposure to a specific index, sector or asset class.

We consider the third quarter of 2015 to be a disaster for the ETF industry. Nine Out of Ten of the Internet’s Top Websites Are Leaking Your Data. The vast majority of websites you visit are sending your data to third-party sources, usually without your permission or knowledge. 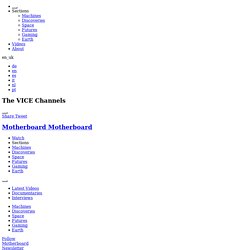 That’s not exactly breaking news, but the sheer scale and ubiquity of that leakage might be. Tim Libert, a privacy researcher with the University of Pennsylvania, has published new peer-reviewed research that sought to quantify all the “privacy compromising mechanisms” on the one million most popular websites worldwide. His conclusion? “Findings indicate that nearly 9 in 10 websites leak user data to parties of which the user is likely unaware.” Libert used his own open source software called webXray—the same program he’s used in the past to analyze trackers installed on health and porn websites—and he found that not only were most siphoning user data, they were sharing it all over the place.

In other words, when you visit a website—say, Airbnb.com, Yahoo.com, or Motherboard.tv—that site will likely forward your user data to nine other, outside websites. Is Your Company Encouraging Employees to Share What They Know? Many of the things we need to know to be successful – to innovate, collaborate, solve problems, and identify new opportunities – aren’t learned simply through schooling, training, or personal experience. 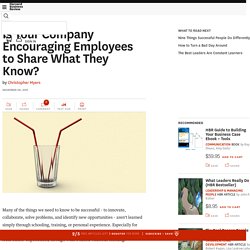 Especially for today’s knowledge-based work, much of what we need to know we learn from others’ experiences, through what’s called vicarious learning. Organizations know this learning is important, which is why they invest significant resources in handbooks, protocols, formal mentoring programs, and knowledge management systems to share employees’ experiences. Yet analyst estimates suggest that the companies in the Fortune 500 still lose a combined $31.5 billion per year from employees failing to share knowledge effectively. By trying to recreate the wheel, repeating others’ mistakes, or wasting time searching for specialized information or expertise, employees incur productivity costs and opportunity costs for the organization.