Kwabena Boahen on a computer that works like the brain 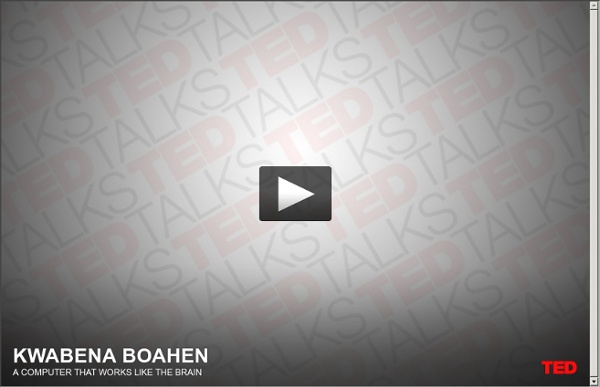 Bionics Bionics (also known as bionical creativity engineering) is the application of biological methods and systems found in nature to the study and design of engineering systems and modern technology.[citation needed] The transfer of technology between lifeforms and manufactures is, according to proponents of bionic technology, desirable because evolutionary pressure typically forces living organisms, including fauna and flora, to become highly optimized and efficient. Ekso Bionics is currently developing and manufacturing intelligently powered exoskeleton bionic devices that can be strapped on as wearable robots to enhance the strength, mobility, and endurance of soldiers and paraplegics. The term "biomimetic" is preferred when reference is made to chemical reactions. Examples of bionics in engineering include the hulls of boats imitating the thick skin of dolphins; sonar, radar, and medical ultrasound imaging imitating the echolocation of bats. History[edit] Methods[edit] Examples[edit]

Hierarchical temporal memory Hierarchical temporal memory (HTM) is an online machine learning model developed by Jeff Hawkins and Dileep George of Numenta, Inc. that models some of the structural and algorithmic properties of the neocortex. HTM is a biomimetic model based on the memory-prediction theory of brain function described by Jeff Hawkins in his book On Intelligence. HTM is a method for discovering and inferring the high-level causes of observed input patterns and sequences, thus building an increasingly complex model of the world. Jeff Hawkins states that HTM does not present any new idea or theory, but combines existing ideas to mimic the neocortex with a simple design that provides a large range of capabilities. HTM combines and extends approaches used in Bayesian networks, spatial and temporal clustering algorithms, while using a tree-shaped hierarchy of nodes that is common in neural networks. HTM structure and algorithms[edit] An example of HTM hierarchy used for image recognition Bayesian networks[edit]

Hierarchical Temporal Memory We've completed a functional (and much better) version of our .NET-based Hierarchical Temporal Memory (HTM) engines (great job Rob). We're also still working on an HTM based robotic behavioral framework (and our 1st quarter goal -- yikes - we're late). Also, we are NOT using Numenta's recently released run-time and/or code... since we're professional .NET consultants/developers, we decided to author our own implementation from initial prototypes authored over the summer of 2006 during an infamous sabbatical -- please don't ask about the "Hammer" stories. I've been feeling that the team has not been in synch in terms of HTM concepts, theory and implementation. We have divided our HTM node implementation into 2 high level types. 1) Sensor Node and 2) Cortical Node. An HTM sensor node provides a mechanism to memorize sensor inputs and sequences of those inputs. EXAMPLEtemp = temperature sensor pressure = barometric sensor light = luminousity sensor moisture = humidity sensor

On Intelligence - Welcome Redwood Center for Theoretical Neuroscience Hugo de Garis Hugo de Garis (born 1947, Sydney, Australia) was a researcher in the sub-field of artificial intelligence (AI) known as evolvable hardware. He became known in the 1990s for his research on the use of genetic algorithms to evolve neural networks using three-dimensional cellular automata inside field programmable gate arrays. He claimed that this approach would enable the creation of what he terms "artificial brains" which would quickly surpass human levels of intelligence.[1] He has more recently been noted for his belief that a major war between the supporters and opponents of intelligent machines, resulting in billions of deaths, is almost inevitable before the end of the 21st century.[2]:234 He suggests AIs may simply eliminate the human race, and humans would be powerless to stop them because of technological singularity. De Garis originally studied theoretical physics, but he abandoned this field in favour of artificial intelligence. Evolvable hardware[edit] Current research[edit]

Applications of artificial intelligence Artificial intelligence has been used in a wide range of fields including medical diagnosis, stock trading, robot control, law, remote sensing, scientific discovery and toys. However, many AI applications are not perceived as AI: "A lot of cutting edge AI has filtered into general applications, often without being called AI because once something becomes useful enough and common enough it's not labeled AI anymore," Nick Bostrom reports.[1] "Many thousands of AI applications are deeply embedded in the infrastructure of every industry." In the late 90s and early 21st century, AI technology became widely used as elements of larger systems, but the field is rarely credited for these successes. Computer science[edit] AI researchers have created many tools to solve the most difficult problems in computer science. Finance[edit] Banks use artificial intelligence systems to organize operations, invest in stocks, and manage properties. Hospitals and medicine[edit] Heavy industry[edit] Music[edit]

Autonomic Computing The system makes decisions on its own, using high-level policies; it will constantly check and optimize its status and automatically adapt itself to changing conditions. An autonomic computing framework is composed of autonomic components (AC) interacting with each other. An AC can be modeled in terms of two main control loops (local and global) with sensors (for self-monitoring), effectors (for self-adjustment), knowledge and planner/adapter for exploiting policies based on self- and environment awareness. Driven by such vision, a variety of architectural frameworks based on “self-regulating” autonomic components has been recently proposed. Autonomy-oriented computation is a paradigm proposed by Jiming Liu in 2001 that uses artificial systems imitating social animals' collective behaviours to solve difficult computational problems. Problem of growing complexity[edit] Self-management means different things in different fields. Autonomic systems[edit] Control loops[edit] Automatic Adaptive

Kwabena Boahen argues that the miniaturisation of transistors leads to them becomming more like synapses and less like electrical components: sometimes they don't output a current when they should and sometimes they leak a current when they shouldn't. Chipdesign neeeds a paradigm shift: not accurate central processesing the bottleneck but more connections with fuzy results. Compare this to TED talks about the brain by Henry Markram and others. by kaspervandenberg Dec 22