Are animals as smart, or as dumb, as we think they are? Does my dog only think of eating, sleeping and chasing squirrels? 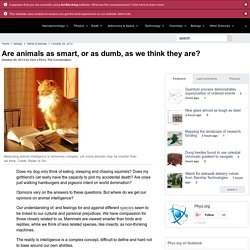 Does my girlfriend's cat really have the capacity to plot my accidental death? Are cows just walking hamburgers and pigeons intent on world domination? Opinions vary on the answers to these questions. But where do we get our opinions on animal intelligence? Our understanding of, and feelings for and against different species seem to be linked to our cultural and personal prejudices. Animal Intelligence Under-rated By Humans, Researchers Say. Dec 05, 2013 06:09 AM EST For many millennia, we humans have considered ourselves superior, primarily due to our large brains and our ability to reason. 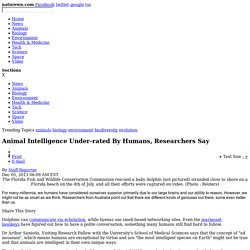 However, we might not be as smart as we think. What Animals Teach Us About Measuring Intelligence. My dog Maebe gets very excited whenever my roommate comes home. 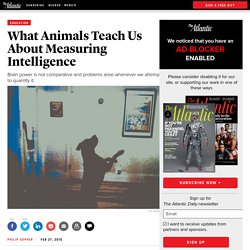 Due to her heightened sense of smell, she starts her happy dance 30 seconds before the door actually opens, giving me time to sneak the bag of chips that he bought back into the cupboard. Does such olfactory aptitude mean she’s a genius, on par with master sommeliers? Animal Minds. Photograph by Vincent J. 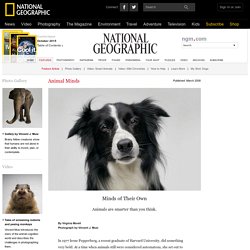 Musi In 1977 Irene Pepperberg, a recent graduate of Harvard University, did something very bold. At a time when animals still were considered automatons, she set out to find what was on another creature’s mind by talking to it. She brought a one-year-old African gray parrot she named Alex into her lab to teach him to reproduce the sounds of the English language. “I thought if he learned to communicate, I could ask him questions about how he sees the world.”

Animal Intelligence. “It seems to me that every time we humans announce that here is the thing that makes us unique—our featherless bipedality, our tool-using, our language—some other species comes along to snatch it away. 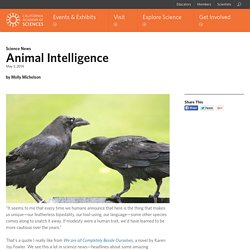 If modesty were a human trait, we’d have learned to be more cautious over the years.” That’s a quote I really like from We are all Completely Beside Ourselves, a novel by Karen Joy Fowler. This is How You Study The Evolution of Animal Intelligence. There are many scientists who study the mental abilities of animals. 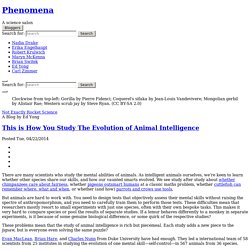 As intelligent animals ourselves, we’re keen to learn whether other species share our skills, and how our vaunted smarts evolved. We see study after study about whether chimpanzees care about fairness, whether pigeons outsmart humans at a classic maths problem, whether cuttlefish can remember where, what and when, or whether (and how) parrots and crows use tools, A New Frontier in Animal Intelligence. Santino was a misanthrope with a habit of pelting tourists with rocks. 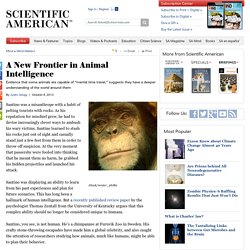 As his reputation for mischief grew, he had to devise increasingly clever ways to ambush his wary victims. Santino learned to stash his rocks just out of sight and casually stand just a few feet from them in order to throw off suspicion. At the very moment that passersby were fooled into thinking that he meant them no harm, he grabbed his hidden projectiles and launched his attack. Santino was displaying an ability to learn from his past experiences and plan for future scenarios.