Watch Sir David Attenborough's full COP26 speech. Food Waste and Climate Change: How Your Leftovers Can Save the World. Why Big Oil loves to talk about your carbon footprint. How We Fix the Climate. Do we need nuclear power to stop climate change? How We End Consumerism. The truth about capturing CO2 to reverse climate change. Every Country Has Its Own Climate Risks. What’s Yours? President Biden has wasted no time in moving to repudiate his predecessor’s regressive climate policies. 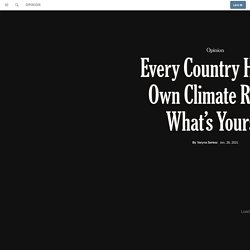 That’s good news. This map shows which areas could be at high risk unless greenhouse-gas emissions are cut drastically. We’ve colored the map to identify the top risks across the globe, using a model by Four Twenty Seven, a company that analyzes climate risks. Accumulated emissions in the atmosphere are causing accelerating risks for a number of climate hazards. Tell us where you live and see how your country compares.

In the United States, for instance, nearly 80 percent of the population, the economy and agriculture will be exposed to at least one high-risk climate hazard. Worldwide, roughly 90 percent of the population will be exposed to one or more threats. From 2000 to 2019, floods upended the lives of at least 1.65 billion people — the highest number in any disaster category. Northern parts of South America will be another densely populated area threatened by extreme heat. Wildfires - If You Don’t Know, Now You Know. Oil And Gas Giants Spend Millions Lobbying To Block Climate Change Policies [Infographic] 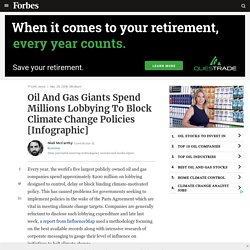 This has caused problems for governments seeking to implement policies in the wake of the Paris Agreement which are vital in meeting climate change targets. Companies are generally reluctant to disclose such lobbying expenditure and late last week, a report from InfluenceMap used a methodology focusing on the best available records along with intensive research of corporate messaging to gauge their level of influence on initiatives to halt climate change. BP has the highest annual expenditure on climate lobbying at $53 million, followed by Shell with $49 million and ExxonMobil with $41 million. 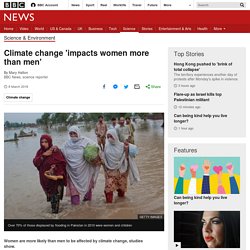 UN figures indicate that 80% of people displaced by climate change are women. Roles as primary caregivers and providers of food and fuel make them more vulnerable when flooding and drought occur. Neoliberalism has conned us into fighting climate change as individuals. Would you advise someone to flap towels in a burning house? 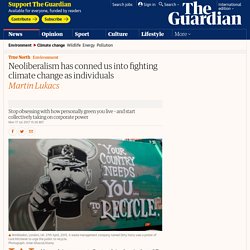 To bring a flyswatter to a gunfight? Yet the counsel we hear on climate change could scarcely be more out of sync with the nature of the crisis. The email in my inbox last week offered thirty suggestions to green my office space: use reusable pens, redecorate with light colours, stop using the elevator. Climate Lab. Forests worldwide threatened by drought. Forests around the world are at risk of death due to widespread drought, University of Stirling researchers have found. 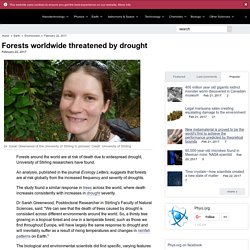 An analysis, published in the journal Ecology Letters, suggests that forests are at risk globally from the increased frequency and severity of droughts. The study found a similar response in trees across the world, where death increases consistently with increases in drought severity. Dr Sarah Greenwood, Postdoctoral Researcher in Stirling's Faculty of Natural Sciences, said: "We can see that the death of trees caused by drought is consistent across different environments around the world. So, a thirsty tree growing in a tropical forest and one in a temperate forest, such as those we find throughout Europe, will have largely the same response to drought and will inevitably suffer as a result of rising temperatures and changes in rainfall patterns on Earth. " InsideClimate News. CAIT Climate Data Explorer. Pope Francis Calls for Action on Climate Change & Capitalism as Planet "Exploited by Human Greed" 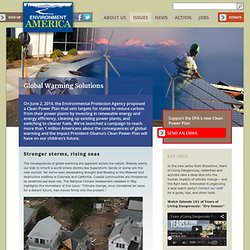 Nobody wants our kids to inherit a world where storms like Superstorm Sandy or worse are the new normal. Yet we’ve seen devastating drought and flooding in the Midwest and destructive wildfires in Colorado and California. Coastal communities are threatened by predicted sea level rise. Naomi Klein: How science is telling us all to revolt.

In December 2012, a pink-haired complex systems researcher named Brad Werner made his way through the throng of 24,000 earth and space scientists at the Fall Meeting of the American Geophysical Union, held annually in San Francisco. 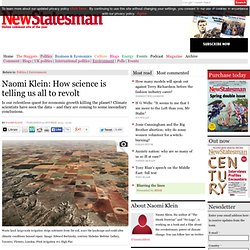 This year’s conference had some big-name participants, from Ed Stone of Nasa’s Voyager project, explaining a new milestone on the path to interstellar space, to the film-maker James Cameron, discussing his adventures in deep-sea submersibles. But it was Werner’s own session that was attracting much of the buzz. It was titled “Is Earth F**ked?” (full title: “Is Earth F**ked? Dynamical Futility of Global Environmental Management and Possibilities for Sustainability via Direct Action Activism”). Wealthy nations pledged billions to help the poor adapt to climate change. Where did it all go?

One of the cruel ironies of climate change is that the poor countries that have contributed the least to the problem are expected to get hit the hardest. 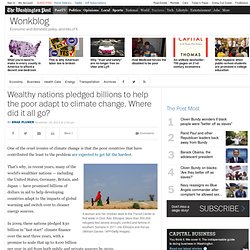 A woman and her children walk to the Transit Center to find water in Dolo Ado, Ethiopia. More than 300,000 refugees fled severe drought, conflict and famine in southern Somalia in 2011 into Ethiopia and Kenya (William Davies / AFP/Getty Images) That's why, in recent years, many of the world's wealthier nations — including the United States, Germany, Britain, and Japan — have promised billions of dollars in aid to help developing countries adapt to the impacts of global warming and switch over to cleaner energy sources. Sense & Sustainability. 'Debate on Science is Over, Time to Act Is Now': World Reacts to IPCC Report. The new report further states that greenhouse gas emissions at or above current rates would induce changes in the oceans, ice caps, glaciers, the biosphere, and other components of the climate system. 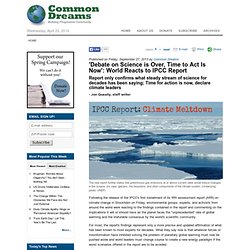 (Underlying photo: UNEP)Following the release of the IPCC's first installment of its fifth assessment report (AR5) on climate change in Stockholm on Friday, environmental groups, experts, and activists from around the world were reacting to the findings contained in the report and commenting on the implications it will or should have as the planet faces the "unprecedented" rate of global warming and the irrefutable consensus by the world's scientific community.

For most, the report's findings represent only a more precise and updated affirmation of what has been known to most experts for decades. Citizens Climate Lobby. Index. Climate Name Change. How farmers can help fight climate change. The other week, I spent some time interviewing several business leaders for the North Carolina Sustainability CEnter, asking them about their reactions to President Obama's climate speach. 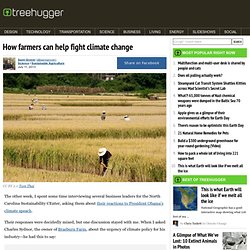 Their responses were decidedly mixed, but one discussion stayed with me. When I asked Charles Sydnor, the owner of Braeburn Farm, about the urgency of climate policy for his industry—he had this to say: "As a farmer, when we look at climate change there are two sides to the story – but we only really talk about one – namely the production of greenhouse gases. Yet agriculture should be part of the solution. I can take you to places right now where crops are grown year-after-year-after-year without tilling the land, and where there is increased carbon sequestration year-after-year. Sydnor has a powerful point. No-till farming NRCS Soil Health/CC BY 2.0 Soil has the potential to store huge amounts of carbon. Producing renewable energy Spearheading conservation jyri/CC BY 2.0. Climate: Securing a cleaner future. Reality Drop: Spread Science about Climate Change, Global Warming.

Plug In America. Transition Network. The Climate Group. The Price of Oil - Oil Change InternationalThe Price of Oil. Carbon Visuals: Home. Connecting scientists, journalists, and communicators. Global Warming / Climate Change. Saul Griffith: Climate Change Recalculated. Good evening. How are we for signal, very good, I am Stewart Brand from the Long Now Foundation. You maybe wonder what this Twitter thing is about. This data, it turns out is helpful helpful for funders of Long Now and of these talks. La Era De La Estupidez - La película (Subtítulos en Español) - Age of Stupid (Spanish subtiltes)

350.org. Climate CoLab. Climate Reality. CLIMATE 101. Are Actually Causing Climate Change? This Graphic Will Tell You. As the world gears up for a crucial climate summit in Paris this December, a few facts about global warming are worth considering. For one thing, not all nations are equal. The top 10 most polluting countries produce almost three-quarters of all the global emissions. For another, energy plays an outsized role in causing climate change. It accounts for roughly 75% of emissions, internationally speaking. When thinking about how to solve the problem, those two facts loom large. You can see this clearly in this interactive graphic from the World Resources Institute—and find other ways to parse the climate issue. Energy plays a big role in all countries, to be sure, but other sectors contribute significantly in some countries.

The United States, which produces the second most emissions, has the highest per capita rate—about eight times India's per head number.