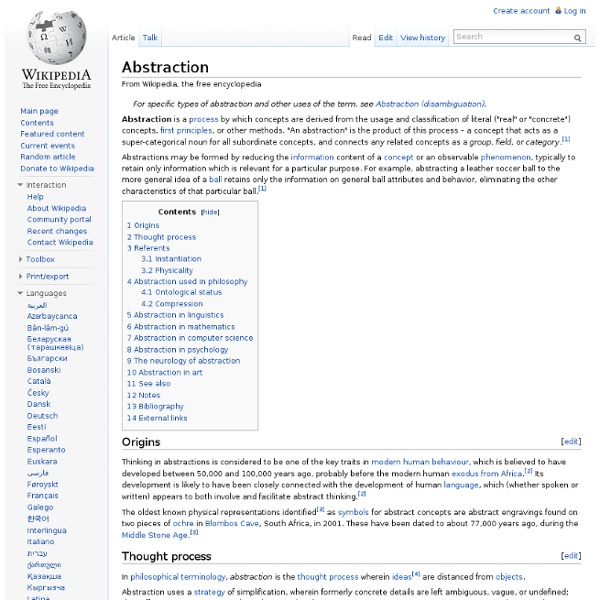 Abstraction is a process by which concepts are derived from the usage and classification of literal ("real" or "concrete") concepts, first principles, or other methods. "An abstraction" is the product of this process—a concept that acts as a super-categorical noun for all subordinate concepts, and connects any related concepts as a group, field, or category.[1] Abstractions may be formed by reducing the information content of a concept or an observable phenomenon, typically to retain only information which is relevant for a particular purpose. For example, abstracting a leather soccer ball to the more general idea of a ball retains only the information on general ball attributes and behavior, eliminating the other characteristics of that particular ball.[1] Origins[edit] Thinking in abstractions is considered[by whom?] Abstraction involves induction of ideas or the synthesis of particular facts into one general theory about something. Thought process[edit] Cat on Mat (picture 1) Related:  The problems with philosophy

Problem solving Problem solving consists of using generic or ad hoc methods, in an orderly manner, for finding solutions to problems. Some of the problem-solving techniques developed and used in artificial intelligence, computer science, engineering, mathematics, medicine, etc. are related to mental problem-solving techniques studied in psychology. Definition[edit] The term problem-solving is used in many disciplines, sometimes with different perspectives, and often with different terminologies. For instance, it is a mental process in psychology and a computerized process in computer science. Psychology[edit] While problem solving accompanies the very beginning of human evolution and especially the history of mathematics,[4] the nature of human problem solving processes and methods has been studied by psychologists over the past hundred years. Clinical psychology[edit] Cognitive sciences[edit] Computer science and algorithmics[edit] Engineering[edit] Cognitive sciences: two schools[edit] Europe[edit]

Formal system Some theorists[which?] use the term formalism as a rough synonym for formal system, but the term is also used to refer to a particular style[which?] of notation, for example, Paul Dirac's bra–ket notation. Background[edit] The system thus consists of valid formulas built up through finite combinations of the primitive symbols—combinations that are formed from the axioms in accordance with the stated rules.[1] More formally, this can be expressed as the following: A finite set of symbols, that can be used for constructing formulas (i.e. finite strings of symbols).A grammar, which tells how well-formed formulas (abbreviated wff) are constructed out of the symbols in the alphabet. Recursive[edit] A formal system is said to be recursive (i.e. effective) or recursively enumerable if the set of axioms and the set of inference rules are decidable sets or semidecidable sets, respectively. Inference and entailment[edit] Formal language[edit] Logical system[edit] Deductive inference[edit] History[edit]

Convergent and divergent production Convergent and divergent production are the two types of human response to a set problem that were identified by J.P. Guilford (1967). Guilford observed that most individuals display a preference for either convergent or divergent thinking. Others observe that most people prefer a convergent closure.[citation needed] As opposed to TRIZ or lateral thinking divergent thinking is not about tools for creativity or thinking, but a way of categorizing what can be observed. Divergent thinking[edit] According to J.P. There is a movement in education that maintains divergent thinking might create more resourceful students. Divergent production is the creative generation of multiple answers to a set problem. Critic of the analytic/dialectic approach[edit] While the observations made in psychology can be used to analyze the thinking of humans, such categories may also lead to oversimplifications and dialectic thinking. References[edit] Guilford, J. (1967). See also[edit]

Symmetry Sphere symmetrical group o representing an octahedral rotational symmetry. The yellow region shows the fundamental domain. Symmetry (from Greek συμμετρία symmetria "agreement in dimensions, due proportion, arrangement")[1] has two meanings. The first is a vague sense of harmonious and beautiful proportion and balance.[2][3] The second is an exact mathematical "patterned self-similarity" that can be demonstrated with the rules of a formal system, such as geometry or physics. Although these two meanings of "symmetry" can sometimes be told apart, they are related, so they are here discussed together.[3] Mathematical symmetry may be observed This article describes these notions of symmetry from four perspectives. The opposite of symmetry is asymmetry. Geometry[edit] A geometric object is typically symmetric only under a subgroup of isometries. Reflectional symmetry[edit] An isosceles triangle with mirror symmetry. A drawing of a butterfly with bilateral symmetry Rotational symmetry[edit] .

Monolith In architecture, the term has considerable overlap with megalith, which is normally used for prehistory, and may be used in the contexts of rock-cut architecture that remains attached to solid rock, as in monolithic church, or for exceptionally large stones such as obelisks, statues, monolithic columns or large architraves, that may have been moved a considerable distance after quarrying. It may also be used of large glacial erratics moved by natural forces. The word derives, via the Latin monolithus, from the Ancient Greek word μονόλιθος (monolithos), from μόνος ("one" or "single") and λίθος ("stone"). Geological monoliths[edit] Large, well-known monoliths include: Africa[edit] Aso Rock, NigeriaBen Amera, MauritaniaBrandberg Mountain, NamibiaSibebe, SwazilandSphinx, EgyptZuma Rock, Nigeria Antarctica[edit] Scullin monolith Asia[edit] Bellary, IndiaMount Kelam, IndonesiaMadhugiri Betta, IndiaSangla Hill, PakistanSavandurga, IndiaSigiriya, Sri LankaYana, India Australia[edit] Europe[edit]

Axiom An axiom or postulate is a statement that is taken to be true, to serve as a premise or starting point for further reasoning and arguments. The word comes from the Greek axíōma (ἀξίωμα) 'that which is thought worthy or fit' or 'that which commends itself as evident.'[1][2] The term has subtle differences in definition when used in the context of different fields of study. As defined in classic philosophy, an axiom is a statement that is so evident or well-established, that it is accepted without controversy or question.[3] As used in modern logic, an axiom is simply a premise or starting point for reasoning.[4] As used in mathematics, the term axiom is used in two related but distinguishable senses: "logical axioms" and "non-logical axioms". In both senses, an axiom is any mathematical statement that serves as a starting point from which other statements are logically derived. Etymology[edit] Ancient geometers maintained some distinction between axioms and postulates. Early Greeks[edit] in