Aboriginal chief, 1901-1907 by Unknown photographer, Kerry & Co. Charles Kerry was a professional photographer and owner of the successful photographic firm Kerry and Co. 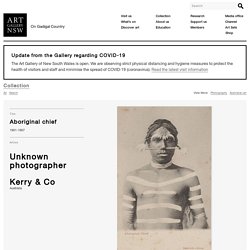 Born in Bombala, New South Wales, Kerry joined the small portrait studio of Alexander Henry Lamartiniere in 1874 and was made a partner in 1883. After Lamartiniere absconded from the business in 1884, taking Kerry’s capital with him, he ran the company in partnership with C D Jones. This eventually became Kerry and Co, the largest firm in the colony. This Woman Said On Facebook She Was Going To "Kill A Lot Of People" Before Axe Attack, Court Hears. Researchers document evidence of folk magic in colonial Australia. □⭕️ AUSTRALIA'S MASSIVE PAEDOPHILE RING... - Exposing Australian Rock Spiders. Boot hidden in Children's Court in Surry Hills a century ago to bring luck.

More than a century ago, when the Children's Court in Surry Hills was under construction, someone hid a lucky charm in the building. 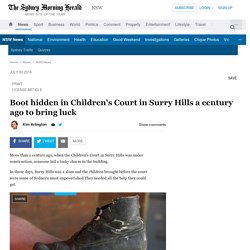 In those days, Surry Hills was a slum and the children brought before the court were some of Sydney's most impoverished.They needed all the help they could get. The anonymous gesture of goodwill only came to light last month, during the NSW government's redevelopment of the Albion Street site. Construction worker Todd Tregent was demolishing internal walls and discovered an old boot in a void behind the fireplace. "I knew it had historical value but we were working ... so I just put it aside," he said. He later gave it to site manager Gary Rossiter, who alerted archaeologist David Marcus. Bruce Pascoe tedx. History of Tegeeack PART 4 - Andy's Knowledge Report #40. Andy Nolch's Channel. Amateur-comedian-charged-over-offensive-graffiti-at-eurydice-dixon-s-memorial-20180704-p4zpir. Medical appointment booking app HealthEngine sharing clients' personal information with lawyers. 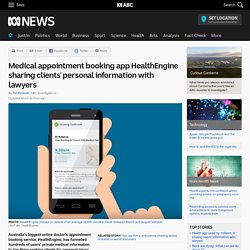 Key points: HealthEngine has boasted to advertisers it can tailor advertising to patients' symptomsThe Australian startup says it only shares information with users' consentBut if a patient wants to use the app, there is no opportunity to opt-out of the fine print about giving information to third parties The Perth-based startup, which is part-owned by Telstra and SevenWest Media and boasts 1.5 million monthly and 15 million annual users, has also been touting access to patients' medical conditions and symptoms for targeted advertising campaigns. Do you know more about this story? The documents reveal HealthEngine passed on details of an average of 200 clients a month to Slater and Gordon between March and August last year. 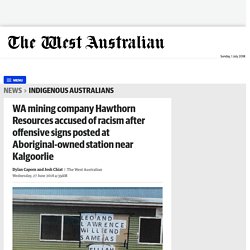 A One Nation MP has levelled accusations of racism against a mining company, after signs were placed around an Aboriginal-owned station north east of Kalgoorlie threatening violence similar to that which killed teenager Elijah Doughty. Speaking under parliamentary privilege on Tuesday night, Upper House MP Robin Scott accused Hawthorn Resources of "racially taunting" owners of Pinjin Station 140km north east of Kalgoorlie. One sign put up outside the station last week says two of the station owners, Leo and Laurence Thomas, will "end up like Elijah", which Mr Scott said was a reference to Elijah Doughty. Others say “we destroy black n….s”. Speaking in Parliament last night, Mr Scott said an ongoing legal battle between Pinjin owners Tisala and Hawthorn Resources had reached “a new level of racist and threatening behaviour”. “I got a note from Mr Leo Thomas and his brother, Laurence. Frank Arkell: How a vicious murder unmasked a city's darkest secrets. 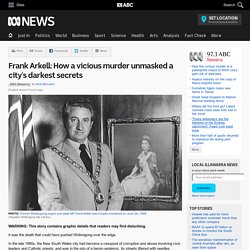 It was the death that could have pushed Wollongong over the edge. In the late 1990s, the New South Wales city had become a cesspool of corruption and abuse involving civic leaders and Catholic priests, and was in the grip of a heroin epidemic, its streets littered with needles. Then, 20 years ago on June 26, 1998, the gruesome bashing murder of former Wollongong lord mayor and state MP Frank Arkell helped break the curse that had dragged the steel city to its darkest depths. Australian Gypsies review: Mandy Sayer's milestone history of forgotten people. HISTORY Australian Gypsies: Their Secret History MANDY SAYER NewSouth, $34.99 Mandy Sayer's Australian Gypsies had its origins in a visit to Budapest, where her husband, Louis Nowra, was writing a screenplay "for a Hungarian gangster". 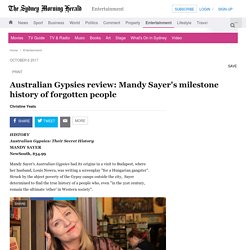 Struck by the abject poverty of the Gypsy camps outside the city, Sayer determined to find the true history of a people who, even "in the 21st century, remain the ultimate 'other' in Western society". Gypsies have been largely ignored in Australia's written history, despite their presence here since 1788. Beaten, abused, humiliated and filmed by Victoria Police. The lead cop offers his explanation: “Definitely don’t shape up to me, mate. Ever,” he says. Some of the six officers appear to be grinning. John groans again in pain: “Have a laugh. Watland Street overpass, Slacks Creek Springwood in Brisbane. No Joke: Capitalism, Australian Identity and The Threat to Unity. Satanic Murders in Wollongong. Wollongong has a rich history, and certainly has had its share of horror. 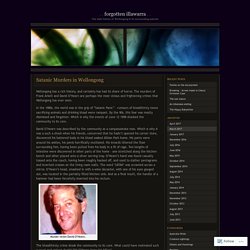 The murders of Frank Arkell and David O’Hearn are perhaps the most vicious and frightening crimes that Wollongong has ever seen. In the 1980s, the world was in the grip of “Satanic Panic” – rumours of bloodthirsty teens sacrificing animals and drinking blood were rampant. By the 90s, this fear was mostly dismissed and forgotten. Which is why the events of June 12 1998 shocked the community to its core. David O’Hearn was described by the community as a compassionate man.