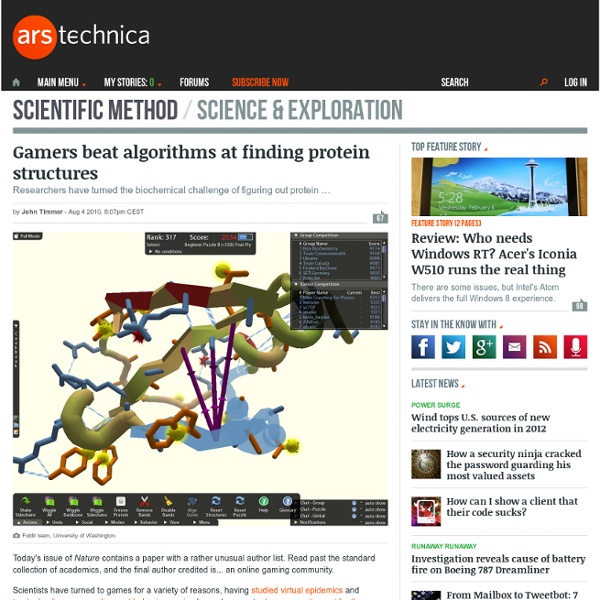 Today's issue of Nature contains a paper with a rather unusual author list. Read past the standard collection of academics, and the final author credited is... an online gaming community. Scientists have turned to games for a variety of reasons, having studied virtual epidemics and tracked online communities and behavior, or simply used games to drum up excitement for the science. But this may be the first time that the gamers played an active role in producing the results, having solved problems in protein structure through the Foldit game. According to a news feature on Foldit, the project arose from an earlier distributed computing effort called Rosetta@home. This is typically an energy minimization problem. It sounds simple, but with anything more than a short chain of amino acids, there are a tremendous number of potential configurations to be sampled in 3D space, which can bring powerful computers to their knees. Starting with algorithms, ending with brains

Massive Open Lab gets volunteers to beat computers in designing RNA Citizen science, the movement to draft non-specialists into areas of scientific research, doesn't require the volunteers to put on lab coats. In at least one case, scientists turned a prickly biochemical problem into a game and found that the gamers could typically beat the best computer algorithms out there. But all that work was done on cases where we already knew the answers, which was how we were able to measure the gamers' success. Now some researchers have taken this approach one step further and created a hybrid project that mixes volunteers with lab-coated workers. 37,000 enthusiasts were given the chance to take on algorithms in designing new RNA molecules. A consortium of researchers at Carnegie Mellon, Stanford, and Seoul National University put together what they called a Massive Open Laboratory. Once the tutorial is done, volunteers can start taking part in challenges like the one shown on top. At least, energetically stable based on calculations.

Toastyfrog.com: Compendium of Useless Information : Games - The Games | The Difficulty of Difficulty Article by Kat? | September 29, 2008 There was a time when difficulty was the name of the game, the thing that made sure that kept gamers plugging quarters into those arcade machines. Naturally, that mentality carried over to the home consoles, and ended up meshing fairly well with the limitations of games at that time. But as Obi-Wan might say, difficulty isn't dead. Just ask Dante. When Devil May Cry 3 hit the States in 2005, the designers had a dilemma on their hands. But that alone wasn't what made DMC3 frustrating. In the end, there were enough players -- and reviewers on deadline -- afflicted with the frustration of being sent back to the beginning of the stage that Capcom took notice and released the much improved Greatest Hits Edition. Then they started playing DOOM 3, and the tears returned anew. Meanwhile, Resident Evil? Wait, what? Oh yeah. But that's not the real challenge. Return to Zork is full of cruel traps like that.

Skynet meets the Swarm: how the Berkeley Overmind won the 2010 StarCraft AI competition We’re gathered in a conference room on the Berkeley campus, the detritus of a LAN party scattered around us. The table is covered with computers and pizza, and there’s a game of StarCraft projected on the screen. Oriol Vinyals, a PhD student in computer science, is commanding the Terran army in a life-or-death battle against the forces of the Zerg Swarm. Oriol is very good—one-time World Cyber Games competitor, number 1 in Spain, top 16 in Europe good. But his situation now is precarious: his goliath walkers are holding off the Zerg’s flying mutalisks, but they can’t be everywhere at once. Then Oriol makes a mistake. Oriol makes a desperate, last-ditch attack on the Zerg base, trying to break through before the mutalisks are reinforced, but it’s too late. There's a palpable air of celebration in the room; even Oriol is grinning. We have a glorious, ego-affirming, reverse-John Henry kind of moment, but no time to savor it. “Okay,” he says. Building a better future through Zerg rushes

Arcen Games, LLC - AI War Features "You are outgunned. You are massively outnumbered. You must win." These are your orders. Humanity has already fought its war against the machines -- and lost. AI death squads stand watch over every planet and every wormhole, the few remaining human settlements are held captive in orbiting bubbles, and the AIs have turned their attention outward, away from the galaxy, to alien threats or opportunities unknown. This inattention is our only hope: a small resistance, too insignificant even to be noticed by the AI central command, has survived. You do have a few things going in your favor. Go forth into the galaxy, steal AI technology, recapture those planets you must in order to achieve your ends, and save what remains of humanity. So What Exactly Is This Game? AI War is a one-of-a-kind strategy game that plays like an RTS but feels like a 4X. More specifically, this is a game that you can either play solo, or in 2-8 player co-op. Why Would I Want This Game? Information For Strategy Newbies

Bitelia Two Generals' Problem Definition[edit] Positions of the armies. Armies A1 and A2 need to communicate but their messengers may be captured by army B. The thought experiment involves considering how they might go about coming to consensus. Yes, we will both attack at the agreed-upon time. Allowing that it is quite simple for the generals to come to an agreement on the time to attack (i.e. one successful message with a successful acknowledgement), the subtlety of the Two Generals' Problem is in the impossibility of designing algorithms for the generals to use to safely agree to the above statement. Illustrating the problem[edit] The first general may start by sending a message "Let us attack at 0900 on August 4." Knowing this, the second general may send a confirmation back to the first: "I received your message and will attack at 0900 on August 4." A solution might seem to be to have the first general send a second confirmation: "I received your confirmation of the planned attack at 0900 on August 4." Proof[edit]

Duels of the Planeswalkers: All about AI i! Patrick Buckland here, CEO and owner of Stainless Games, the developer of Duels of the Planeswalkers. Last Wednesday, I wrote about the engine that drives Duels. This separation has many advantages, some of which I talked about, but the stand-alone nature of the Magic engine is vital in another respect: the AI. Basic Concept The basic approach to the AI for Duels was a simple look-ahead system. The AI needs a method of comparing the results of its comparisons. As it back-tracks from looking into the future, the score of a future world-state influences the scores of the states that came before it. The alternative future path of not sacrificing the Gnomes then also experiments with the your opponent attacking with the 5/5, and you see that you have the option of blocking it with the Gnomes and sacrificing them. Reality Check That's the basic logic. So the following approaches were taken to make this scheme workable: This is particularly important in the combat phase. Strategy Limitations

A (Relatively Easy To Understand) Primer on Elliptic Curve Cryptography Elliptic Curve Cryptography (ECC) is one of the most powerful but least understood types of cryptography in wide use today. At CloudFlare, we make extensive use of ECC to secure everything from our customers' HTTPS connections to how we pass data between our data centers. Fundamentally, we believe it's important to be able to understand the technology behind any security system in order to trust it. To that end, we looked around to find a good, relatively easy-to-understand primer on ECC in order to share with our users. Finding none, we decided to write one ourselves. Be warned: this is a complicated subject and it's not possible to boil down to a pithy blog post. The dawn of public key cryptography Whitfield Diffie and Martin Hellman Modern cryptography is founded on the idea that the key that you use to encrypt your data can be made public while the key that is used to to decrypt your data can be kept private. A toy RSA algorithm Computers don't do well with arbitrarily large numbers.

A new blueprint for artificial general intelligence (stock image) Demis Hassabis, a research fellow at the Gatsby Computational Neuroscience Unit, University College London, is out to create a radical new kind of artficial brain. A former well-known UK videogame designer and programmer, he has produced a number of amazing games, including the legendary Evil Genius — which he denies selling to Microsoft, thus ruining a perfectly good joke. He also won the World Games Championships a record five times. But in 2005, he decided to move from narrow AI (used in his games) to a bigger challenge: creating artificial general intelligence (AGI). Systems-level neuroscience Hassabis will unveil the blueprint on Saturday August 14 at the Singularity Summit in San Francisco. Hassabis: discovering the brain's algorithms Those problems, he said, include: How do we acquire knowledge? “We don’t have any good machine-learning algorithms for going from perceptual information to abstract information, such as what a city is, or how tall or heavy something is.