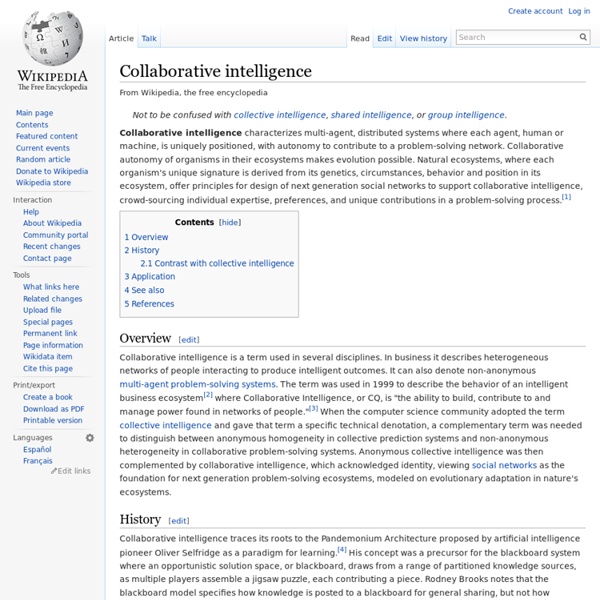 Collaborative intelligence characterizes multi-agent, distributed systems where each agent, human or machine, is uniquely positioned, with autonomy to contribute to a problem-solving network. Collaborative autonomy of organisms in their ecosystems makes evolution possible. Natural ecosystems, where each organism's unique signature is derived from its genetics, circumstances, behavior and position in its ecosystem, offer principles for design of next generation social networks to support collaborative intelligence, crowd-sourcing individual expertise, preferences, and unique contributions in a problem-solving process.[1] Overview[edit] Collaborative intelligence is a term used in several disciplines. History[edit] In the late 1980s, Eshel Ben-Jacob began to study bacterial self-organization, believing that bacteria hold the key to understanding larger biological systems. Contrast with collective intelligence[edit] Application[edit] See also[edit] References[edit]

Open access (publishing) Open access logo, originally designed by Public Library of Science. Whilst no official open access logo exists, organisations are free to select the logo style that best supports their visual language. Other logos are also in use. 9-minute video explaining open access Open access (OA) refers to online research outputs that are free of all restrictions on access (e.g. access tolls) and free of many restrictions on use (e.g. certain copyright and license restrictions).[1] Open access can be applied to all forms of published research output, including peer-reviewed and non peer-reviewed academic journal articles, conference papers, theses,[2] book chapters,[1] and monographs.[3] Definitions[edit] On the occasion of the tenth anniversary of the Budapest Open Access Initiative in 2012, Peter Suber is interviewed about his views on past, present and future developments in open access to scholarly publications The Budapest statement defined open access as follows: Gratis and libre OA[edit]

Internet Archive: Free Download: Libre Culture: Meditations on F Open source governance Open-source governance is a political philosophy which advocates the application of the philosophies of the open source and open content movements to democratic principles in order to enable any interested citizen to add to the creation of policy, as with a wiki document. Legislation is democratically opened to the general citizenry, employing their collective wisdom to benefit the decision-making process and improve democracy.[1] Theories on how to constrain, limit or enable this participation vary however as much as any other political philosophy or ideology. Accordingly there is no one dominant theory of how to go about authoring legislation with this approach. There are a wide array of projects and movements which are working on building open-source governance systems.[2] Applications of the principles[edit] In practice, several applications have evolved and been used by actual democratic institutions in the developed world:[3] Common and simultaneous policy[edit] History[edit]