What happens when you put aluminum in a microwave oven? It arcs, right? We all have aluminum in us now, especially in our brains. So what do you think is happening when the microwave frequencies are going through us? We wonder why we're having trouble thinking and short term memory problems?

I don't think this is the sole cause, but definitely a big one. Wi-Fi Devices Increase Mercury Release From Dental Amalgams – Prepare for Change. Recent research indicates that our increasingly Wi-Fi saturated environment could be greatly amplifying the dangers of mercury exposure from dental amalgams. 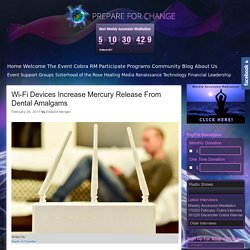 A new study published in the Journal of Neuroimmunology entitled, “Effect of radiofrequency radiation from Wi-Fi devices on mercury release from amalgam restorations,” reveals that our now ubiquitous exposure to Wi-Fi radiation may be amplifying the toxicity of dental amalgams and other forms of mercury exposure to the human body.

Brazilian researchers, in what appears to be the first study of its kind, looked specifically at the potential for Wi-Fi signals to increase the release of mercury from dental amalgams, which are composed of approximately 50% elemental mercury. The highly controlled method researchers used was to recreate amalgam-filled teeth using standard protocols and then storing them in saline solution at 37° C for 14 days. Next, the researchers divided the teeth randomly into 2 groups of 10. The authors conluded: (2013-03c) Elize St Charles - About Electromagnetic Fields. Feeling Strange ? This could Be Why.

NSA Atrocities – Part III – Brain Rape and General Michael Aquino. Electronic Harassment of Innocent Civilians and the Destruction of Humanity. WEAPONIZED CELL TOWER FEATURES LARGE KILL RADIUS. Nasa thefutureof war. Cell Phone Towers are for Mind Control, 1of3. AntennaSearch - Search for Cell Towers, Cell Reception, Hidden Antennas and more. POLICE - POWER DOWN THE TOWERS. CELL TOWERS, SMART PHONES, CHEMTRAILS AND EMF WAVES, WHAT YOU NEED TO KNOW!!! Why Are Weaponized Cell Phone Towers Being Constructed Everywhere? Chances are, you may have seen the first video below in the last day or so on almost any alternative news site, because it's certainly been making the rounds, but one thing I noticed after watching the video, was even after spending a great deal of time looking, not one of the big sites that had the video posted also had anything accompanying the video to either give legitimacy to it, or to debunk it, so I set out to do just that. 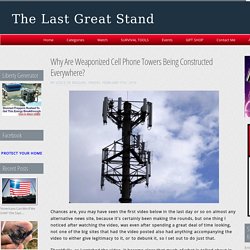 One thing that’s important to note up front: Whether we’re talking about weaponized cell phone towers, Google’s Humanoid Robots That Can Hunt Down Humans Even in Dense Woods, or we’re talking about one of Google’s other Machines Designed to Hunt Humans (both shown below), all were designed with the same outcome in mind, and that’s total control over their “subjects. Since all this technology is intended do one thing, and that's control its "subjects," this post will cover all of it, building up to the weaponized cell phone towers. 1. 2. 3. 4. Next, meet Spot. RF Exposure Health & Safety Guidelines Mobile Phones Cell Towers WiFi. In May 2016 the USA National Institutes of Health's National Toxicology Program (NTP) released partial findings from a $25-million study that tested links between cancer and exposure to mobile phone RF radiation. 48 of 540 exposed male rats developed cancer or a pre-cancerous lesion. 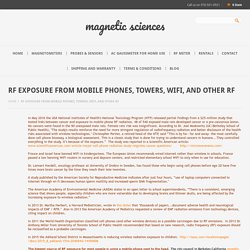 No cancers were found in the 90 unexposed male rats. Female rats' risk was insignificant. According to Dr. Joel Moskowitz (UC/Berkeley School of Public Health), "The study's results reinforce the need for more stringent regulation of radiofrequency radiation and better disclosure of the health risks associated with wireless technologies.

" Christopher Portier, a retired head of the NTP, said “This is by far—far and away—the most carefully done cell phone bioassay, a biological assessment. 5G could require cell towers on every street corner. Would you want a cell phone tower or network base station in your neighborhood? 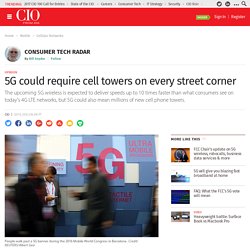 For many people the answer is "no way. " But when 5G — the ultra-fast, next generation of mobile connectivity — arrives it's likely that millions of new cell towers will spring up to handle the traffic, said FCC Chairman Tom Wheeler on Monday. The new 5G wireless is not the only technology that will require more and more cell towers. 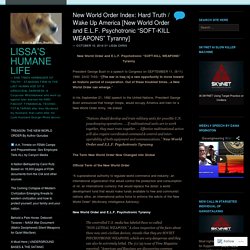 Psychotronic “SOFT-KILL WEAPONS” Tyranny President George Bush in a speech to Congress on SEPTEMBER 11, (9/11) 1990, SAID THIS: “[The war in Iraq is] a rare opportunity to move toward an historic period of cooperation. Out of these troubled times…a New World Order can emerge.” In his September 21, 1992 speech to the United Nations, President George Bush announced that foreign troops, would occupy America and train for a New World Order Army. 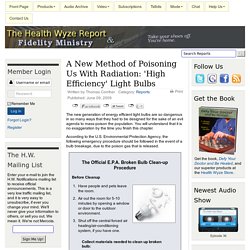 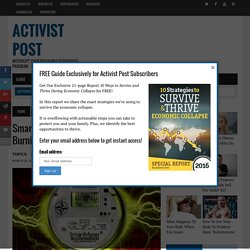 So-called “smart” meters have caused thousands of fires and explosions — such as this fire on Wednesday in Ontario. But corrupt politics and money have swept the whole thing under the rug. Brian explains how and why this is all occurring, including reams of evidence and court documents. Victoria, Australia Smart Meters Health Damages Case Study Published and What to Know to Protect Yourself.

By Catherine J Frompovich Since public utility companies everywhere and states public utility commissions in the USA are behind the times and not up to date with regard to electromagnetic hypersensitivity issues stemming from microwave technologies, perhaps utility customers could email this article to them. 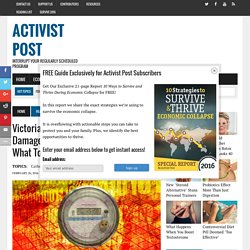 Why? Because it documents what happened to residents in the State of Victoria, Australia, after AMI Smart Meters were put into service in 2006. False Smart Meter Narrative. By Patricia Burke Insightful students of history readily note parallels between the Manhattan-Rochester coalition’s covert research on radiation weaponry in the 1950s, and the smart meter narrative in the U.S. today. 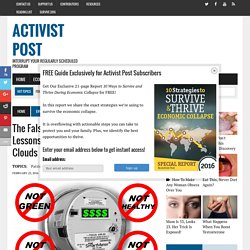 Unethical human experimentation took place on vulnerable populations in Missouri in the decades following WWII. The public narrative was that scientists were researching whether they could shield American cities from Russian warplanes using harmless smokescreen cloud dispersals. In truth, college students were not privy to the true nature of the tests which were to spray low-income predominantly black neighborhoods in St. Louis with radioactive materials, for scientists studying offensive weaponry. In her PhD dissertation in 2011, Lisa Martino-Taylor researched the details of the partnership between the various players who comprised the Manhattan-Rochester Coalition, including While a tight-knit group knew the true nature of the St.

EMF Health Alert Issued by Former Silicon Valley Tech Expert: "Wireless Wake-Up Call" By Kevin Samson Awareness continues to increase surrounding the health dangers of Electromagnetic Fields (EMFs) emanating from our daily gadgets, as well as from the rise of the Smart Grid.

Over the last few years we have witnessed a range of experts declare their concern about the current path we are on. A prominent neuroscientist has gone on record in a lecture to the medical community itself where he exposed the many health risks as well as an industry-wide attempt by telecom to cover up the negative consequences. DEFCON 20: Can You Track Me Now? Government And Corporate Surveillance Of Mobile Geo-Location Data. Environmental Refugees: Electromagnetic Hypersensitivity (EHS) Sufferers. By Catherine J. Frompovich The State of Maine Public Utility Commission recently received what it thinks is the ultimate verdict in the issue of electromagnetic hypersensitivity (EHS) when the Maine Supreme Judicial Court agreed with the PUC that utility companies’ smart meters are safe and not harmful to human health and safety. Perhaps the judge who rendered that decision ought to reconsider what’s going on regarding EHS, especially at the United Nations and their conference where EHS issues were discussed.

Dr Stein’s comprehensive presentation was before the UNESCO 10th World Conference on Bioethics, Medical Ethics and Health Law held January 6 to 8, 2015 in Jerusalem, Israel. [1] One very prominent classification regarding EHS, pointed out by Dr Stein, is that in Sweden, electromagnetic hypersensitivity (EHS) officially is recognized as a functional impairment and not regarded as a disease!

Why Would You Willingly Put Hal9000 in Your Home? By Melissa Dykes Why exactly is it that everyone seems not just okay, but downright gleeful at the thought of computers controlling virtually every aspect of our lives? Why are we running around paying to spy on ourselves? After decades of being warned about the dangers of this exact situation in books and movies, people are willingly lining up to buy into their own Orwellian technological enslavement without any real justification other than what, trendiness?

The potential few dollars that might be saved here won’t be worth anything once the disaggregation algorithms and big data-based peak pricing models are in full swing… Check out the creepy ad for a similar smart talking thermostat here. The first thought that popped into our heads when we saw this was the thermometer responding in the voice of Hal from Kubrick’s 2001: A Space Odyssey I’m sorry, Dave. The Cooking of Humanity. Brain health in children threatened by cell phone radiation. (NaturalHealth365) A recently published study shows that a child’s brain can absorb twice as much cell phone radiation as that of an adult.

It confirms that cell phone radiation is absorbed deeper into children’s brains than previous outdated cell phone test methods have suggested. The world now has more than 7 billion cell phones. Given the links between cell phone radiation and a number of serious diseases like brain tumors, cancer and cardiovascular disease, it’s almost unimaginable to think that the cell phone test methods, which are now 19 years old and are supposed to ensure our protection, actually do little or nothing to protect our children. Red Blood Cells and Smart Meters. By Catherine J. Frompovich For those who wonder if there are any health issues or problems from exposure to Smart Meters and the electromagnetic frequencies they emit, here is a short video which shows three samples of blood examined using a Darkfield Microscope.

The video is self-explanatory, as the samples clearly show morphological responses or reactions. That kind of constant exposure with apparent human cellular morphological reactions—as will happen when a Smart Meter is placed on a dwelling—undoubtedly occurs, as EMFs/RFs are emitted 24/7/365. Consequently, it will be only a matter of time, depending upon each individual’s electromagnetic sensitivities threshold, before adverse health consequences materialize. 77% of Two-Year-Olds Now Use Mobile Devices on a Daily Basis. By Joshua Krause There is no doubt that the pace of technological development we’ve seen in recent years has been both amazing, and frightening. It’s certainly made our lives easier, but no one can ignore the fact that these developments are happening faster than the human race can adapt to them. Predictably, this has spawned a widespread fear of technology in our culture. There is NO electricity in batteries. Antony C. Sutton - Psychotronic Weapons and Behavior Modification.

12 Facts About Microwave Ovens That Should Forever Terminate Their Use. The Ground-Wave Emergency Network (GWEN) System By Val Valerian. Why wireless technology is dangerous  (NaturalHealth365) After water, gas, and electricity, wireless has become the fourth utility. Everything is being ‘wified’ to death. Phones, watches, TVs, iPads, DVD players, coffee machines, refrigerators, you name it!

"RF Capture" WiFi Device Can See You Through Walls. Electrical Sensitivity – What’s Going On In Your Body? EMF Mind Control Weapons Being Used On Population - Deborah Tavares - Scary Info. WIFI, A Deadly Serious Health Risk. ‘Smart’ Meter Spying Finally Admitted. What Are the Reasons for Smart Meters When Analog Meters Were Safe? SMART METERS: A triple threat. Cell Tower Problems to Know About. ‘Smart Cities’ are the Next Phase in the 21st Century Surveillance Grid. Gangstalkers Record Brain Frequencies for Torture with Electronic and Acoustic Weapons. Now We’re Even Going to Have a ''Smart'' Oven, Complete with Image Recognition Camera.