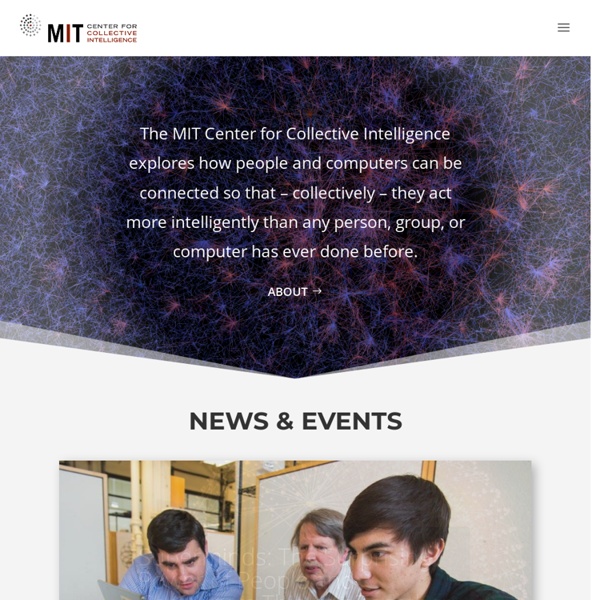 While people have talked about collective intelligence for decades, new communication technologies—especially the Internet—now allow huge numbers of people all over the planet to work together in new ways. The successes of systems like Google and Wikipedia suggest that the time is now ripe for many more such systems, and the goal of the MIT Center for Collective Intelligence is to understand how to take advantage of these possibilities. Our basic research question is: How can people and computers be connected so that—collectively—they act more intelligently than any person, group, or computer has ever done before? The MIT Center for Collective Intelligence brings together faculty from across MIT to conduct research on how people and computers can work together more intelligently and on the underlying scientific questions that help make this possible.

Forget IQ, Collective Intelligence is the New Measure of Smart (video We may focus on the stories of individual genius, but it will be harnessing the intelligence of the collective that enables humanity to solve its future problems. Do you know your IQ, that little number that’s supposed to measure how smart you are? Forget it. Individual intelligence is old news, collective intelligence (CI) is the future. And it’s already here. Google lets you access the collective records of the world via internet searches.

2015 Gates Annual Letter There is overwhelming evidence that people care about others who are suffering—when they can see the suffering. Just think of the global outpouring of support whenever a devastating tsunami or earthquake makes the news. The problem is that ongoing tragedies like deadly diseases and poverty don’t make the news. They’re invisible to many of us. And so the caring of millions of people goes untapped. Lewis Mumford Lewis Mumford, KBE (October 19, 1895 – January 26, 1990) was an American historian, sociologist, philosopher of technology, and literary critic. Particularly noted for his study of cities and urban architecture, he had a broad career as a writer. Mumford was influenced by the work of Scottish theorist Sir Patrick Geddes and worked closely with his associate the British sociologist Victor Branford. Life[edit] Mumford was born in Flushing, Queens, New York, and graduated from Stuyvesant High School in 1912.[2] He studied at the City College of New York and The New School for Social Research, but became ill with tuberculosis and never finished his degree. In 1918 he joined the navy to serve in World War I and was assigned as a radio electrician.[1][3] He was discharged in 1919 and became associate editor of The Dial, an influential modernist literary journal.

The Holistic Spectrum for Impact Investing – Laura Ortiz Montemayor This summer marks the 10th anniversary of the term “Impact Investment”. The Impact Investing sector has evolved in size, depth, data, in terminology, and has examples of impact investments all over the world in several asset classes. But fundamental debates are still on-going regarding the impact metrics & management, common values, definitions and more importantly if we are winning battles but losing the war.

Staying in Touch Searching for life beyond our teeming planet has led to some innovative collaborative approaches to generating knowledge right here at home. PHONE HOME: E.T. tried to call home using this "phone."MATTINGLY23/WIKIPEDIA.ORG Earthlings have wondered for a long time whether life-forms as smart as we are—or smarter—are out there. Our species finds the idea of intelligent extraterrestrial life so fascinating that it has become a staple of literature, music, and film. Think H.G.

Everyday Rebellion “Everyday Rebellion” -Cinema Release in Germany, Switzerland, Liechtenstein, Italy and Malta: 11th September 2014! Information and links for the german cinema release/ Infos und Links zum deutschen Kinostart: Kontakt Verleih Deutschland:www.everydayrebellion.wfilm.de Cinema Dates: www.kinotermine.everydayrebellion.wfilm.de Technics and Civilization Technics and Civilization is a 1934 book by American philosopher and historian of technology Lewis Mumford. The book presents the history of technology and its role in shaping and being shaped by civilizations. According to Mumford, modern technology has its roots in the Middle Ages rather than in the Industrial Revolution. It is the moral, economic, and political choices we make, not the machines we use, Mumford argues, that have produced a capitalist industrialized machine-oriented economy, whose imperfect fruits serve the majority so imperfectly. Background[edit] Apart from its significance as a monumental work of scholarship in several disciplines, Mumford explicitly positioned the book as a call-to-action for the human race to consider its options in the face of the threats to its survival posed by possible ecological catastrophe or industrialised warfare.