6 Amazingly Intelligent Animals (That Will Creep You Out) 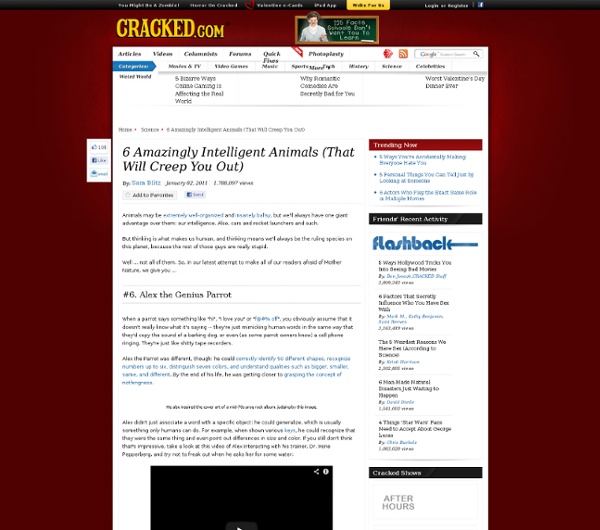 Animals may be extremely well-organized and insanely ballsy, but we'll always have one giant advantage over them: our intelligence. Also, cars and rocket launchers and such. But thinking is what makes us human, and thinking means we'll always be the ruling species on this planet, because the rest of those guys are really stupid. Well ... not all of them. So, in our latest attempt to make all of our readers afraid of Mother Nature, we give you ... Alex the Genius Parrot When a parrot says something like "hi", "I love you" or "f@#% off", you obviously assume that it doesn't really know what it's saying -- they're just mimicking human words in the same way that they'd copy the sound of a barking dog, or even (as some parrot owners know) a cell phone ringing. Alex the Parrot was different, though: he could correctly identify 50 different shapes, recognize numbers up to six, distinguish seven colors, and understand qualities such as bigger, smaller, same, and different. Dr. How?

Bullying Frequently Asked Questions - School Environment Frequently asked questions based on the Bullying at School publication. These Frequently Asked Questions about bullying are extracted from key concepts presented in the California Department of Education's publication titled Bullying at School (PDF). They are easy to adapt and provide information for educators, students, families, and community safety partners who wish to educate themselves and others about effective measures to prevent bullying and respond to it. What is school bullying? What is school bullying? Bullying is exposing a person to abusive actions repeatedly over time.1 Being aware of children's teasing and acknowledging injured feelings are always important. Bullying is a form of violence. An "electronic act" is defined as transmission of a communication, including, but not limited to, a message, text, sound, or image by means of an electronic devise, including but not limited to, a telephone, wireless telephone or other wireless communication device, computer, or pager.

Events We have experienced dozens of brand and product launches. Much of the time, we are not impressed. Small baby-steps, same-old-same-old, reiterations of existing and stale ideas, broken brand promises, confusing off-brand presentations, mind-numbing marketing-speak, boring PR. Blah blah blah. No matter how much we are lavished and pampered with free trips and swag, if we are not impressed, we are not impressed, and we will not write about it. That is the integrity you our readers expect of us, and we expect it of ourselves, too. We’ve attended Mercedes launches before and not written about them. Waiters in black t-shirts with tuxedo print which makes it look like a short sleeve jacket - cool idea We love it that Mercedes is really trying to do something different. Santagold performing The festival runs from April 20 to May 6 and it is free and open to the public. With the release of the A class later this year, Mercedes started to approach the younger, savvy consumer market.

Husband banned from Target Husband banned from Target After I retired, my wife insisted that I accompany her on her trips to Target. Unfortunately, like most men, I found shopping boring and preferred to get in and get out. Equally unfortunate, my wife is like most women - she loves to browse. Yesterday my dear wife received the following letter from our local Target. Dear Mrs. Over the past six months, your husband has caused quite a commotion in our store.. 1. 2. 3. 4. 5. 6. 7. 8. 9. 10. 11. 12. 13. 14. And last, but not least: 15. Hope this made you laugh as it did me. Meet singles at DateHookup.com, we're 100% free! What is Bullying? Aggressive behavior may be bullying depending on what happened, how often it happens and who it happens to. Find out what bullying is and what the different types are. You can also learn more about other topics related to bullying. Bullying Definition Bullying is unwanted, aggressive behavior among school aged children that involves a real or perceived power imbalance. The behavior is repeated, or has the potential to be repeated, over time. The Roles Kids Play There are many roles that kids can play. Related Topics There are many other types of aggressive behavior that don’t fit the definition of bullying.