MIT Creates a Social Network in a T-Shirt — Design News. How Mice Turned Their Private Paradise Into A Terrifying Dystopia. Students Launch Atheist Clubs to Counter Rising Christianity. South Korea has one of the proportionately highest Christian populations in East Asia with just under a third of Koreans identifying themselves as Protestant, Catholic or one of the many other weird and wonderful Christian sub-groups. 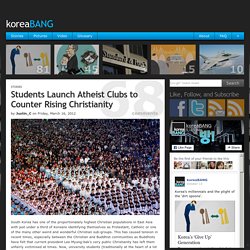 This has caused tension in recent times, especially between the Christian and Buddhist communities as Buddhists have felt that current president Lee Myung-bak’s very public Christianity has left them unfairly victimised at times. Now, university students (traditionally at the heart of a lot of social change and protest in Korea) have started to respond by setting up “Atheist Clubs” at top Korean universities to try and curb some of the ever-growing evangelicalism in the South. From Daum: As religious proselytization increases on university campuses, college atheist clubs are also on the rise. Seoul National University students are also preparing for an atheist club. Meet America's newest allies: Syria's Kurdish minority.

But as much of the rest of Syria ripped itself apart in a vicious civil war, Syria's Kurdish minority spent three years quietly building a series of mini-states in the north of the country. 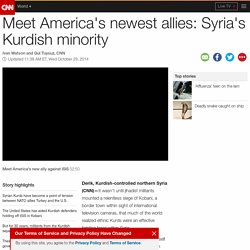 They refer to these three enclaves as Rojava. Until recently, some outside observers saw them as something of a success. "They tried to run them as pretty autonomous statelets that were actually rather admirable in some ways. They included many different ethnic groups, faith groups, and they tried to be inclusive," said Hugh Pope, a senior analyst with the International Crisis Group, a conflict mediation organization. I Was An Atheist In A Foxhole. By Philip K. 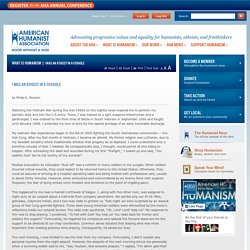 Paulson Watching the Vietnam War during the mid-1960s on the nightly news inspired me to perform my patriotic duty and join the U.S.Army. There, I was trained as a light weapons infantryman and a paratrooper. I was ordered to the front lines of battle in South Vietnam in September 1966 and fought until January 1968. I extended my tour of duty for the special privilege of an early honorable discharge. Ask Richard: My Korean Girlfriend Keeps Asking Me to Come to Church. Thank you for your interest in Patheos newsletters! 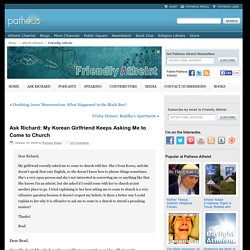 Please enter your email address below and click the "Subscribe" button. Thank you for your subscription. You can visit your Preference Center to complete your profile and see what else we have to offer. We apologize, we were unable to complete your subscription at this time, please try again later. This Grandma And Her Cat Are The Cutest Best Friends Ever. Cats Waiting for Fishermen to Return. Researchers fully 'delete' HIV from human cells for the first time. So far, HIV has eluded a cure because it installs its genome into human DNA so insidiously that it's impossible for our immune system to clear it out. 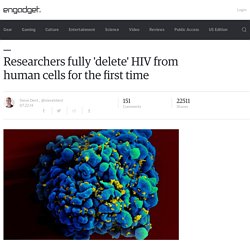 While current treatments are effective, a lifetime of toxic drugs is required to prevent its recurrence. But researchers from Temple University may have figured out a way to permanently excise it using a highly-engineered HIV "editor. " Here's how it works: the team analyzed a part of our immune system that fights infection and built a "guide RNA" strand consisting of 20 nucleotides (RNA building blocks). Those strands were then injected into cells typically infected with HIV, like T-cells. There, they targeted the end parts of the virus's gene and snipped out all 9,709 nucleotides that made up its genome. (Updated) Oregon school district segregates parents by race - National Conservative. *See update below. 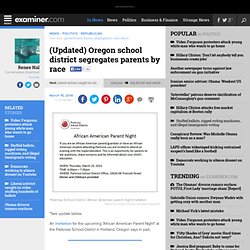 An invitation for the upcoming "African American Parent Night" at the Parkrose School District in Portland, Oregon says in part, "If you are an African American parent/guardian or have an African American student attending Parkrose you are invited to attend an evening with the Superintendent... " A representative from "Covered Oregon" will also be in attendance to give a 45 minute presentation on Obamacare. The school touted additional "Upcoming Culturally Specific Parent Outreach Nights" on a Facebook post, including Hispanic Parent Night, Vietnamese Parent Night, and Slavic Parent Night. Slavic Parent Night? Photos of the day - September 13, 2014. Little Tony Blairs of Kosovo: the boys named after the 'great man' – video. Malala Yousafzai and Kailash Satyarthi win Nobel peace prize 2014. Malala Yousafzai, the Pakistani teenage education campaigner shot on school bus in 2012 by a Taliban gunman, has won the 2014 Nobel peace prize. 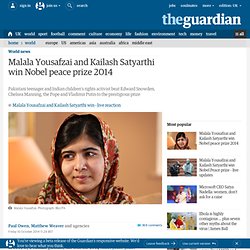 Malala won along with Kailash Satyarthi, an Indian children’s rights activist. The two were named winner of the £690,000 (8m kronor or $1.11m) prize by the chairman of the Nobel committee - Norway’s former prime minister Thorbjoern Jagland - on Friday morning. Malala, now 17, was shot in the head by a Taliban gunman two years ago in Pakistan after coming to prominence for her campaigning for education for girls. She won for what the Nobel committee called her “heroic struggle” for girls’ right to an education. She is the youngest ever winner of the prize. US in Iraq: Men of steal. Ex-Agent Cites 'Progressive Down Slide' In Morale At Secret Service.

A Secret Service agent stands watch near Air Force One in August. 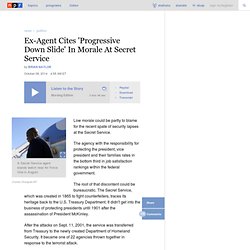 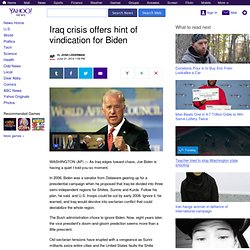 In 2006, Biden was a senator from Delaware gearing up for a presidential campaign when he proposed that Iraq be divided into three semi-independent regions for Shiites, Sunnis and Kurds. Follow his plan, he said, and U.S. troops could be out by early 2008. Ignore it, he warned, and Iraq would devolve into sectarian conflict that could destabilize the whole region. The Bush administration chose to ignore Biden. Now, eight years later, the vice president's doom-and-gloom prediction seems more than a little prescient. Do Stricter Gun Laws Reduce Gun Violence in Latin America? Latin America has some of the highest gun homicide rates in the world, despite certain countries having relatively strict gun control laws, raising the question: to what extent, if any, does tighter legislation help to lower homicide rates and violent crime in the region? 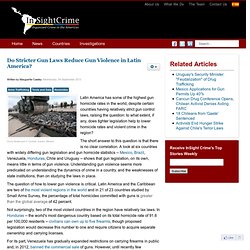 The short answer to this question is that there is no clear correlation. A look at six countries with widely differing gun legislation and gun homicide statistics -- Mexico, Brazil, Venezuela, Honduras, Chile and Uruguay -- shows that gun legislation, on its own, means little in terms of gun violence.

Understanding gun violence seems more predicated on understanding the dynamics of crime in a country, and the weaknesses of state institutions, than on studying the laws in place. The question of how to lower gun violence is critical. Not surprisingly, two of the most violent countries in the region have relatively lax laws. Harvard Graduates Wear Red Tape in Sexual Assault Policy Protest.

Dozens of Harvard University seniors marked their graduation caps with red tape in support of victims of sexual assault and to protest the school’s response to campus attacks. Students put a stripe of crimson tape on the edge of their mortarboards at the school’s 363rd commencement today in Cambridge, Massachusetts. Harvard, the oldest and richest U.S. college, has come under increasing criticism from students saying that programs to prevent sexual assault are inadequate and not enough is being done so that victims can continue their studies.

Traces of another world found on the Moon. 5 June 2014Last updated at 14:00 ET By Pallab Ghosh Science correspondent, BBC News Dr Caroline Smith of the Natural History Museum in London explains the indications of the planet believed to have formed the Moon Researchers have found evidence of the world that crashed into the Earth billions of years ago to form the Moon. Analysis of lunar rock brought back by Apollo astronauts shows traces of the "planet" called Theia. Laugh or Cry: Man practicing open carry robbed at gunpoint - DecodeDC Story. WASHINGTON, D.C. - Should I laugh or should I cry? It’s not just the title of a 1981 song by ABBA – it’s how you sometimes feel when something is either so absurd or so maddening or so something that you’re just not sure how to react.

We here at DecodeDC think politics and the actions of those who play in the political arena are filled with laugh or cry moments. We hope you do, too. In Europe, fewer mass killings due to culture not guns. The USA leads the world in gun ownership, but it's our individualistic culture that puts us at greater risk of mass shootings compared with other countries where guns are prevalent, according to a British criminologist who has studied gun violence in different nations. Mass shooters in any nation tend to be loners with not much social support who strike out at their communities, schools and families, says Peter Squires of the University of Brighton in the United Kingdom, who has studied mass shootings in his own country, the United States and Europe. Many other countries where gun ownership is high, such as Norway, Finland, Switzerland and Israel, however, tend to have more tight-knit societies where a strong social bond supports people through crises, and mass killings are fewer, Squires said.

FULL COVERAGE: Nation mourns victims of Conn. school shooting STORY: Gun stores report brisk business after Conn. massacre. England Calls for More Self-Determination After Scottish Vote. Photograph by Dylan Martinez/Reuters The United Kingdom endures after Scottish voters rejected independence. But the Sept. 18 referendum has unleashed forces that could reshape the 307-year-old union, nudging it toward a more decentralized, American-style democracy. Prime Minister David Cameron has promised greater self-determination to England, the U.K.’s biggest nation, after the independence campaign stoked English resentment over special treatment for the Scots. Scotland has its own parliament, which has powers over the environment, education, and health care—and, starting in 2016, the right to levy income taxes. England has no parliament of its own; laws affecting its citizens are enacted in the House of Commons in Westminster, which includes members from Scotland, Northern Ireland, and Wales.