Pike Committee and White House clashed over CIA secrets. Washington, D.C., June 2, 2017 – The Ford administration came close to igniting a constitutional showdown with Congress more than 40 years ago over demands by a House panel known as the Pike Committee for evidence of possible abuses by the Central Intelligence Agency (CIA). 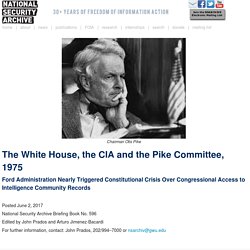 The Time U.S. Spies Thought Al Qaeda Was Ready to Nuke D.C. American intelligence chiefs were so worried in late 2003 of a nuclear terror attack, they asked the British to take over their spying in case something ‘catastrophic’ went down. 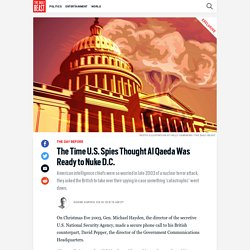 On Christmas Eve 2003, Gen. Michael Hayden, the director of the secretive U.S. National Security Agency, made a secure phone call to his British counterpart, David Pepper, the director of the Government Communications Headquarters. “Happy Christmas, David,” Hayden said, speaking to Pepper from NSA headquarters at Ft. Meade, Maryland, about 20 miles from the Capitol in Washington, D.C.

But Hayden had more on his mind than season’s greetings. “One more thing, David,” Hayden said after the two men exchanged pleasantries. There was a long pause as Pepper absorbed what his American colleague had just told him. CIA: The Corrupt and Ignorant Agency. The American taxpayers have been fleeced for almost seventy years by a so-called «intelligence» agency that has systematically violated the US Constitution, broken practically every federal law on the books, and penetrated virtually every facet of American life. 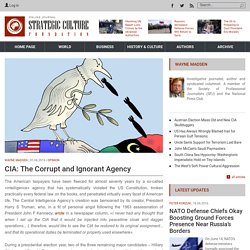 The Central Intelligence Agency’s creation was bemoaned by its creator, President Harry S Truman, who, in a fit of personal angst following the 1963 assassination of President John F Kennedy, wrote in a newspaper column, «I never had any thought that when I set up the CIA that it would be injected into peacetime cloak and dagger operations... I, therefore, would like to see the CIA be restored to its original assignment... and that its operational duties be terminated or properly used elsewhere». During a presidential election year, two of the three remaining major candidates – Hillary Clinton and Donald Trump – have given no indication that they will heed the words of President Truman. Office of Naval Intelligence. The Office of Naval Intelligence (ONI) was established in the United States Navy in 1882. 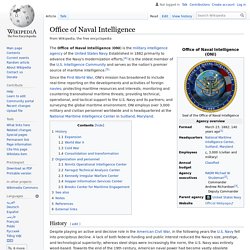 ONI was established to "seek out and report" on the advancements in other nations' navies. Office of Naval Intelligence. Uri Geller psychic spy? The spoon-bender's secret life as a Mossad and CIA agent revealed - Features - Films. Geller was at the Sheffield Doc Fest this week for the premiere of Vikram Jayanti’s The Secret Life Of Uri Geller – Psychic Spy? 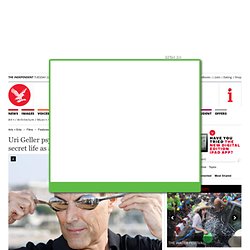 Speaking to The Independent, Geller acknowledged alarm when he first saw Jayanti’s documentary. “I was worried and I am still concerned,” Geller said of the way the documentary outs him as a spy. When he signed up for the doc, the psychic didn’t realise quite how diligently Jayanti would track down his old spy masters. On camera and in interview, Geller still remains coy about his espionage activities. “I tried to execute missions that were positive,” Geller claims. Pentagon bracing for public dissent over climate and energy shocks. Top secret US National Security Agency (NSA) documents disclosed by the Guardian have shocked the world with revelations of a comprehensive US-based surveillance system with direct access to Facebook, Apple, Google, Microsoft and other tech giants. 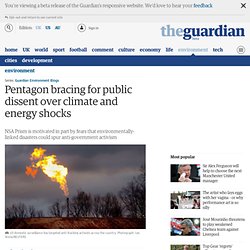 New Zealand court records suggest that data harvested by the NSA's Prism system has been fed into the Five Eyes intelligence alliance whose members also include the UK, Canada, Australia and New Zealand. But why have Western security agencies developed such an unprecedented capacity to spy on their own domestic populations? Since the 2008 economic crash, security agencies have increasingly spied on political activists, especially environmental groups, on behalf of corporate interests. This activity is linked to the last decade of US defence planning, which has been increasingly concerned by the risk of civil unrest at home triggered by catastrophic events linked to climate change, energy shocks or economic crisis - or all three. 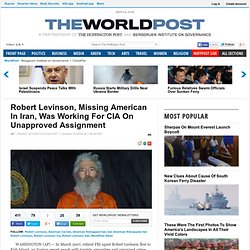 Days later, after an arranged meeting with an admitted killer, he checked out of his hotel, slipped into a taxi and vanished. For years, the U.S. has publicly described him as a private citizen who traveled to the tiny Persian Gulf island on private business. But that was just a cover story. The Revelations of Kidnapped CIA Agent Robert Levinson. By DAVID H. 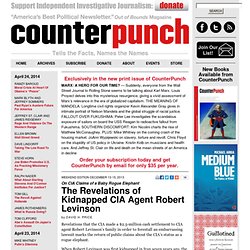 PRICE. The CIA is getting away with keeping every important secret about torture. Lies, Spies and More Lies. By MELVIN A. 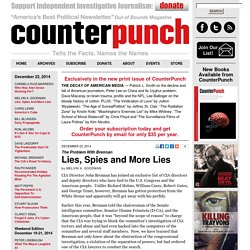 GOODMAN CIA Director John Brennan has joined an exclusive list of CIA directors and deputy directors who have lied to the U.S. Congress and the American people. Untitled.