Medical ID apple at DuckDuckGo. - The Washington Post. Are you a robot? Apple, the iPhone, and the Innovator’s Dilemma. Are you a robot? iPad Pro is as capable as a laptop, and it’s better for my sanity. Last August I switched my entire digital life from an Apple MacBook Pro 15 to a first generation iPad Pro 12.9–and I never looked back. 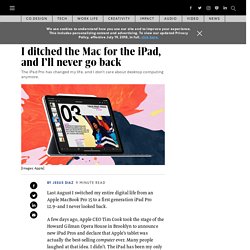 A few days ago, Apple CEO Tim Cook took the stage of the Howard Gilman Opera House in Brooklyn to announce new iPad Pros and declare that Apple’s tablet was actually the best-selling computer ever. Many people laughed at that idea. I didn’t. The iPad has been my only computer for three months now, and I couldn’t be happier. I’m able to do everything I used to do with my MacBook on my 12.9-inch iPad Pro. To be clear, the iPad Pro isn’t perfect. Why a Helium Leak Disabled Every iPhone in a Medical Facility. An IT worker at a medical facility made a remarkable discovery about iPhones and Apple watches earlier this month, after a freshly installed MRI machine appeared to disable every iOS device in the hospital. 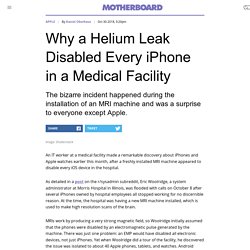 Apple Abandons the Mass Market, as the iPhone Turns Luxury. Bloomberg. Apple Now Runs On 100% Green Energy, And Here’s How It Got There. You have to see Apple’s Reno, Nevada, data center from the inside to truly understand how huge it is. 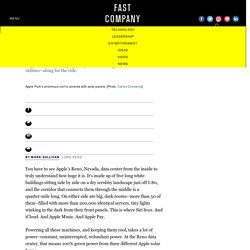 It’s made up of five long white buildings sitting side by side on a dry scrubby landscape just off I-80, and the corridor that connects them through the middle is a quarter-mile long. On either side are big, dark rooms–more than 50 of them–filled with more than 200,000 identical servers, tiny lights winking in the dark from their front panels. This is where Siri lives. And iCloud. And Apple Music. Fieldguide.gizmodo. Apple's artificial intelligence fight is its toughest since the 1980s. As an assistant US Attorney for northern California, Kathryn Haun peered into some of the darkest corners of the cryptocurrency world. 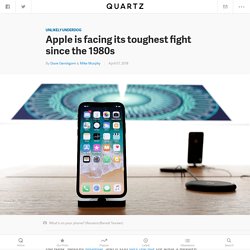 Among her greatest hits were the prosecution of a pair of rogue federal agents who were stealing bitcoin while investigating the illicit marketplace Silk Road in 2015, and settling a criminal investigation into Ripple later that same year. Those were uncertain times for the cryptocurrency world. It was associated with black-market drugs through Silk Road and the meteoric rise—and just as sudden collapse—of the Tokyo-based Mt. Gox exchange. Haun, who goes by Katie, became the point person for all things cryptocurrency in the US government, heading the first cross-agency task force on the industry. Why your iPhone feels slower after each new iOS operating system upgrade (AAPL) Washington, DC is more than the city in which the United States’ federal government does its business. 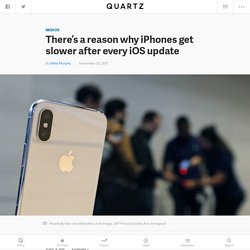 How do i get rid of my recents in ipad. Apple scolded by Europe over in-app purchase protections. Apple hides a Patriot-Act-busting "warrant canary" in its transparency report. Apple’s stripped-down iWork suite is free, but there's a cost. Apple's iWork productivity suite has never been a world beater. Pitted against the near-omnipresent Microsoft Office and Google’s free web-based solutions and only available on Apple products, iWork's market share pales in comparison to its competitors’.

Last week the company made Pages, Keynote, and Numbers free for all existing users, as well as for all new owners of Mac and iOS devices, in a move that was seen by many as an attack on established industry leaders. Banksy’s latest sketch is a terrifying reminder of your iPhone addiction. Banksy, the U.K. street artist who doesn’t shy from making commentary on social and technology issues with his graffiti street art, published a new sketch with a terrifying reminder that your iPhone has basically become a parasitic extension. 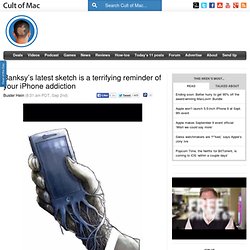 In a separate piece of graffiti art posted on Twitter, Banksy had a subtle message against corporations like Apple, Nike, Coca-Cola, and others. FLIR One gives your iPhone infrared Predator vision. Like most geeks in my generation, my first real glimpse of thermal imaging was provided by John McTiernan’s 1987 film Predator, where Arnold Schwarzenegger and his team of badasses are stalked and killed by an even badassier three-meter-tall alien out on safari. 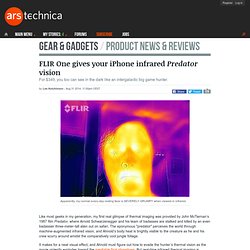 Theverge. Apple Building Massive Structure at Flint Center for iPhone 6 Event. Apple today issued invitations for its upcoming iPhone 6 event on September 9, which is also said to include its much-anticipated wearable device. 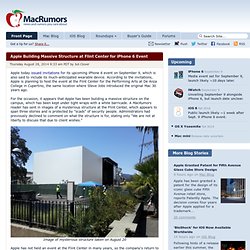 According to the invitations, Apple is planning to host the event at the Flint Center for the Performing Arts at De Anza College in Cupertino, the same location where Steve Jobs introduced the original Mac 30 years ago. Web-enabled smart light bulb coming to Apple stores. Philips has set its sights on disrupting the home automation market, today launching its new "Hue" smart light bulbs, which are to be sold exclusively in Apple Stores worldwide from October 30. 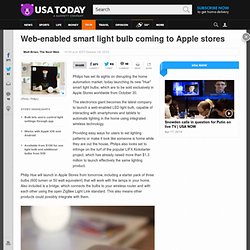 The electronics giant becomes the latest company to launch a web-enabled LED light bulb, capable of interacting with smartphones and tablets to automate lighting in the home using integrated wireless technology. Providing easy ways for users to set lighting patterns or make it look like someone is home while they are out the house, Philips also looks set to infringe on the turf of the popular LIFX Kickstarter project, which has already raised more than $1.3 million to launch effectively the same lighting product. Swipe Those iOS 7 Safari Tabs Away [iOS Tips. The new mobile Safari app built in to iOS 7 has a whole new multi-windowed interface, which allows for a near limitless number of windows that you can open at once. Simply hit the icon in the far right-hand bottom corner to bring up the “tabs” interface, and then tap the big central Plus button to add a new page to the list.

But what about closing those windows? They’ve got an X icon in the upper left of each tab/window, but the X is super tiny, and not always easy to tap. See Timestamps For iMessages In iOS 7 Beta [iOS Tips. In previous versions of iOS, the date and time stamps of iMessages you sent and received were printed right in the app, above the iMessages they pertained to. Not so in iOS 7, with only a date stamp showing up at the top of each segment of messages that come in on a particular day. If you want to know what time those messages came in or were sent, it looked as if you were out of luck. But wait! There’s more! Turns out that you can, in fact, see a time stamp for every message in the Messages app. To see when you sent or received those iMessages, simply launch your Messages app with a tap, and then find the Message thread you want to look at. iWatch Rumors And Reports. Mac Buyer's Guide: Know When to Buy Your Mac, iPod or iPhone.

Why the iPhone 6—not the iWatch—is Apple’s biggest launch this year. While new gadget categories—such as the supposedly forthcoming “iWatch”—could fetch Apple plenty of attention this year, and take some pressure off CEO Tim Cook, the bulk of its growth is more likely to come from a familiar source: The iPhone, which will be 7 years old this weekend. 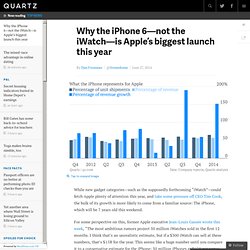 For some perspective on this, former Apple executive Jean-Louis Gassée wrote this week, “The most ambitious rumors project 50 million iWatches sold in the first 12 months. I think that’s an unrealistic estimate, but if a $300 iWatch can sell at these numbers, that’s $15B for the year. This seems like a huge number until you compare it to a conservative estimate for the iPhone: 50 million iPhones at $650 generates $32B per quarter.”

Over the past several years, the iPhone has generated more than half of Apple’s revenue and likely more of its profits. The iPhone also drives a disproportionate amount of Apple’s growth. Apple's Next Hit Will Be a Microsoft Clone. If you were disappointed with Apple's low-key, same-but-better pitch for the new iPad yesterday, take heart: as it did with cell phones, Apple is just buying time until its next big imitative leap. Samsung debuted its first, much maligned and hugely successful Galaxy Note -- the first phone with a bigger-than-5-inch screen -- in September, 2011. For two years afterwards, Apple was content to present incremental improvements to the iPhone. Compared with the iPhone 5, the iPhone 5s just added a fingerprint sensor and an improved camera (plus a few other features that most consumers didn't care about).

Meanwhile Apple carefully observed the "phablet" market, watched other handset makers follow Samsung's example and erode its market share, and experimented with ways to make a big phone easier to navigate one-handed. It struck just when Samsung started posting lower profits, because of the increased competitive pressure. Why iOS updates look small in size but require more than 10x storage capacity. A few weeks back Reddit user “kapits” asked a fairly interesting question regarding iOS 8 updates and the storage required to install them.

Why iOS update is 75MB but requires 1.5GB to install?