How to Uncover and Delete Hidden Files Cluttering Your Mac. How to Retrieve the Wi-Fi Password of a Connected Network on a Mac. ZapfDingbats. iPhone Headphones Tricks. Apple Watch FAQ: Everything You Need to Know. The Apple Watch's time has come. 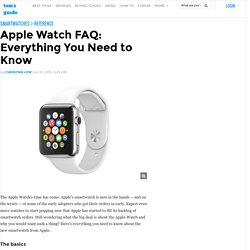 Apple's smartwatch is now in the hands -- and on the wrists -- of some of the early adopters who got their orders in early. Expect even more watches to start popping now that Apple has started to fill its backlog of smartwatch orders. Still wondering what the big deal is about the Apple Watch and why you would want such a thing? Apple Watch: Top 10 Features. Time to get excited. 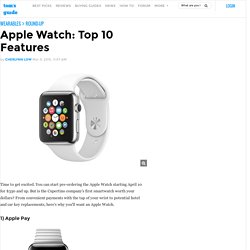 You can start pre-ordering the Apple Watch starting April 10 for $350 and up. Uk.businessinsider. How to Take a Screenshot on a Mac. How to setup and use SMS/MMS relay to send and receive texts on your iPad. SMS/MMS relay is part of Apple's Continuity feature. 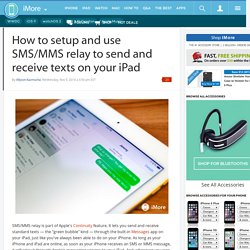 It lets you send and receive standard texts — the "green bubble" kind — through the built-in Messages app on your iPad, just like you've always been able to do on your iPhone. Apple - Safari - Safari Extensions Gallery. Capture a Screen Shot with Mac OS X. Top 10 Projects, Features, and Tips Every Mac User Should Try. Mac Keyboard Shortcuts - common key combinations for Mac OS X and Applications. iStick™: USB Flash Drive with Lightning for iPhone and iPad by HYPER by Sanho Corporation.

Our Kickstarter campaign is over, but you can still get an iStick. 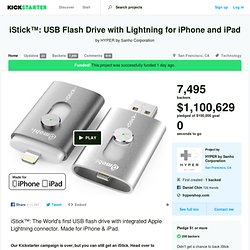 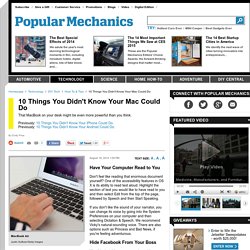 One of the accessibility features in OS X is its ability to read text aloud. Highlight the section of text you would like to have read to you and then select Edit from the top of the page, followed by Speech and then Start Speaking. If you don't like the sound of your narrator, you can change its voice by going into the System Preferences on your computer and then selecting Dictation & Speech. Shortcut icons. For years I’ve collected these keystrokes. 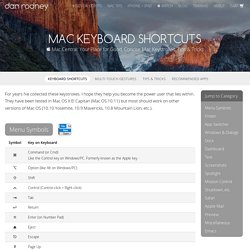 I hope they help you become the power user that lies within. They have been tested in Mac OS X El Capitan (Mac OS 10.11) but most should work on other versions of Mac OS (10.10 Yosemite, 10.9 Mavericks, 10.8 Mountain Lion, etc.). Menu Symbols Finder App Switcher Managing Windows & Dialogs. OS X: Keyboard shortcuts - Apple Support. Using keyboard shortcuts To use a keyboard shortcut, press a modifier key at the same time as a character key. 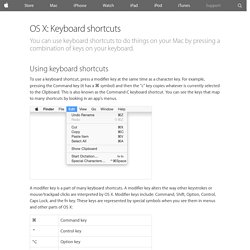 For example, pressing the Command key (it has a ⌘ symbol) and then the "c" key copies whatever is currently selected to the Clipboard. This is also known as the Command-C keyboard shortcut. Useful List of Mac OS X Shortcuts. One of the most important features of an operating system is its capability of helping you get your job done in as less time as possible. 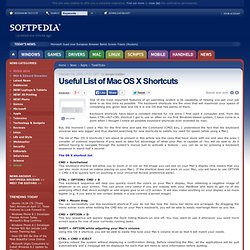 The keyboard shortcuts are the ones that will maximize your speed of completing any given task and OS X is one OS that has plenty of them. Keyboard shortcuts have been a constant interest for me since I first used a computer, and, from the basic CTRL+ALT+DEL shortcut I got to use so often on my first Windows-based system, I have come to a point when I thought I knew all possible keyboard shortcuts ever invented by man. But, the moment I used a Mac for the first time and saw the Command (CMD) key, I understood the fact that the keyboard universe was way bigger and thus started searching for new shortcuts to satisfy my need for speed (while using a Mac). The OS X shortcut list. How to Remove Startup Items in OS X.

Posted 04/19/2012 at 1:57pm | by Cory Bohon Are you tired of applications launching automatically when you start your Mac? 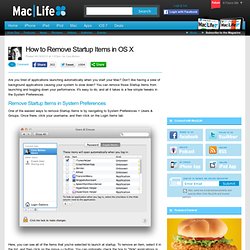 Don’t like having a slew of background applications causing your system to slow down? You can remove those Startup items from launching and bogging down your performance. It's easy to do, and all it takes is a few simple tweaks in the System Preferences. Mac-Os-X-Keyboard-Shortcuts.png (PNG Image, 366 × 228 pixels) Fig_3_14.jpg (JPEG Image, 370 × 330 pixels) MAC_KEYBOARD_SHORTCUTS.pdf. Keynote Tutorial - How To Embed YouTube Videos into Keynote. Make your old dock speakers work with newer devices. It used to be that if you had a set of speakers with Apple's 30-pin dock connector, that system would work with any i-device. 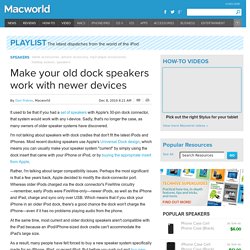 Sadly, that's no longer the case, as many owners of older speaker systems have discovered. I'm not talking about speakers with dock cradles that don't fit the latest iPods and iPhones. Most recent docking speakers use Apple's Universal Dock design, which means you can usually make your speaker system "current" by simply using the dock insert that came with your iPhone or iPod, or by buying the appropriate insert from Apple. Rather, I'm talking about larger compatibility issues. Perhaps the most significant is that a few years back, Apple decided to modify the dock-connector port.

At the same time, most current and older docking speakers aren't compatible with the iPad because an iPod/iPhone-sized dock cradle can't accommodate the iPad's large size. Dock-connector charging converters A few vendors product just such accessories. iPhone 6. CrazyRemote. Mobile. WhatsApp. Restricting Your Apple Gadget to a Single App for Your Child's Safety. Guided Access, which was introduced in iOS 6, is a feature that enables parents, teachers, and also people with disabilities to lock down their device's use to a single app only, and allows them to set which app features are available. The Guided Access feature is helpful to owners who have a child who uses their iPods, iPhones, or iPads either with or without their permission.