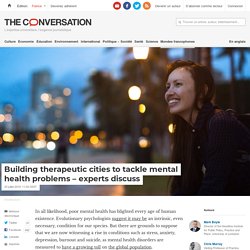 Evolutionary psychologists suggest it may be an intrinsic, even necessary, condition for our species. But there are grounds to suppose that we are now witnessing a rise in conditions such as stress, anxiety, depression, burnout and suicide, as mental health disorders are measured to have a growing toll on the global population. How has technology changed America’s families? What pressures do American families experience in our new data-driven, tech-dependent society? 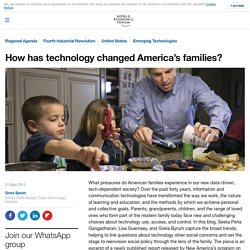 Over the past forty years, information and communication technologies have transformed the way we work, the nature of learning and education, and the methods by which we achieve personal and collective goals. Parents, grandparents, children, and the range of loved ones who form part of the modern family today face new and challenging choices about technology use, access, and control. In this blog, Seeta Peña Gangadharan, Lisa Guernsey, and Greta Byrum capture the broad trends, helping to link questions about technology other social concerns and set the stage to reenvision social policy through the lens of the family.

The piece is an excerpt of a newly published report released by New America’s program on Family-Centered Social Policy. This increasing reliance on digital technologies has created intense pressures and opportunities for families. Women, Men and the Future of Science. Our recent survey with Smithsonian magazine on Americans’ attitudes toward the future of science and technology found some striking differences between women and men in their hopes and fears about the future. 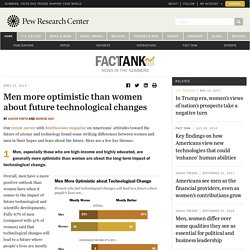 Here are a few key themes: 1Men, especially those who are high-income and highly educated, are generally more optimistic than women are about the long-term impact of technological change. Overall, men have a more positive outlook than women have when it comes to the impact of future technological and scientific developments. Fully 67% of men (compared with 51% of women) said that technological changes will lead to a future where people’s lives are mostly better. Meanwhile, 36% of women (compared with 25% of men) expect those changes to make society worse. These gender differences are especially pronounced among Americans with high levels of income and education. 2Many women are not looking forward to a world of widespread digital “wearables.” Men seen as financial providers in U.S., even as women’s contributions grow. In about a third of married or cohabiting couples in the United States, women bring in half or more of the earnings, a significant increase from the past. 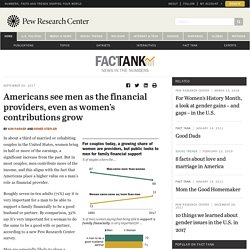 But in most couples, men contribute more of the income, and this aligns with the fact that Americans place a higher value on a man’s role as financial provider. Roughly seven-in-ten adults (71%) say it is very important for a man to be able to support a family financially to be a good husband or partner. Empathy for the Disrupted. I use both taxis and Uber, depending on the situation. 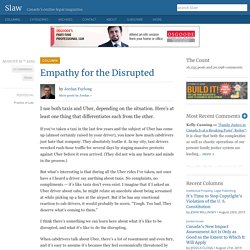 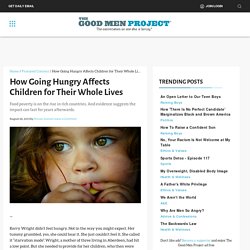 Not in the way you might expect. Her tummy grumbled, yes, she could hear it. She just couldn’t feel it. Future Men - Future Men. Forget smart homes, smart bodies are the most intriguing thing in technology. The smart home market is expected to grow from $76.6 billion in 2018 to over $150 billion by 2024, according to marketsandmarkets. 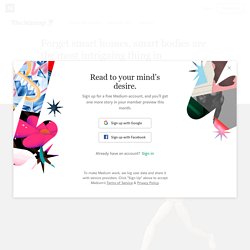 But if you’re not even sure what a smart home is, you aren’t alone. You first need to understand the “internet of things” (aka IoT), which refers to the vast web of everyday objects that have computing devices embedded within them. These devices allow objects to send and receive data all the time. A smart home uses the internet of things to bring extra convenience and security into daily life. FIFA Exploring Option of Replacing Linesmen With Robots. ​FIFA are exploring the possibility of replacing linesmen with robots as part of an investigation into the benefits of technology in football. 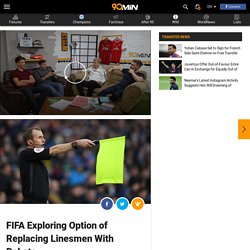 Future of Casinos - The Quintessential Gentleman. Artificial intelligence could reinforce society's gender equality problems. We are not only living in an age where women are being under-represented in many spheres of economic life, but technology could make this even worse. 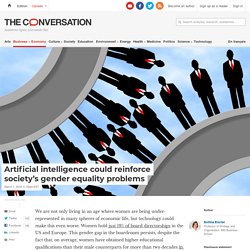 Women hold just 19% of board directorships in the US and Europe. This gender gap in the boardroom persists, despite the fact that, on average, women have obtained higher educational qualifications than their male counterparts for more than two decades in many OECD countries. And the main reason is social bias. Building therapeutic cities to tackle mental health problems – experts discuss. Notes on a Crisis in Beauty - Momus. “I do not mourn for what I have lost. 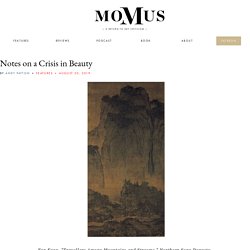 For if there is one new art that we have had to learn, those of us who have been hunted down and forced into exile at a time hostile to all art, then it is the art of saying goodbye to everything.” The growth of the pop-up park - Geographical Magazine. A team of researchers in Australia are urging urban planners to embrace temporary green spaces Had you been taking a stroll around downtown San Francisco in late September 2005 you might have noticed something unusual – an ordinary parking space turned into a tiny park featuring a tree, a patch of grass and a bench.

Rise of the killer sex robots? "Terminator" fans will know the overriding theme for the movie franchise - the machines take over the world under the guise of a new operating system called SkyNet. Many could argue that it's a taste of the future that awaits planet Earth. FIFA Exploring Option of Replacing Linesmen With Robots. Ultimate Software Releases New Report on State of Remote Work. Ultimate Software, a leading global provider of human capital management (HCM) and employee experience solutions in the cloud, today released a new data report on the state of remote work and employee attitudes in the United States. Remote work has reached a tipping point, moving from emerging trend to new workplace reality-an estimated 23% of the U.S. workforce now works remotely at least part of the time. With 40% of its own employee population working virtually, Ultimate explores the changing preferences and perceptions on both sides of the virtual divide in a new report, titled "The Remote Workforce Becomes the Empowered Workforce.

" Ultimate surveyed 1,000 full-time employees in the United State working for companies with a mix of remote and in-office employees, looking at how remote workers and their in-office counterparts prefer to communicate and collaborate, manage their peers, and engage with HR. Signs Remote Workers are Pulling Ahead in Career Growth About Ultimate Software. Headquarter Happenings: Virtuoso Focuses on Human Connections While Promoting Digital Tool. AI-powered technology may be increasingly adept at delivering personalized travel offers to consumers, but it will never, ever match travel advisors’ ability to anticipate and meet their clients’ travel needs, dreams and unrecognized aspirations.

That was the message hotel entrepreneur Chip Conley delivered to advisors at the 31st Virtuoso Travel Week in Las Vegas earlier this month. “You have nuance, you have intuition, you have empathy. A machine does not. Banning Tech is not the solution. For many years, Facebook’s internal slogan was “move fast and break things.” That’s what the company did – along with most other Silicon Valley startups and the venture capitalists who fund them. Their general attitude is one of asking for forgiveness after the fact, rather than for permission in advance. Though this can allow for some bad behavior, it’s probably the right attitude, philosophically speaking.

It’s true that the try-first mindset has frustrated the public. Take the Lime scooter company, for instance. Scooters are not alone. Should some technologies be legally banned? Poll suggests Canadians ready for more health-care technology, virtual care. UN Outreaches Youth with Dialogue on Artificial Intelligence - IDN-InDepthNews. Transformative Technology. The General Store of the U.S.A. Gene J. This 8-Minute Galactic Primer Is the Future of AR Education.

Like humans, crows are more optimistic after making tools to solve a problem. Facial recognition: ten reasons you should be worried about the technology. Facial recognition technology is spreading fast. Why Canada should lead global climate action. How conserving nature's 'umbrella' species could benefit whole habitats. Designing new ways to make use of ocean plastic. 'We die together': Hong Kong protests are being driven by a fearless young generation. As the protests in Hong Kong enter their eleventh straight week, it’s not uncommon to see teenagers dressed in full battle gear. When I was in Hong Kong in mid August, I encountered a group of young people, including some who looked as young as 14, on their way to a late-night protest wearing face masks and protective gear. EI Officer's ruling prevents misconduct allegations unjust dismissal hearing. Iceland is mourning a dead glacier – how grieving over ecological destruction can help us face the climate crisis.

Trust Me, I’m An Expert: Why the Hong Kong protesters feel they have nothing to lose. Futurology: how a group of visionaries looked beyond the possible a century ago and predicted today's world. Wealth and poverty gap: Using tech to uncover the roots of urban inequality. The Future 100: 2019. VR arcades, Spaceport America and more.

Sebastian Kunz, medical director, Lanserhof at The Arts Club. China Vs. Brands. Better design could make mobile devices easier for seniors to use. Design and repair must work together to undo our legacy of waste. Pow! Comics are a way to improve queer men's body image. Interior design of the future will seem like magic. Five 3D printing myths. Theconversation.createsend. How Hong Kong's protests are affecting its economy. How doctors convinced the world the planet was worth fighting for. À l'aide! Les proches aidants sont épuisés et nous en payons tous le prix. Leave the patchwork to the quilts: The case for pharmacare.

The 'slow professor' could bring back creativity to our universities. Thinking Realistically About Disaster Risk - Behavioral Scientist. Consumers Are Becoming Wise to Your Nudge - Behavioral Scientist. How to Save Your Diversity Program From an Untimely Demise - Behavioral Scientist. Who is responsible when an inmate dies by suicide? 'We die together': Hong Kong protests are being driven by a fearless young generation. 'Jihadi Jack' and the folly of revoking citizenship. Transgender hate crimes are on the rise even in Canada. Teaching technological stewardship makes future engineers more agile and responsible. Transgender, transhuman: technological advances offer increased choices but also create new prejudices. Global health still mimics colonial ways: here's how to break the pattern. Still sneezing? Climate change may prolong allergy season. Streets ahead - Charlemagne. Festivals can transform cities by making space for overlooked people and cultures.

Theresa May announces plans to encourage GPs to prescribe social activities for lonely patients. Loneliness-strategy-government-jo-cox-funding-nhs-cooking-dancing-a8583916. Large Majorities Dislike Political Correctness. Why Do People Have Engagement Photo Shoots? For millennials, employment is a public health challenge. Children whose mothers use marijuana may try it at a younger age. Gig jobs pushing staff to ‘sleep deprivation and exhaustion’  Yes, we can. And we can also change the way we talk about disability and sex. Opinion: Bernier and the Regressiveness of "Extreme Multiculturalism" - The Post Millennial.

‘Ghost kitchens’ begin to pop up in Canada as food delivery grows in popularity. Plastic Surgeons Are Worried About a Condition Called "Snapchat Dysmorphia" The climate mitigation gap: education and government recommendations miss the most effective individual actions. No Children Because of Climate Change? Some People Are Considering It. Games boost student nutrition in Nigerian schools. Art and design schools must cultivate creators, not theorists. More of us are opting for 'digital detox' holidays. When is #MeToo coming to my workplace? Eight things you can do now. Success of French football team masks underlying tensions over race and class. WHO classifies compulsive sexual behavior as mental health condition. SA’s society is aging, with attendant mental health issues on the rise, says professor. - The Washington Post.

Vancouver restaurants strapped for servers are simply doing without. Gen Z: Beyond beauty. Gen Z: Beyond beauty. Who Wants a Frictionless Future? – Living in the Machine. Declinism: Why You Think America is in Crisis. Www.forbes. This may be responsible for the high suicide rate among white, American men. What research says about part-time work. Why can’t men make part-time work?