iPhone Tracker application (plus a 32 bit version) If you haven’t heard yet, your iPhone creates a record of all the places you go, and the information is stored in a database on your computer whenever you sync with iTunes. 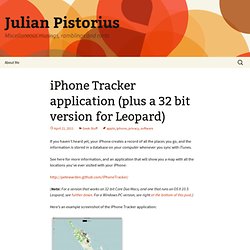 See here for more information, and an application that will show you a map with all the locations you’ve ever visited with your iPhone: (Note: For a version that works on 32-bit Core Duo Macs, and one that runs on OS X 10.5 Leopard, see further down. For a Windows PC version, see right at the bottom of this post.) Here’s an example screenshot of the iPhone Tracker application: Screenshot of the iPhone Tracker app Apple doesn’t seem to be sending this information anywhere, but really, they shouldn’t be storing this much of this kind of information unencrypted in the first place. The first thing you should do is enable encrypted iPhone backups so that other users and applications on your computer can’t access this information.

iPhoneTracker for OS X Leopard (10.5) and 32-bit Processors iPhoneTracker_32bit_leopard.zip. How One App Sees Location Without Asking - Digits. Apple's new iOS 4 operating system for iPhone 3G and above pays close attention to your location, in good and maybe not-so-good ways. 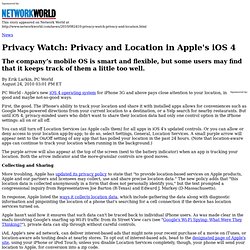 First, the good. The iPhone's ability to track your location and share it with installed apps allows for conveniences such as Google Maps-powered directions from your current location to a destination, or a Yelp search for nearby restaurants. But until iOS 4, privacy-minded users who didn't want to share their location data had only one control option in the iPhone settings: all on or all off. You can still turn off Location Services (as Apple calls them) for all apps in iOS 4's updated controls. Or you can allow or deny access to your location app-by-app; to do so, select Settings, General, Location Services. To continue reading, register here to become an Insider It's FREE to join.

Tube iphone Apps. Researcher warns of risks from rogue iPhone apps. Lax security screening at Apple's App Store and a design flaw are putting iPhone users at risk of downloading malicious applications that could steal data and spy on them, a Swiss researcher warns. 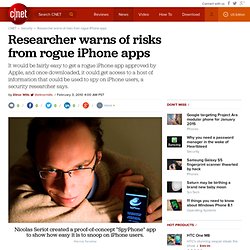 Apple's iPhone app review process is inadequate to stop malicious apps from getting distributed to millions of users, according to Nicolas Seriot, a software engineer and scientific collaborator at the Swiss University of Applied Sciences (HEIG-VD). Once they are downloaded, iPhone apps have unfettered access to a wide range of privacy-invasive information about the user's device, location, activities, interests, and friends, he said in an interview Tuesday. In a talk scheduled for Wednesday at the Black Hat DC security conference, Seriot will explain how an innocent-looking app could be designed to harvest personal data and send it to a remote server without the user knowing it. 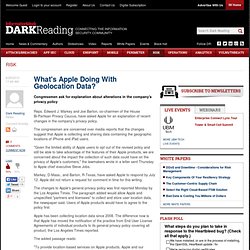 Edward J. Markey and Joe Barton, co-chairmen of the House Bi-Partisan Privacy Caucus, have asked Apple for an explanation of recent changes in the company's privacy policy. The congressmen are concerned over media reports that the changes suggest that Apple is collecting and sharing data containing the geographic locations of iPhone and iPad users. Checkmate iPhone App Uses Background Location for Automatic Checkins on Foursquare. Foursquare players too busy painting the town red to go to the trouble of whipping out their iPhone and checking in can sit back and let Checkmate do the work for them. 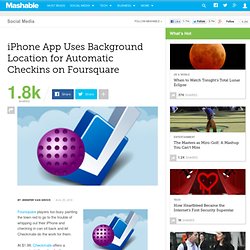 At $1.99, Checkmate offers a convenient alternative for those looking for a passive aggressive way to play the geosocial game. The brand new app harnesses background-running location on the iPhone to check in Foursquare players automatically at specified venues. After you download and fire up the app, you can select different venues to add to your "Auto Checkin Venues" list. You can toggle automatic checkins on or off for the whole list, as well as specify whether to automatically post a shout or share the checkin on Facebook and Twitter. Once you're within 50 meters of a designated venue, Checkmate will take over and check you in on Foursquare. iTunes Features Location Apps with New "On the Grid" Section.

When social networking behemoth Facebook launched its foray into the location game with Places, some declared that apps like Foursquare and Gowalla would be rendered obsolete. 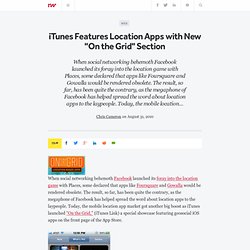 The result, so far, has been quite the contrary, as the megaphone of Facebook has helped spread the word about location apps to the laypeople. Today, the mobile location app market got another big boost as iTunes launched "On the Grid," (iTunes Link) a special showcase featuring geosocial iOS apps on the front page of the App Store. You can find the new section both in the App Store tab within iTunes, or in the "What's Hot" section of the App Store on iOS devices. Disappointingly, however, iTunes is shining the spotlight on just 12 applications, some of which use location as merely an added feature to its main function.

The usual suspects - Foursquare, Gowalla, Brightkite and Loopt - are all present and accounted for, and others like Foodspotting and Yelp are featured as well.