Attribute Segmentation and Communication Effects on Healthy and Sustainable Consumer Diet Intentions. Should Hyping Edible Bugs Focus On The Experience Instead Of The Environment? : The Salt. People were more likely to try mealworms — such as these mealworm chocolate truffles sprinkled with coconut — when the ad focused on taste and experience, a study showed. 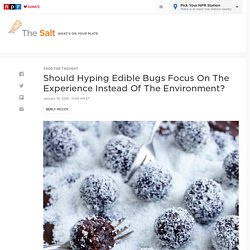 Oliver Brachat/for NPR hide caption toggle caption Oliver Brachat/for NPR People were more likely to try mealworms — such as these mealworm chocolate truffles sprinkled with coconut — when the ad focused on taste and experience, a study showed. Farming insects may be more sustainable than raising meat, but so far that hasn't been quite enough to convince most Westerners to eat them. Marketing them as delicious, exquisite delicacies, though? The global demand for meat drives environmental decline, from forest depletion and soil erosion to increased water use and the release of greenhouse gases. Insect farming is easier on the environment, says Joost Van Itterbeeck, visiting scientist at Rikkyo University in Tokyo and co-author of the book Edible Insects: Future Prospects for Food and Feed Security. What Are The Most Important Pros And Cons Of Eating Insects? Why eating insects won't end world hunger.

Plenty has been said about insects as an alternative source of protein with environmental benefits. 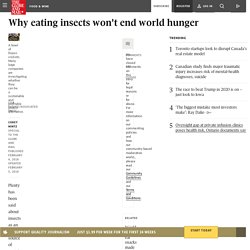 And for good reason. The Food and Agriculture Organization of the United Nations predicts that by 2050 the world population will be 9.1 billion, which they say will require us to increase food production by 70 per cent. And as early as 2013, the FAO started promoting insects as an "unexplored nutrition source that can help address global food insecurity. " So naturally, entrepreneurs have begun lining up to sell insects to Canadians as an environmentally friendly cure-all, from Coast Cricket Protein (whose website claims, "Crickets leave a much lower impact on the planet than other protein sources") in British Columbia, Crickstart ("supersustainable") and Entomo Farms ("the planet's most sustainable super-food") in Ontario, to Midgard Insect Farm ("the next big thing in pet food") in Nova Scotia.

When Utilitarian Claims Backfire: Advertising Content and the Uptake of Insects as Food. Introduction The increasing concern about the impact of our modern lifestyles on the earth's ecosystem has led to immense efforts to address climate change. 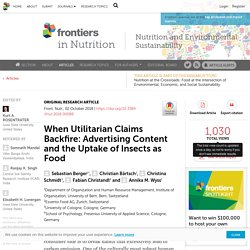 Globally, food production accounts for about a quarter of all anthropogenic greenhouse gas emissions (1), and the upward trend is expected to continue. Research on climate cost of conventional foods emphasizes the problematically high level of conventional meat intake (2). Insect-based consumption has been suggested as a more sustainable (e.g., less carbon dioxide emissions and lower water footprint) and healthy (high in protein, fats, minerals, and vitamins) way of consuming animal protein (3–5), with high economic value (6). In their report, the United Nations (7), systematically compare nutrients and climate costs of various insect species against conventional meat sources and conclude that insects are indeed a viable alternative source of animal protein.

Figure 1. Meat alternatives: life cycle assessment of most known meat substitutes. Why Aren’t We Eating More Insects? From a scientific standpoint, our rejection of bugs as food is illogical. Insects share many characteristics with crustaceans, which are coveted and esteemed; both are members of the phylum Arthropoda. David Foster Wallace, in his 2004 essay “Consider the Lobster,” noted that “lobsters are basically giant sea-insects,” with a footnote citing Maine slang for lobsters: bugs. Library Log in. Library Log in. View of An ecofeminist perspective on new food technologies. Healthy eating trends 6 14 18.

- The Washington Post. The superfoods that don’t have publicists. Meat alternatives: life cycle assessment of most known meat substitutes. Why eating insects won't end world hunger. Journal of Insects as Food and Feed. Crickets Are Not a Free Lunch: Protein Capture from Scalable Organic Side-Streams via High-Density Populations of Acheta domesticus. Abstract It has been suggested that the ecological impact of crickets as a source of dietary protein is less than conventional forms of livestock due to their comparatively efficient feed conversion and ability to consume organic side-streams. 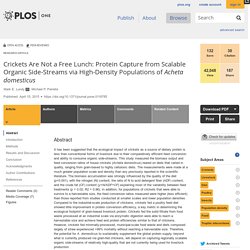 This study measured the biomass output and feed conversion ratios of house crickets (Acheta domesticus) reared on diets that varied in quality, ranging from grain-based to highly cellulosic diets. The measurements were made at a much greater population scale and density than any previously reported in the scientific literature. The biomass accumulation was strongly influenced by the quality of the diet (p<0.001), with the nitrogen (N) content, the ratio of N to acid detergent fiber (ADF) content, and the crude fat (CF) content (y=N/ADF+CF) explaining most of the variability between feed treatments (p = 0.02; R2 = 0.96).

Academic Editor: Gotthard Kunze, IPK, GERMANY Received: August 12, 2014; Accepted: January 8, 2015; Published: April 15, 2015. Why eating insects won't end world hunger. It may not be mainstream yet, but insect protein won’t bug out retailers for long. Sylvain Charlebois is a professor in food distribution and policy and dean of the faculty of management at Dalhousie University Loblaw Cos. 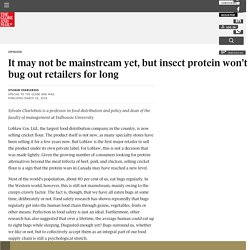 Ltd., the largest food-distribution company in the country, is now selling cricket flour. The product itself is not new, as many specialty stores have been selling it for a few years now. But Loblaw is the first major retailer to sell the product under its own private label. For Loblaw, this is not a decision that was made lightly. Most of the world's population, about 80 per cent of us, eat bugs regularly. Story continues below advertisement The case for using crickets is actually very compelling: A serving of 2.5 tablespoons contains 90 calories and 13 grams of protein. Market-wise, Loblaw is testing consumers' current curiosity and willingness to explore new dietary options. Sign Up. Devenir éleveur d’insectes comestibles pour nourrir la planète. 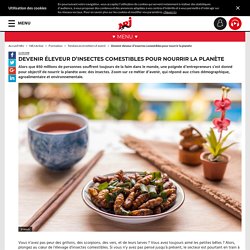