Apple-watch-native-apps-developers-wwdc-2015?utm_content=buffer3cc15&utm_medium=social&utm_source=twitter. Apple Watch apps are going to get a lot more powerful. 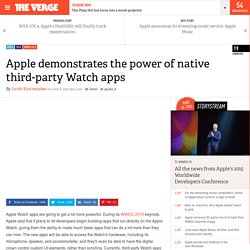 During its WWDC 2015 keynote, Apple said that it plans to let developers begin building apps that run directly on the Apple Watch, giving them the ability to make much faster apps that can do a lot more than they can now. The new apps will be able to access the Watch's hardware, including its microphone, speaker, and accelerometer, and they'll even be able to have the digital crown control custom UI elements, rather than scrolling.

Joshua Engleka on Periscope. iOS Development Weblog. A weekend in Australia with the Apple Watch: Is it worth the hype? When you have an Apple Watch on your wrist you automatically turn into a bit of a tool. 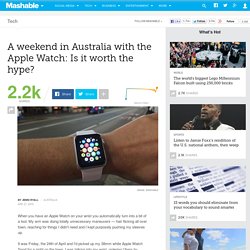 My arm was doing totally unnecessary maneuvers — hair flicking all over town, reaching for things I didn't need and I kept purposely pushing my sleeves up. It was Friday, the 24th of April and I'd picked up my 38mm white Apple Watch Sport for a night on the town. I was talking into my wrist, ordering Ubers by accident and showing off like nobody's business. People oohed and ahhed. The Apple Watch definitely has more mainstream appeal than I predicted, from sideways glances on the bus to people outright touching it in bars. But with all the street cred, does it actually live up to the hype? 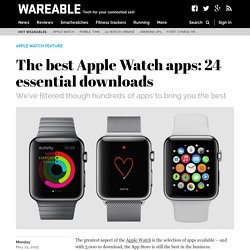 As with all its products, Apple wants to give developers the chance to create personal experiences that will make the Watch an essential accessory. Definitive verdict: Apple Watch review There are already thousands of apps that have an Apple Watch extension – but not all of the 3,000 strong selection are worth your time. So which should you download first? We reckon these would be a good place to start… The Apple Watch is perfect for providing information when you're out and about. Citymapper If you're in one of the supported cities (which include Paris, New York and London), Citymapper is a must.

Free, Download Citymapper Weather Nerd Powered by Dark Sky, Weather Nerd is in our opinion the superior option on Apple Watch. . £2.99/$3.99, Download Weather Nerd. Instagram-open-source-apple-watch?utm_content=buffer2f461&utm_medium=social&utm_source=twitter. Facebook unit Instagram has open sourced a coding library to GitHub that could make it much easier for programmers to develop for Apple Watch. 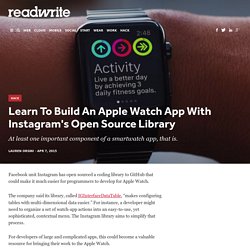 The company said its library, called IGInterfaceDataTable, “makes configuring tables with multi-dimensional data easier.” For instance, a developer might need to organize a set of watch-app actions into an easy-to-use, yet sophisticated, contextual menu. The Instagram library aims to simplify that process. For developers of large and complicated apps, this could become a valuable resource for bringing their work to the Apple Watch. 5 ideas for Apple Watch — Backchannel. Apple-takes-us-guided-tour-through-apple-watch-new-videos?utm_content=buffer24848&utm_medium=social&utm_source=twitter. Apple Rejecting Apps That Use UDID, Don't Support iPhone 5. Apple has finally placed a deadline on its rejection of apps that use UDIDs. 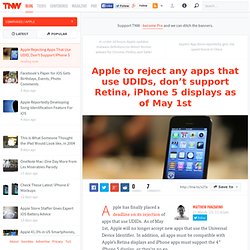 As of May 1st, Apple will no longer accept new apps that use the Universal Device Identifier. In addition, all apps must be compatible with Apple’s Retina displays and iPhone apps must support the 4″ iPhone 5 display, or they’re no go. Here are the notices: Starting May 1, the App Store will no longer accept new apps or app updates that access UDIDs. Please update your apps and servers to associate users with the Vendor or Advertising identifiers introduced in iOS 6Starting May 1, new apps and app updates submitted to the App Store must be built for iOS devices with Retina display and iPhone apps must also support the 4-inch display on iPhone 5 The ban on apps that don’t support the iPhone 5′s display is an interesting one, as there are still many apps out there on the store that are stuck at the old ‘letterboxed’ resolution of the iPhone 4/4S.

Back to the issue of UDIDs, though. Apple iPhone 5 event live coverage: get release date, features info as announced (iPad mini too?) How To Be a Genius: This Is Apple's Secret Employee Training Manual. Leap, What We Learned After Getting Our First 20,000 Users. Inside Apple HQ. Mac OS X 10.8 Mountain Lion preview: Notification Center, iMessage, AirPlay and more. 147inShare Jump To Close It's only been seven months since Apple launched Mac OS 10.7 Lion, but the company isn't sitting still: it just announced the developer preview of OS X 10.8 Mountain Lion, a tweaked and enhanced new version of the operating system that includes major new features like Notification Center, AirPlay mirroring, and iMessage. 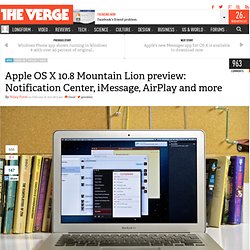