Apple's new 12.9-inch iPad Pro has 4GB of RAM, doubling iPad Air 2. By: Roger Fingas Thursday, September 10, 2015 10:28 AM Apple's new iPad Pro may have 4 gigabytes of RAM, the most ever for an iOS device, Adobe inadvertently revealed in a press release, which has since been edited to remove the claim. 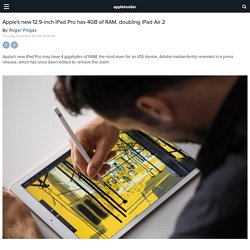 The release previously stated that the Pro is "great for creative workflows with a high res 12.9" touch screen display at 2732 x 2048 pixels, A9X chip, and 4GB RAM," G for Games noted on Thursday. A later check showed however that Adobe edited the sentence to strip out references to both RAM and the A9X. The latter is a major marketing point for the tablet, but Apple typically avoids disclosing how much RAM it uses in mobile devices. Four gigabytes would be the most RAM in any iOS device to date, double the amount in the iPad Air 2. App Store sur Twitter : "Live from San Francisco. Watch the keynote now only on #AppleEvent... Events - Special Event September 2015 - Apple. Verizon to begin testing its super speedy 5G network in 2016. Verizon wants to deliver even faster data speeds. 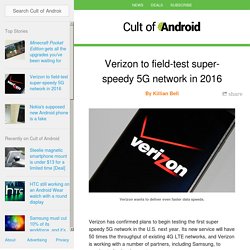 Verizon has confirmed plans to begin testing the first super speedy 5G network in the U.S. next year. Its new service will have 50 times the throughput of existing 4G LTE networks, and Verizon is working with a number of partners, including Samsung, to accelerate its development. “By nearly all accounts, 5G technology should be introduced in the U.S. sometime after 2020, but Verizon is accelerating the expected rate of innovation,” the carrier announced today. “By working closely with key partners, Verizon aims to launch field technology trials next year.” Verizon’s initial plan is to create 5G “sandboxes” at its Waltham, Massachusetts, and San Francisco Innovation Centers that will allow it to trial 5G networks before making them available to the public.

Dominant Apple gets a big bite in the market share pie. Apple's iPhone 6 hashtag leads to job-offers for Dubai Filipina. Dubai-based Filipino expat Debbie Fortes says she is now chasing her dream after a picture that she clicked with her iPhone 6 was selected by Apple for its global ad campaign. 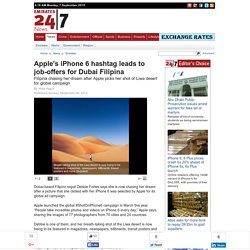 Apple launched the global #ShotOniPhone6 campaign in March this year. “People take incredible photos and videos on iPhone 6 every day,” Apple says, sharing the images of 77 photographers from 70 cities and 24 countries. Debbie is one of them, and her breath-taking shot of the Liwa desert is now being to be featured in magazines, newspapers, billboards, transit posters and more. Comparison: Apple Music vs. Google Play Music All Access. Google debuted its own streaming service in 2013 as Google Play Music All Access, after Google Play music's initial debut in 2011. 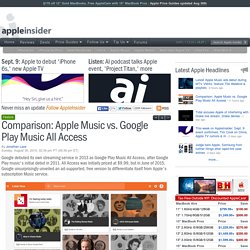 All Access was initially priced at $9.99, but in June of 2015, Google unsurprisingly unveiled an ad-supported, free version to differentiate itself from Apple's subscription Music service. Designed to compete directly with other streaming services such as Spotify, Rdio and newcomer Apple Music, All Access is based on Songza, the human-curated music streaming startup acquired by Google last year. The most striking difference between Google Play Music All Access and Apple Music (apart from the incredibly verbose name) is the user interface, though music curation and discovery services come in at a close second.

Opening up GPMAA, users are first greeted by the day of the week and various playlists arranged around activities like "Waking Up", "Singing in the Shower", and "Getting Out of Bed". These are followed by Recent Activity and Recommended For You. Features. Apple News sur Twitter : "Siri vs. Google Now: Who wins the AI cat fight? #apple"... Emailing yourself? Google Inbox suggests saving reminders instead. Beta Software Program. Calling All App Developers: Six Twitter Accounts You NEED to Follow. Asap. The app development industry can be a tricky business – especially if you don’t have any mentors. 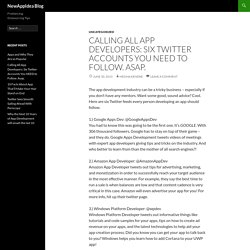 Want some good, sound advice? Cool. Here are six Twitter feeds every person developing an app should follow. 1.) Google Apps Dev: @GoogleAppsDev You had to know this was going to be the first one. 2.) 3.) 4.) Joy Franklin™ sur Twitter : "Apple Maps is getting a really useful feature that Google Maps doesn't have... Apple's iPhone 7 Secret Camera Project Revealed. Apple is making the Watch better by making it even more realtime. By: Sam Oliver Sunday, June 14, 2015 2:21 PM Apple is set to introduce two new features in the second generation of watchOS — internet connectivity independent of the iPhone and push-capable complications — that promise to make the company's first wearable an even better companion. 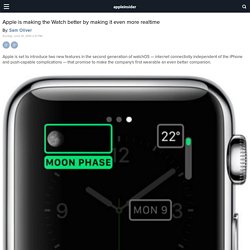 The Apple Watch is a study in contrasts. On one hand, Watch wearers can almost forget that they own an iPhone, especially when roaming around their house and taking calls or sending messages from their wrist. On the other hand, you can't do that without an iPhone. Apple is beginning to cut the umbilical with watchOS 2. Instagram. Transform parts of your screen into Mario levels with Screentendo. World's biggest Apple Store will open in Dubai this summer. Apple acquires high-accuracy GPS technology firm Coherent Navigation. By AppleInsider Staff Sunday, May 17, 2015, 11:01 am PT (02:01 pm ET) In the midst of a major overhaul for its Maps service, Apple seems to have made another under-the-radar acquisition as the company apparently snapped up Coherent Navigation, makers of high-accuracy GPS devices and software. 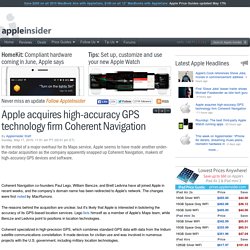 Coherent Navigation co-founders Paul Lego, William Bencze, and Brett Ledvina have all joined Apple in recent weeks, and the company's domain name has been redirected to Apple's network. Virtual reality game asks you to fight blind. Uber and other app-hailing services become legal in the Philippines. One on One: Ken Segall, the Man Who Put the 'i' in iMac. Is Apple Splitting the Baby? One of Apple's Best Ideas Ever. Instagram. The Secret Sauce to App Success. According to an article in the Financial Times this week: “The number of downloads in the UK grew 5 per cent in 2014 but revenues generated rose about 30 per cent as apps become popular as a way to watch, read, listen and play… The rise in app consumption comes alongside data showing the state of the UK app economy is similarly robust. 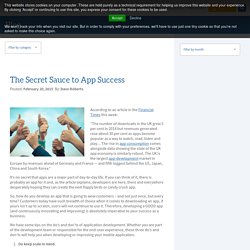 The UK is the largest app-development market in Europe by revenues ahead of Germany and France — and fifth biggest behind the US, Japan, China and South Korea.” It’s no secret that apps are a major part of day-to-day life. If you can think of it, there is probably an app for it and, as the article explains, developers are here, there and everywhere desperately hoping they can create the next flappy birds or candy crush app. So, how do you develop an app that is going to wow customers – and not just once, but every time? Apple IPhone Sales in China Seen Surpassing U.S. for First Time.

Apple Inc.’s IPhone sales in China may have exceeded the U.S. for the first time in the latest quarter, thanks to brisk demand during the country’s New Year celebrations. 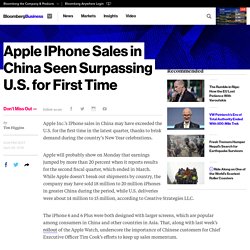 Apple will probably show on Monday that earnings jumped by more than 20 percent when it reports results for the second fiscal quarter, which ended in March. While Apple doesn’t break out shipments by country, the company may have sold 18 million to 20 million iPhones in greater China during the period, while U.S. deliveries were about 14 million to 15 million, according to Creative Strategies LLC. The iPhone 6 and 6 Plus were both designed with larger screens, which are popular among consumers in China and other countries in Asia. That, along with last week’s rollout of the Apple Watch, underscore the importance of Chinese customers for Chief Executive Officer Tim Cook’s efforts to keep up sales momentum. Diagnostics & Usage. Apple seeds first iOS 8.3 beta to developers.