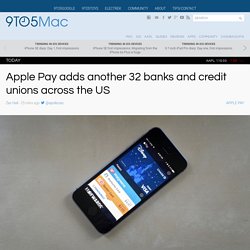 These are the latest additions: Here’s how to setup Apple Pay if your bank is supported (full list): On the iPhone, just head to the Wallet app on iOS 9 and tap the plus (+) icon in the top right corner to begin, then follow the prompts. Cloud Wars - Apple Just Struck a Huge Blow to Amazon. Perhaps Apple was attracted to the Actual Cloud Platform. 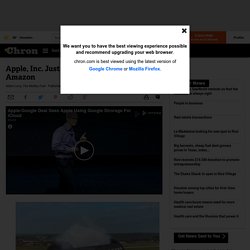 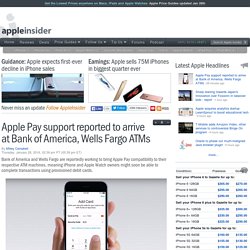 While neither bank confirmed plans to incorporate Apple Pay into upcoming ATM digital wallet solutions, representatives intimated such potential to TechCrunch on Thursday. Wells Fargo ATM lead Jonathan Velline said a team of engineers has been tasked to develop a hardware and software solution that will bridge the gap between mobile device wallets, like products marketed by Apple and Google, and physical cash dispensers. Apple 'to launch peer-to-peer payment app' Image copyright Getty Images Shares in Apple rose 0.3% following reports the tech company will release a payment app allowing users to send each other money over their iPhones. 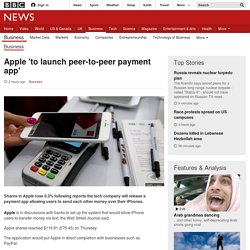 Apple is in discussions with banks to set up the system that would allow iPhone users to transfer money via text, the Wall Street Journal said. Apple shares reached $116.81 (£76.45) on Thursday. The application would put Apple in direct completion with businesses such as PayPal. PayPal shares were down 2.5% on the news. PayPal already has an app called Venmo that allows users in the US to send and request money from each other via their phones. Tim Cook's Apple Has Forced the Whole Tech World to Realign. In Silicon Valley, where wit and irony are far scarcer than venture funding, Aaron Levie is one of the few truly funny guys. 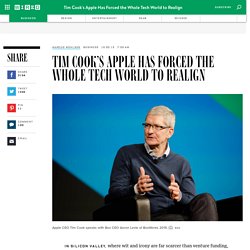 Levie is the CEO of Box, a software company that makes online tools for businesses. That doesn’t sound especially thrilling, as Levie self-deprecatingly acknowledged the other day at Box’s annual conference in San Francisco, where he had just sat down on stage to interview Apple CEO Tim Cook. “You know you’re at an enterprise software conference, right?” Levie asked Cook, whose company is known more for its hypnotic command over consumers than businesses. Tesla's Apple Problem - Tesla Motors (NASDAQ:TSLA) Summary An article in the Wall Street Journal claims Apple is committed to a 2019 target ship date for its electric car. 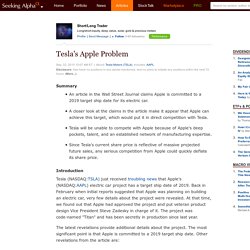 A closer look at the claims in the article make it appear that Apple can achieve this target, which would put it in direct competition with Tesla. Jimmy Kimmel: How To Use Apple Pay. Apple releases Mac app to store photos in iCloud - BBC News. Apple has released a new photo storage app for Macs, which can automatically store full-resolution images online. 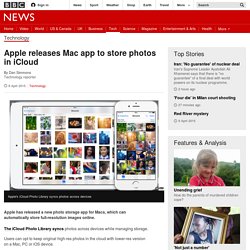 The iCloud Photo Library syncs photos across devices while managing storage. Users can opt to keep original high-res photos in the cloud with lower-res version on a Mac, PC or iOS device. But critics highlight recent online photo security breaches and say Apple's storage fees are much higher than some of its competitors.

The iCloud Photo Library app responds to how much storage is left on each device. Apple Pay is coming to 200,000 vending machines, kiosks, and parking pay stations. Apple Pay will soon be coming to thousands of self-service pay stations across the U.S. as a result of a wireless payment tech provider’s adoption of the technology. 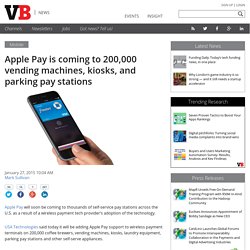 USA Technologies said today it will be adding Apple Pay support to wireless payment terminals on 200,000 coffee brewers, vending machines, kiosks, laundry equipment, parking pay stations and other self-serve appliances. “USA Technologies has always sought to provide convenience, security and an easy way to pay for consumers who are less and less likely to carry cash,” said USA Technologies CEO Stephen Herbert in a statement. “We recognized early on the potential for mobile payment, and promoted the technology to ensure our customers were ready for this shift to occur.” A Day With Apple Pay. GT Advanced Technologies blames Apple agreement for its failure. 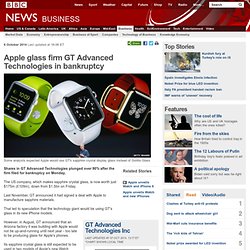 The US company, which makes sapphire crystal glass, is now worth just $175m (£109m), down from $1.5bn on Friday. Apple preparing massive new mobile payments initiative. Apple is expected to launch a huge new mobile payments program next week, partnering with Visa, Mastercard, and American Express. 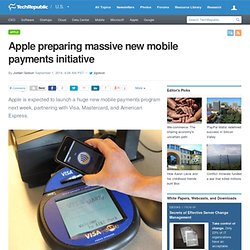 Along with the iPhone 6, Apple will launch an iPhone payments system next week, according to reports from multiple media outlets with rock-solid histories. It is said that major credit card firms Visa, MasterCard, and American Express are all on board with Apple's new service. Back in July, The Information reported that Visa has reached a deal with Apple, and then this past weekend, Re/Code said that American Express was on board, plus Bloomberg piled on, claiming that MasterCard was participating as well.

Getting all three credit card networks on board at launch will go a long way towards getting iPhone owners to sign onto the program. Apple Shows Off Smartwatch, Larger-Screen iPhones. For Apple CEO Tim Cook, iPhone, Smartwatch Launch Is Biggest Test. Why I Won't Buy an Apple Watch. Apple's smartwatch looks better than any other we've seen yet, but I'm not sold. Here's why. Tim Cook took the stage and proudly proclaimed that, for the Apple Watch, "The list of features is a mile long. " That's exactly the problem. The hardware is sophisticated, exquisite, and refined in typical Apple fashion.

Beats sued by Bose over noise-cancelling patents. Apple and IBM form apps and sales partnership. 15 July 2014Last updated at 18:16 ET By Leo Kelion Technology desk editor Apple released a photo of its chief executive Tim Cook and IBM's CEO Ginni Rometty Apple and IBM have announced a business partnership that will see the two firms co-develop business-centric apps for iPhones and iPads. In addition, IBM will start selling business clients Apple's mobile devices pre-installed with the new software. The two firms were one-time rivals, with Apple's 1984 advert depicting itself as an upstart challenging what was a dominant IBM. One expert said it was too soon to know how significant the deal would be. "It's hard to be sure without more details," said Ken Dulaney, an analyst at the tech consultancy Gartner. "Enterprises need special features to protect their applications and the associated data.

Worst Deal Ever: Microsoft's Apple Investment. Whether you’re holding an old-school 4, a tooty-fruity 5c, a Shanghai-edition gold 5s, or a Calle Ocho-jailbreak especial, it’s easy to forget how many stars had to align for any iPhone to happen at all. The particular butterfly flappings that combined to create Steve Jobs’s extraordinary life and career are well-known and oft-recalled; less remembered is the $150 million lifeline Microsoft (MSFT) threw Apple (AAPL) in August 1997, when Apple was within weeks of bankruptcy.

That now-infamous investment gave Apple enough money and breathing room to consolidate control of its Mac business and parlay that momentum and cash flow into the iPod and iTunes. Then the iPhone and iPad that would go on to mortally wound the entire personal computer industry, effectively zero-sum annexing continents’ worth of market capitalization from Microsoft’s waning empire. Microsoft was worth $556 billion at its Y2K peak. Apple's Backwards Business Model Upends Everything We Know. Give away the razor handles, make money on the razor blades. That was received wisdom in business for much of the 20th century: If you hook your customers with a free or very cheap product below cost, you can charge a lot more for the necessary add-ons to that product.

Videogame companies have been doing exactly that for years: sell the consoles for less than what they cost to manufacture, then offer games for $50 a pop. Jobs Right as Apple Customers Prefer 5s to Cheaper IPhone. Apple Inc. (AAPL) co-founder Steve Jobs, who emphasized high-end consumer gadgets over cheaper ones, may have been right all along. Last month, Chief Executive Officer Tim Cook introduced the colorful iPhone 5c, a less-expensive version of Apple’s smartphone, to “serve even more customers” around the world. It turns out people so far are more interested in its pricier, feature-rich cousin, the 5s.

Three surveys in the past two weeks said the company’s new high-end model is outselling the 5c by at least 2 to 1. Apple: Why the iPad Is More Important Than the iPhone. When Apple (AAPL) unveils its latest iPad and iPad mini later this month, the Internet will not explode, as it did when the company launched new iPhones last month. Why businesses are embracing iOS 7. iPhone 5c, 5s launch on Virgin Mobile for $100 less than Apple pricing. Apple Overtakes Coca-Cola as World’s Most Valuable Brand. Apple (AAPL) has unseated Coca-Cola as the world’s No. 1 brand, as the company founded by Steve Jobs is a leader in design and performance, according to a study of the Top 100 brands by Interbrand Corp. Apple iOS 7 makes some users quite literally SICK. As in puking, not upset.