Riots, suicides, and other issues in Foxconn's iPhone factories. ZHENGZHAO, Henan province, China -- If you want to understand why iPhones are made in this corner of the world, look no further than Li Yue. 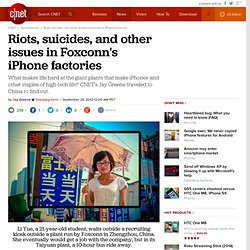 When I met the effervescent 21-year-old, she was lined up at a kiosk outside the gates of the massive assembly plant owned by Foxconn. Li, wearing a white T-shirt and blue jean shorts and carrying a pink parasol to beat the heat on a scorcher of a June day, was among a group of a dozen or so candidates applying for a job with the Taiwanese firm.

Not a specific job, mind you. Any job. It's not as if Li, who just finished her first year as a student at Henan Police College, didn't have much going for her. Foxconn granted her wish. Late Sunday night, the Taiyuan factory, with more than 79,000 workers, was roiled by violence . The weekend violence is the latest in a growing list of incidents that have heightened concerns over conditions in factories that make iPhones and other high-volume tech products. iPad - See The Horrors Inside The Secret Chinese Foxconn iPad Factory. NYT: Why Apple won't make iPhones in the US - Business - US business - The New York Times. Two Schools of Thought: The Key Difference Between Apple and Google. Apple and Google may look similar on the surface, but the companies couldn't be any more different. 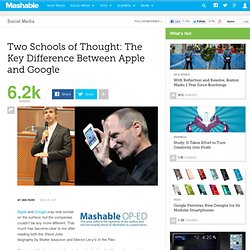 That much has become clear to me after reading both the Steve Jobs biography by Walter Isaacson and Steven Levy's In the Plex. Google and Apple are technology behemoths that bucked the system, created game-changing products and are worth more than $550 billion collectively. Both companies have successful mobile phone divisions and web browsers, and both companies have a common enemy in Microsoft. The two companies are built on completely different foundations, though. Sergey Brin and Larry Page firmly believe in the power of data and numbers, and that reliance on the metrics is the cornerstone of every major decision the company makes.

Steve Jobs, on the other hand, believed in the power of design and often threw out the data. There is no starker contrast of the ying-yang battle of data vs. design. Google: Data Is King Let's start with Google. Apple: Design Is in Its DNA Conclusion.

iPad. Making Me a Mac Believer (Almost) – Learn. Teach. Engage. The world has been taken over by Apple. 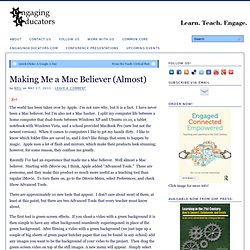 I’m not sure why, but it is a fact. I have never been a Mac believer, but I’m also not a Mac basher. I split my computer life between a home computer that dual-boots between Windows XP and Ubuntu 10.10, a tablet notebook with Windows Vista, and a school provided MacBook Pro (new but not the newest version). When it comes to computers I like to get my hands dirty. I like to know which folder files are saved in, and I don’t like things that seem to happen by magic. Recently I’ve had an experience that made me a Mac believer. There are approximately 10 new tools that appear.

The first tool is green-screen effects. Our students have used this feature to create book recommendations, travel videos, and math tutorials. The second feature is very similar to green-screening, but this works with two videos (it still works with a picture and video as well). There is plenty of help out there if you want to try iMovie’s Advanced Tools. Apple Has Finally Stuck A Dagger Into SMS. I Love It. Now that the WWDC keynote is over and I’ve had a little bit of time to reflect, I’ve been thinking about what excited me the most from today’s announcements. 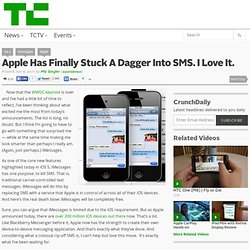 The list is long, no doubt. But I think I’m going to have to go with something that surprised me — while at the same time making me look smarter than perhaps I really am. (Again, just perhaps.) iMessages. As one of the core new features highlighted today in iOS 5, iMessages has one purpose: to kill SMS. That is, traditional carrier-controlled text messages. iMessages will do this by replacing SMS with a service that Apple is in control of across all of their iOS devices. Sure, you can argue that iMessages is limited due to the iOS requirement. Five days ago, on my personal blog, I responded to a post Anil Dash wrote wondering if Apple had all the tools in place to build their own Twitter. 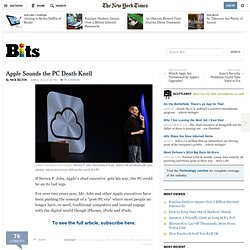 Jobs discussing iCloud, which will automatically sync photos, videos and music without the need of a PC. If Steven P. Jobs, Apple’s chief executive, gets his way, the PC could be on its last legs. For over two years now, Mr. Jobs and other Apple executives have been pushing the concept of a “post-PC era” where most people no longer have, or need, traditional computers and instead engage with the digital world though iPhones, iPods and iPads.

Although the company has been discussing this concept for some time, it has not offered a solution to ditch the PC and go completely mobile.