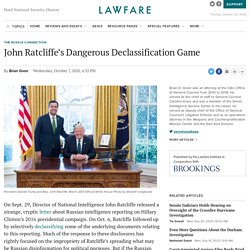 On Oct. 6, Ratcliffe followed up by selectively declassifying some of the underlying documents relating to this reporting. Much of the response to these disclosures has rightly focused on the impropriety of Ratcliffe’s spreading what may be Russian disinformation for political purposes. But if the Russian reporting is not disinformation—and there’s reason to believe it may not be—Ratcliffe’s actions are even more outrageous. In his Sept. 29 letter to Sen. Lindsey Graham, which was released just hours before the first presidential debate, Ratcliffe declassified the following: In late July 2016, U.S. intelligence agencies obtained insight into Russian intelligence analysis alleging that U.S.

Based on my experience as a CIA lawyer, I believe this particular assertion by Ratcliffe. The Inside Story of Christopher Steele’s Trump Dossier. For nearly three years, President Trump has spun an alternate reality in which he was not helped and tainted by Russia during the 2016 Presidential campaign but, rather, his political opponents and his accusers were. 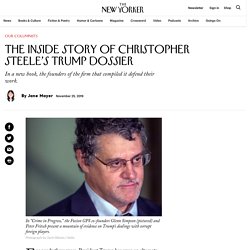 As the Shutdown Drags On, the Trump-Russia Story Is Back at Center Stage. On Friday afternoon, I wrote a column in which I argued that Donald Trump wouldn’t be able to sustain for much longer his great diversion—the political fight over his demand for $5.7 billion in funding for a southern-border wall, or, in its latest incarnation, a slatted steel barrier. 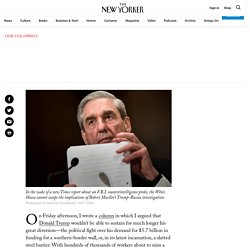 With hundreds of thousands of workers about to miss a paycheck, the blowback from the partial government shutdown was becoming too intense for Republicans to remain united behind the President, I suggested, and almost certainly he would soon be forced to re-open the government, either by caving on his funding demand or by declaring a state of emergency at the border. But I also pointed out that, from Trump’s narrow perspective, the shutdown had been successful.

A bit later on Friday, those other troubles returned to the top of the news agenda. The Times published a lengthy story that ran under the headline “F.B.I. How the Times Reported the F.B.I. Counterintelligence Investigation Into President Trump: An Interview with the Journalist Adam Goldman. On Friday evening, the Times reported that, days after President Trump fired the F.B.I. director James Comey, on May 9, 2017, the Bureau opened a counterintelligence investigation into whether the President, knowingly or unknowingly, “had been working on behalf of Russia against American interests.” 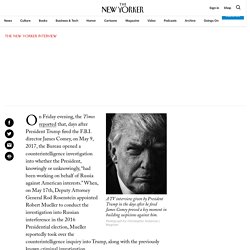 When, on May 17th, Deputy Attorney General Rod Rosenstein appointed Robert Mueller to conduct the investigation into Russian interference in the 2016 Presidential election, Mueller reportedly took over the counterintelligence inquiry into Trump, along with the previously known criminal investigation. To discuss the Times piece, I spoke by phone with Adam Goldman, who reported the story along with Michael S. 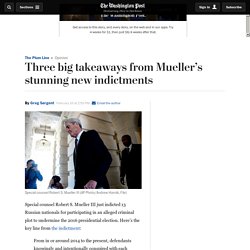 Mueller III (AP Photo/Andrew Harnik, File) Special counsel Robert S. Mueller III just indicted 13 Russian nationals for participating in an alleged criminal plot to undermine the 2016 presidential election. The Russia scandal just got bigger. And Republicans are trying to prevent an accounting. The Digger Who Commissioned the Trump-Russia Dossier Speaks. This week marks the one-year anniversary of BuzzFeed’s publication of the controversial “Russia dossier,” the document compiled by the former British spy Christopher Steele that claimed the Russian government had been “cultivating, supporting, and assisting” Donald Trump for years, and that the Kremlin was holding incriminating material about Trump, including a sex tape from a Moscow hotel room. 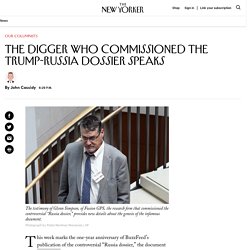 In the past twelve months, we’ve learned a good deal more about the Steele dossier, including that it was commissioned by the Washington-based intelligence firm Fusion GPS, which received funding from the Democratic National Committee and Hillary Clinton’s Presidential campaign. Democrats are eviscerating Trump on Russia. Where is the GOP? How Trump fought the intelligence on Russia and left an election threat unchecked The Washington Post examines how, nearly a year into his presidency, Trump continues to reject evidence that Russia supported his run for the White House as part of an unprecedented assault on a pillar of American democracy. 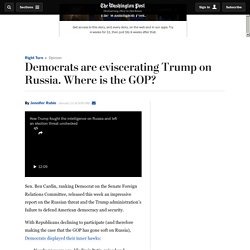 (Dalton Bennett,Thomas LeGro,John Parks,Jesse Mesner-Hage/The Washington Post) Sen. Ben Cardin, ranking Democrat on the Senate Foreign Relations Committee, released this week an impressive report on the Russian threat and the Trump administration’s failure to defend American democracy and security. With Republicans declining to participate (and therefore making the case that the GOP has gone soft on Russia), Democrats displayed their inner hawks: Nearly 20 years ago, Vladimir Putin gained and solidified power by exploiting blackmail, fears of terrorism, and war. It’s remarkable that any Republican would find that objectionable. The Digger Who Commissioned the Trump-Russia Dossier Speaks. Trump attacks Feinstein over release of testimony on Russia probe, calls for GOP to ‘take control’ Sen. 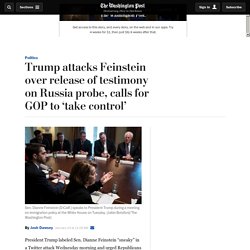 Never before has a president ignored such a clear national security threat. Ben Cardin represents Maryland in the U.S. 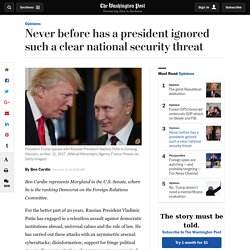 Senate, where he is the ranking Democrat on the Foreign Relations Committee. For the better part of 20 years, Russian President Vladimir Putin has engaged in a relentless assault against democratic institutions abroad, universal values and the rule of law. He has carried out these attacks with an asymmetric arsenal: cyberattacks; disinformation; support for fringe political groups; the weaponization of energy resources, organized crime and corruption; and even military aggression. Putin has used such techniques because he has operated from a position of weakness, hobbled by a faltering economy, a substandard military and few followers on the world stage. And his attacks have grown in intensity and complexity over the past few years, driven by a desire to also repress democratic aspirations among his own citizens. 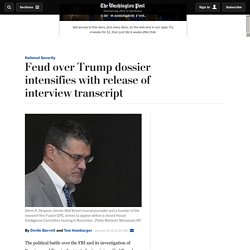 Simpson, former Wall Street Journal journalist and a founder of the research firm Fusion GPS, arrives to appear before a closed House Intelligence Committee hearing in November. (Pablo Martinez Monsivais/AP) ‘It’s not a fabrication’: Six times the firm behind the infamous dossier contradicted Trump’s claims. Glenn Simpson, co-founder of the research firm Fusion GPS, arrives on Capitol Hill in November. (Pablo Martinez Monsivais/AP) It's not made up. It wasn't politically motivated. And it did not set out with the intention to smear President Trump. That's what the co-founder of a research firm, Fusion GPS, told Congress about a dossier his firm produced during the presidential campaign. Against a backdrop of Trump and Republicans claiming the dossier was politically motivated, Senate Democrat Dianne Feinstein released the transcript, without Republican support, on Tuesday. What didn’t Republicans want you to see in the Fusion GPS transcript?

The documents leaked as the administration faces several investigations into possible collusion between the Trump campaign and Russia, including a probe by special counsel Robert S. Mueller III that brought its first indictments last week. At least nine people in Trump’s orbit had contact with Russians during campaign and transition. Contacts between Russians and Trump associates occurred multiple times Contacts between Russians and members of Donald Trump’s team occurred multiple times during the 2016 campaign and presidential transition.

Contacts between Russians and members of Donald Trump’s team occurred multiple times during the 2016 campaign and presidential transition. (Alice Li, Bastien Inzaurralde/The Washington Post) What did Donald Trump Jr. ask for at that meeting? The Russian lawyer just spoke out. Donald Trump Jr.’s emails aren’t a smoking gun. They’re a blazing gun. Here’s why. The Post’s Ruth Marcus explains why Donald Trump Jr. is in legal jeopardy. Hint: stupidity is not a legal defense. Manafort just got indicted. Here’s what Mueller likely wants to ask him now. How bad will Mueller probe get for Trump? The Papadopoulos plea may be a big tell. The Paul Manafort and Rick Gates indictment, annotated. After the Manafort Indictment, the Mueller Investigation Enters a New Phase. Three Trump campaign officials have been charged or pleaded guilty: George Papadopoulos, Paul Manafort and Rick Gates. Trump’s meltdown in anticipation of indictments is telling.

Mueller has interviewed the cybersecurity expert who said he was 'recruited to collude with the Russians' The former national security adviser Michael Flynn. Thomson Reuters A cybersecurity researcher who described being recruited to vet hacked Hillary Clinton emails last year by a GOP operative tied to President Donald Trump's campaign team has been interviewed by the FBI's special counsel, Robert Mueller, Business Insider has learned. Mueller interviewed Matt Tait, a former information-security specialist at Britain's Government Communications Headquarters who tweets as @pwnallthethings, several weeks ago, said a source familiar with the matter.

US government wiretapped former Trump campaign chairman - CNNPolitics. The government snooping continued into early this year, including a period when Manafort was known to talk to President Donald Trump. The case for Trump-Russia collusion: We’re getting very, very close. Mueller gives White House names of 6 aides he expects to question in Russia probe. Special counsel Robert S. The bad news about ‘this Russia thing’ keeps pouring in for Trump. Trump’s phone call to a GOP senator raises questions in context of Russia probe.

Mueller has a new partner in the Russia probe who could dramatically constrain Trump's pardon power. Trump’s Real-Estate Ambitions in Moscow. David Remnick Talks Spy Novels with a Former Spy. Oh, Wait. Maybe It Was Collusion. - The New York Times. The Slow-Motion Defenestration of Jeff Sessions - The Atlantic. Trump is ratcheting up his abuse of Jeff Sessions. And Sessions has no good options. What Jared Kushner's Statement Reveals About Russian Methods - The Atlantic. Sessions discussed Trump campaign-related matters with Russian ambassador, U.S. intelligence intercepts show. Sessions Discussed Campaign With Russian Ambassador - The Atlantic. Excerpts From The Times’s Interview With Trump - The New York Times. Eighth person in Trump Tower meeting is identified. The Trump Family's Increasingly Implausible Explanations - The Atlantic.

Signs Russia meddled in Republican primary too. Fear and Loathing in the Trump White House. Russian Oligarch Who Plotted to Aid Trump Was Named in Private Intelligence Dossier. Trump's Son Is Acting Just Like His Dad - Bloomberg. Trump Wanted to Collude, But Did Putin? - Bloomberg. Ukrainian efforts to sabotage Trump backfire.

Trump lashes out at Russia probe; Pence hires a lawyer. Jeff Sessions and the Trail of Unanswered Questions. Another week brings another White House policy theme amid Russia furor.