2015-2016 NCHS Research Continuum. Apple Watch App Layout Customizations: Creative Ideas For Your Wrist + How To Get Custom Shapes On Your Device. The Apple Watch is Apple's most changeable product ever. 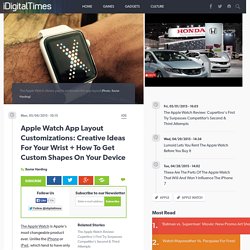 Unlike the iPhone or iPad, which tend to have only a couple of versions, the Apple Watch comes in two sizes, three finishes and a ton of different band options. Additionally, users are able to also change around one more thing: app layouts. Unlike the iPhone springboard, the Apple Watch allows you to put the app icons in any shape you want. you may choose to go with the first letter of your name like I did (see below) or a different shape altogether. Before we go to the different customizations however, here’s how you rearrange the apps on your Apple Watch.

The App Layout section of the Apple Watch application allows you to change the shape of your icon grid (Photo: iPhone) The Best Apple Watch Apps Made for Cars. Remember the Elio 3-Wheeler? 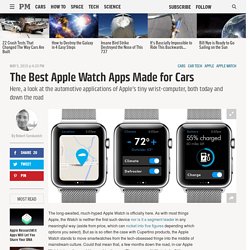 It's an ambitious daydream-mobile that promises 84 mpg from an enclosed, tandem two-seater for under $7000. As if that wasn't daring enough, Elio says that a $2000 option will turn the three-wheeler into a cloud-connected mobile device with remote start, navigation, Wi-Fi, and VoIP phone call capabilities—all of which will be available on your Apple Watch. Thanks to the ridiculously named SkyzMatic package, Elio says that vehicle location, trip data, accelerometer readings, and more will be directly beamed from the three-wheeler to your wrist.

Of course, all that relies on Elio actually producing a vehicle, something that was originally supposed to happen by December of 2014, but has since been delayed. Hyundai Blue Link Android fans, rejoice: While BMW and Porsche are fawning over the new Apple Watch, Hyundai has already had an app for Android-powered smartwatches out in the wild. Volkswagen Car-Net From: Car and Driver. 10 Apple Watch Apps For Business, Productivity. Salesforce, Microsoft, and Evernote are three of many companies developing Apple Watch apps focused on productivity and collaboration. 1 of 11 It has been a busy couple of weeks for Apple, which is currently handling preorders for its Apple Watch. 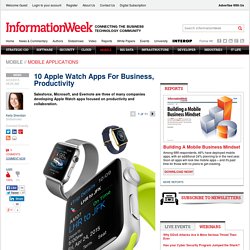 More than one million orders have been placed so far, many of which won't ship until June or July. Customers have their choice of three Watch models, two sizes, and a variety of bands. Most opted for the least expensive Sport model, which starts at $349, but a sizable chunk splurged on the next-level Watch. Even though there is a clear consumer demand for a product like Apple Watch, reviews have so far been mild. Building a case for business wearables - from Channelnomics.com.

Channel will be instrumental in helping enterprises put smart wearables to good use Send to Kindle Solution providers looking to stay ahead of the curve might want to take a closer look at a market that has consumers riveted right now: wearables. 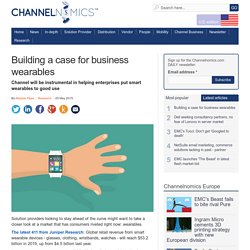 The latest 411 from Juniper Research: Global retail revenue from smart wearable devices - glasses, clothing, wristbands, watches - will reach $53.2 billion in 2019, up from $4.5 billion last year. While it's true that wearable technology hasn't made deep inroads in the business space yet, it seems to be a matter of when, not if, the crossover will take place. One of the latest studies gauging the perception of wearables in the business arena was conducted by an independent research firm for Robert Half Technology, a staffing company based in California.

How to Run Your Business from Your Wrist: Successful Meetings. Share by Matt Alderton | May 06, 2015 The new must-have tech toy is the Apple Watch. 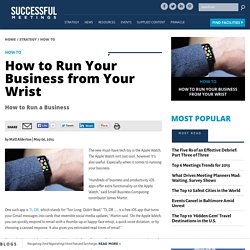 The Apple Watch isn't just cool, however. It's also useful. Especially when it comes to running your business. "Hundreds of business and productivity iOS apps offer extra functionality on the Apple Watch," said Small Business Computing contributor James Martin. One such app is TL;DR, which stands for "Too Long; Didn't Read. " Or, try the Microsoft PowerPoint app.

23 Apple Watch apps that want to change the way you travel. Travel apps were featured prominently during the reveal of the Apple Watch. 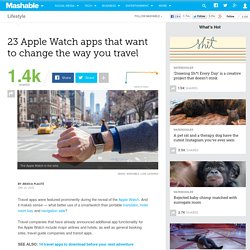 And it makes sense — what better use of a smartwatch than portable translator, hotel room key and navigation aide? Travel companies that have already announced additional app functionality for the Apple Watch include major airlines and hotels, as well as general booking sites, travel guide companies and transit apps. If you are getting your Apple Watch on Friday (or in the coming months), here are the apps that want to change how you travel.

Maps Apple Maps Providing directions is a key feature of the watch, but Apple Maps will do more than that: Hotel reviews from TripAdvisor and Booking.com are baked into the mapping app. CityMapper CityMapper is focused on public transit, providing the fastest routes to your destination based on Google Maps data. The app notes your location, providing step-by-step instructions for catching the nearest bus or train. Trip planning TripAdvisor "It's a very personal device," he said.