Apple vs the Web

Why I Turned In My iPhone and Went Android. For such a long-time Apple believer and Mac/iPhone customer, the idea of turning my back on Steve Jobs and crew, stopping my app store and media buying preferences almost entirely and choosing a divergent path is not one taken lightly. 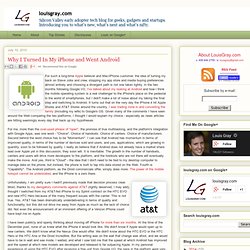 Apple Leads Smartphone Race, while Android Attracts Most Recent Customers. The race for the lead in U.S. smartphone operating system (OS) consumer market share is tighter than it has ever been. 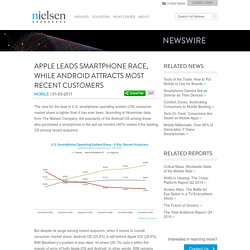 According to November data from The Nielsen Company, the popularity of the Android OS among those who purchased a smartphone in the last six months (40%) makes it the leading OS among recent acquirers. But despite its surge among recent acquirers, when it comes to overall consumer market share, Android OS (25.8%) is still behind Apple iOS (28.6%). RIM Blackberry’s position is less clear: Its share (26.1%) puts it within the margin of error of both Apple iOS and Android. In other words, RIM remains statistically tied with both Apple for first and Android for third. Apple’s clear lead over Android notwithstanding, this race might still be too close to call. This much is clear, however: All three smartphone OS leaders – Apple iOS, RIM Blackberry and Android – are benefitting from strong demand for smartphones. New iPhone Security Patent App: User Protection or 1984 iSpy? Your next iPhone might listen to your heartbeat or scan your face to identify its rightful owner — and it could react with anti-theft measures if it ended up in the wrong hands, according to a patent application recently filed by Apple. 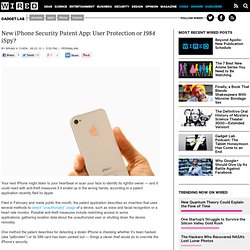 Filed in February and made public this month, the patent application describes an invention that uses several methods to detect “unauthorized” usage of a device, such as voice and facial recognition or a heart rate monitor. Possible anti-theft measures include restricting access to some applications, gathering location data about the unauthorized user or shutting down the device remotely. Samsung Unveils iPad Rival in Galaxy Tab. Is Apple the New Big Brother? - Page 1. As New Orleans kicks off its 44th Jazz and Heritage Festival this weekend, gospel, Bounce, the Blues, and the Boss reaffirm the city’s reputation as a hospitable cradle for all things musical. 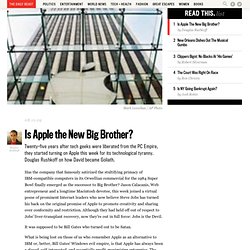 The Gospel Tent at the New Orleans Jazz and Heritage Festival, which opens today, is where Southern culture achieves an apex. In a region still addled by race, where a hard white majority marches to the disinformation drumbeat of Fox News, the Gospel Tent is a place of wonder and witness. Southern whites crave a feeling of innocence in the presence of blacks. Will Apple Embrace the Web? No. I've been meaning to write this for some time, and for all the time I delayed the more poignant the point I wanted to make started to become as new news came out further solidifying my angle. 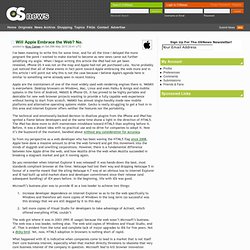 When I begun writing this article the iPad had not yet been revealed, iPhone OS 4 was not on the map and Apple had not yet purchased Lala. Is 2011 like 1994 for Apple, Twitter, Facebook, and the Web? Fact: In 1994 I thought Apple was going to own it all. 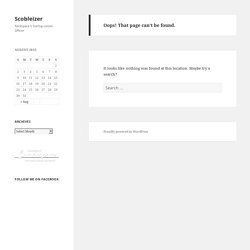 By 1999 most magazines thought it was dead. Fact: In 1992 Pointcast shipped. By 1999 it was dead. Fact: In 1994 Microsoft was beta testing a system called “Blackbird.” They killed it before shipping it. Apple vs the developpers. Attaqué au couteau le logo apple de mon portable. Adobe Gives Up on iPhone App Development. The saga of Adobe and Apple or, more precisely, Flash app development for the iPhone, is drawing to its inevitable conclusion. 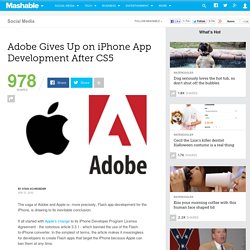 It all started with Apple's change to its iPhone Developer Program License Agreement - the notorious article 3.3.1 - which banned the use of the Flash-to-iPhone converter. An Open Letter to Apple Regarding The Company’s Approach to Conv. Dear Apple: We miss you. 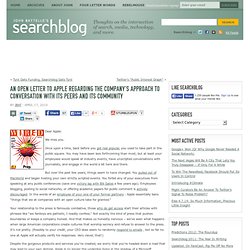 Apple - Really intense work environment. Unique culture. W3C: Hold off on deploying HTML5 in websites. HTML5, which updates the HTML specification to accommodate modern Web applications, has gained a lot of adherents in vendors like Microsoft, Google, and Apple. 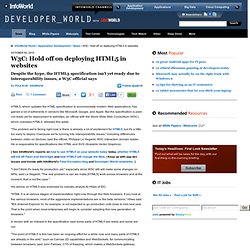 Let Developers Choose Their Tools, Apple. (A note from Harry: Here’s a “letter to the editor” from Kevin Miller, CEO of Scotland-based RunRev. 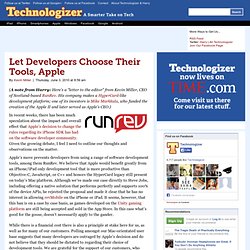 His company makes a HyperCard-like development platform; one of its investors is Mike Markkula, who funded the creation of the Apple II and later served as Apple’s CEO.) In recent weeks, there has been much speculation about the impact and overall effect that Apple’s decision to change the rules regarding its iPhone SDK has had on the software developer community.

Given the growing debate, I feel I need to outline our thoughts and observations on the matter. Apple’s move prevents developers from using a range of software development tools, among them RunRev. We believe that Apple would benefit greatly from an iPhone/iPad only development tool that is more productive than Objective-C, JavaScript, or C++ and honors the HyperCard legacy still present on today’s Mac platform. While there is a financial cost there is also a principle at stake here for us, as well as for many of our customers.