Amazon Reverses Course, Encryption Returning for Fire Devices. Amazon.com Inc. will restore encryption as a security option on its tablets and other devices that use the Fire operating system, following a customer backlash driven by increased sensitivity about data protection as Apple Inc. grapples with the FBI over access to a terrorist’s iPhone. 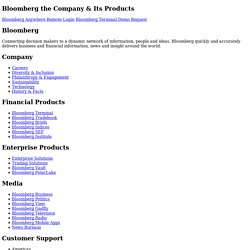 Apple vs FBI: Microsoft, Google and others rally behind iPhone maker as it moves motion to vacate court order. Silicon Valley's tech giants may be staunch rivals in the marketplace but are displaying a rare united front in backing Apple's battle against the FBI. 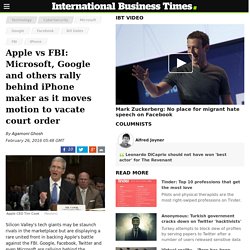 Google, Facebook, Twitter and even Microsoft are rallying behind the iPhone-maker against the San Bernardino order that Apple has challenged. Gates 'disappointed' in reports he sides with FBI in Apple case. The co-founder of Microsoft commented Monday on the ongoing battle between Apple and the FBI over breaking into an iPhone belonging to one of the San Bernardino, California, attackers. 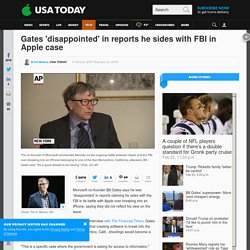 Bill Gates said, "It's a good debate to be having. " (Feb. 22) AP Microsoft co-founder Bill Gates says he was 'disappointed' in reports claiming he sides with the FBI in its battle with Apple over breaking into an iPhone, saying they did not reflect his view on the issue. During an interview with The Financial Times, Gates disputed concerns by Apple CEO Tim Cook that creating software to break into the phone of one of the killers in the San Bernardino, Calif., shootings would become a "master key" for access to any iPhone. "This is a specific case where the government is asking for access to information," Gates told The Financial Times. However, during an interview later Tuesday with Bloomberg, Gates seemed to dispute headlines claiming he agrees with the FBI in this situation.

Julie Brill: Why the EU-U.S. Privacy Shield will work - The Digital Post. The Digital Post speaks with FTC Commissioner Julie Brill about the new ‘Safe Harbour’, the implications of the EU privacy reform, and privacy issues arising from the boom of the Internet of Thing. 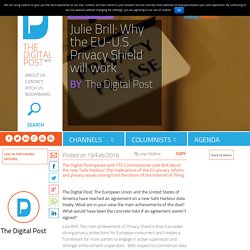 The Digital Post: The European Union and the United States of America have reached an agreement on a new Safe Harbour data treaty. What are in your view the main achievements of the deal? What would have been the concrete risks if an agreement weren’t signed? Julie Brill: The main achievement of Privacy Shield is that it provides strong privacy protections for European consumers and creates a framework for more parties to engage in active supervision and stronger enforcement cooperation. With respect to commercial data practices, Privacy Shield will provide stronger privacy protections than Safe Harbor did – through beefed up onward transfer requirements, and in other ways.

China's Huawei backs Apple in fight over encryption. Reform Government Surveillance. Apple supported by Google and WhatsApp in FBI encryption fight. Google CEO Sundar Pichai doesn't think Apple should help the FBI hack the San Bernardino shooter's iPhone either. When he drives his BMW 3 Series for Uber, Jasper Fu is not really there for the money. 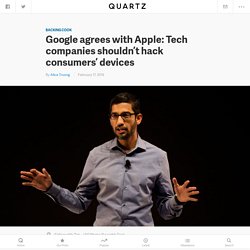 Once, when a wealthy lady angered him by accusing him of taking a longer route to earn a higher fare, he finished the ride on the app early, and drove her home for free. He earns 3,000 yuan ($469) a month by driving two hours a day on average—that’s just one tenth of the salary he earns as a sales manager. “I don’t like driving,” the 33-year-old with a pony tail, stud earrings, and a 108-bead Buddhist bracelet told me at a Shanghai cafe in early November, “but I like to talk to people.”

Fu is also known as “190 cm,” his nickname on WeChat, which refers to his height, a point of pride. A happily married Beijing man with a Shanghai wife, Fu splits his time equally between the two cities for his business and family. “Under no other circumstance can I find a stranger to talk with me for like 10 to 20 minutes,” he said. But there’s no such stereotype for drivers—especially when you own the car yourself. Why Google Trailing Apple on Encryption Support Is a Human Rights Issue. 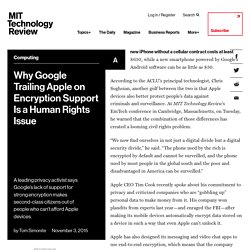 A new iPhone without a cellular contract costs at least $650, while a new smartphone powered by Google’s Android software can be as little as $50. According to the ACLU’s principal technologist, Chris Soghoian, another gulf between the two is that Apple devices also better protect people’s data against criminals and surveillance. At MIT Technology Review’s EmTech conference in Cambridge, Massachusetts, on Tuesday, he warned that the combination of those differences has created a looming civil rights problem. “We now find ourselves in not just a digital divide but a digital security divide,” he said. “The phone used by the rich is encrypted by default and cannot be surveilled, and the phone used by most people in the global south and the poor and disadvantaged in America can be surveilled.”

Google CEO: FBI's request of Apple could set a 'troubling precedent' AT&T CEO calls for Congress to decide on encryption policy, says it’s not Tim Cook’s decision. AT&T CEO Randall Stephenson is the latest to weigh in on the issue of data encryption policy with the executive telling The Wall Street Journal that Apple CEO Tim Cook and other tech execs should leave the decision making on encryption policy up to Congress: “I don’t think it is Silicon Valley’s decision to make about whether encryption is the right thing to do. 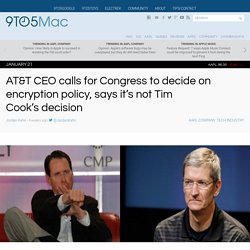 I understand Tim Cook’s decision, but I don’t think it’s his decision to make”… I personally think that this is an issue that should be decided by the American people and Congress, not by companies,”…The AT&T chief said his own company has been unfairly singled out in the debate over access to data. “It is silliness to say there’s some kind of conspiracy between the U.S. government and AT&T,” he said, adding that the company turns over information only when accompanied by a warrant or court order.

But the issue is once again in the spotlight as it becomes a topic of interest during recent presidential debates. Encryption row: Google, WhatsApp, and Mozilla support Apple in FBI fight. Rules need to catch up with tech to protect privacy: Microsoft. NEW DELHI: Expressing concern over increasing intervention by governments to access consumer data, software giant Microsoft today said regulations need to keep pace with rapidly changing technology to secure and protect privacy of individuals. 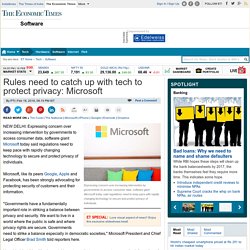 Microsoft, like its peers Google, Apple and Facebook, has been strongly advocating for protecting security of customers and their information. "Governments have a fundamentally important role in striking a balance between privacy and security. We want to live in a world where the public is safe and where privacy rights are secure. Governments need to strike a balance especially in democratic societies," Microsoft President and Chief Legal Officer Brad Smith told reporters here. He added that it is of fundamental importance that governments access the information of people through proper legal processes that respect the rule of the law. The "unprecedented step" would threaten the security of its customers, Cook wrote in an open letter to customers. ?tag=nl. The CEOs of Google and WhatsApp have thrown their support behind Apple's decision to fight against a US Federal Court order requiring the company to develop a special version of iOS to help the FBI access data on a terror suspect's iPhone. 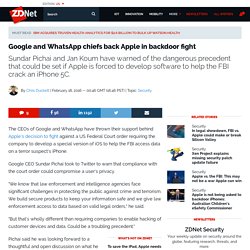 Google CEO Sundar Pichai took to Twitter to warn that compliance with the court order could compromise a user's privacy. "We know that law enforcement and intelligence agencies face significant challenges in protecting the public against crime and terrorism. Google, WhatsApp and Snowden back Apple against FBI. Tech giants Google and WhatsApp and whistleblower Edward Snowden are backing Apple’s stance over the encryption technology used in its iPhone smartphones.

Apple has been ordered by a US federal magistrate to help the FBI unlock the iPhone belonging to one of the San Bernardino shooters, but in a letter published on the company’s website, chief executive Tim Cook said his company would fight the move. Now Google chief executive Sundar Pichai has given the stance his backing. “Important post by @tim_cook.

Forcing companies to enable hacking could compromise users’ privacy,” wrote Google’s boss, as part of a short series of tweets addressing the issue. “We know that law enforcement and intelligence agencies face significant challenges in protecting the public against crime and terrorism. Pichai added that he was “looking forward to a thoughtful and open discussion on this important issue”. “We must not allow this dangerous precedent to be set. US senator Tom Cotton went further. As of today, Google, Apple and Amazon won a big battle to bring you cable TV. Big Cable has just been dealt a big — and maybe mortal — blow. If you are a Comcast or Time Warner Cable subscriber, you're familiar with that trapped feeling: you don't really have any options to get cable besides your set-top box, and the customer service pains and high costs that go with it.

On Thursday, the U.S. government took its first big, official step to end that system. The Federal Communications Commission has adopted a series of proposed rules that would allow customers to begin using cable boxes from companies other than their cable provider. In fact, consumers will be able to get cable TV from a multitude of devices, when the technology catches up. Facebook and Twitter back Apple in phone encryption battle with FBI. Facebook and Twitter stepped into the battle with the FBI, with both companies pledging that they “stand with Apple” and will “aggressively fight” attempts to weaken encryption.

Apple is heading deeper in to a legal battle with the FBI, which is attempting to access encrypted information on an iPhone used by one of the San Bernardino killers. “We condemn terrorism and have total solidarity with victims of terror. Those who seek to praise, promote, or plan terrorist acts have no place on our services,” Facebook said in a statement Thursday. “However, we will continue to fight aggressively against requirements for companies to weaken the security of their systems. These demands would create a chilling precedent and obstruct companies’ efforts to secure their products.” Shortly before, Twitter’s CEO Jack Dorsey tweeted: “We stand with @timcook and Apple (and thank him for his leadership)!”