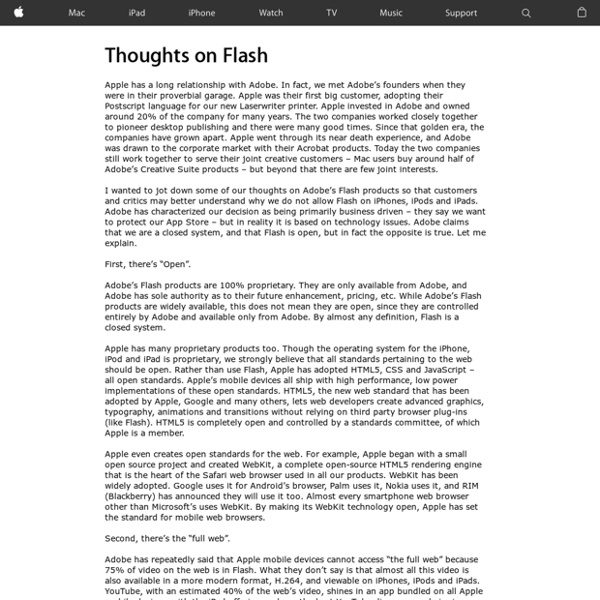 Apple has a long relationship with Adobe. In fact, we met Adobe’s founders when they were in their proverbial garage. Apple was their first big customer, adopting their Postscript language for our new Laserwriter printer. Apple invested in Adobe and owned around 20% of the company for many years. The two companies worked closely together to pioneer desktop publishing and there were many good times. Since that golden era, the companies have grown apart. I wanted to jot down some of our thoughts on Adobe’s Flash products so that customers and critics may better understand why we do not allow Flash on iPhones, iPods and iPads. First, there’s “Open”. Adobe’s Flash products are 100% proprietary. Apple has many proprietary products too. Apple even creates open standards for the web. Second, there’s the “full web”. Adobe has repeatedly said that Apple mobile devices cannot access “the full web” because 75% of video on the web is in Flash. Third, there’s reliability, security and performance.

Adobe respond to Jobs' "thoughts on Flash" The Wall Street Journal has had a short live-blog session with Adobe CEO, Shantanu Narayen, regarding today's "Thoughts on Flash" letter by Steve Jobs. In the interview, Narayen says that the technology problems Jobs portrays are nothing more than a "smokescreen," and that over 100 applications made by Adobe software can currently be found in the App Store. Narayen also goes on the attack, stating that if Adobe really is the number one cause of Mac crashes, then the problem is with the Apple OS, and not Adobe's product. In addition to addressing other issues, Narayen makes Adobe's stance on the matter clear--customers will be the ones to decide what technology to use, and Adobe firmly believes in a multi-platform world.

MPEG-4 AVC H.264 or MPEG-4 Part 10, Advanced Video Coding (MPEG-4 AVC) is a block-oriented motion-compensation-based video compression standard. As of 2014[update], it is one of the most commonly used formats for the recording, compression, and distribution of video content.[1] It supports resolutions up to 8192×4320, including 8K UHD.[2] The intent of the H.264/AVC project was to create a standard capable of providing good video quality at substantially lower bit rates than previous standards (i.e., half or less the bit rate of MPEG-2, H.263, or MPEG-4 Part 2), without increasing the complexity of design so much that it would be impractical or excessively expensive to implement. This was achieved with new features such as an improved discrete cosine transform (DCT) algorithm and multi-picture inter-picture prediction. H.264 was standardized by the ITU-T Video Coding Experts Group (VCEG) together with the ISO/IEC JTC1 Moving Picture Experts Group (MPEG).

Flex and Flash Developer – Jesse Warden dot Kizz-ohm » Blog Arch Apple has posted Steve Jobs’ “Thoughts on Flash“. There are a lot of lies and half truths. No one will care. The article has enough valid points that people won’t check up on them. That said, here’s my attempts to correct the lies. Lie #1: “Adobe’s Flash products are 100% proprietary.” IEEE 802.11y-2008 IEEE 802.11y-2008 is an amendment to the IEEE 802.11-2007 standard that enables high powered data transfer equipment to operate using the 802.11a protocol on a co-primary basis in the 3650 to 3700 MHz band in the United States, except when near a grandfathered satellite earth station.[1] It was approved for publication by the IEEE on September 26, 2008. Background[edit] In June 2007 the FCC issued final rules for a novel “light licensing” scheme in the 3650–3700 MHz band.[2] Licensees pay a small fee for a nationwide, non-exclusive license. They then pay an additional nominal fee for each high powered base station that they deploy.

Adobe Gives up on Apple, Welcomes Android Adobe is officially giving up on Apple. Or rather, Apple gave up on Adobe and Adobe is just now admitting it. In any event, the news is that Adobe's "Packager for iPhone," the bundled tool in Flash Professional that lets Flash developers leverage their existing skills to produce iPhone apps, shall be no more. Hyper Text Coffee Pot Control Protocol The Hyper Text Coffee Pot Control Protocol (HTCPCP) is a facetious communications protocol for controlling, monitoring, and diagnosing coffee pots. It is specified in RFC 2324, published on 1 April 1998 as an April Fools' Day RFC,[1] as part of an April Fools prank.[2] An extension is published as RFC 7168 on 1 April 2014[3] to support brewing teas, which is also an April Fools' Day RFC. Protocol[edit] RFC 2324 was written by Larry Masinter, who describes it as a satire, saying "This has a serious purpose – it identifies many of the ways in which HTTP has been extended inappropriately.

Designers checklist advices — Project by Adrien Heury 10/10Be proud of your work Anton RepponenCreative director • Fantasy interactive • NYC I know so many designers who aren't happy with their work at the end of a project. “It might have been so much cooler,” they say. "If only I'd known that this would be the final result”.