Apple vs Flash...or vs Google?

Tariq KRIM: I am starting to think tha... Flash Player To Come Bundled With Google Chrome, New Browser Plu. The rumors were true: Adobe and Google are tightening their partnership, seemingly both warily eying Apple in the process – and Mozilla plays a role in this story as well. 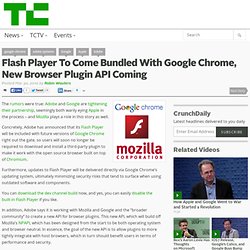 Concretely, Adobe has announced that its Flash Player will be included with future versions of Google Chrome right out the gate, so users will soon no longer be required to download and install a third-party plugin to make it work with the open source browser built on top of Chromium. Furthermore, updates to Flash Player will be delivered directly via Google Chrome’s updating system, ultimately minimizing security risks that tend to surface when using outdated software and components. You can download the dev channel build now, and yes, you can easily disable the built-in Flash Player if you like. In addition, Adobe says it is working with Mozilla and Google and the “broader community” to create a new API for browser plugins.

With More Flash, Is Google About To Cut Off The HTML5 Nose To Sp. Google isn’t talking, but what we’re hearing is that this could be related to the Open Screen Project that Google signed up for late last year. 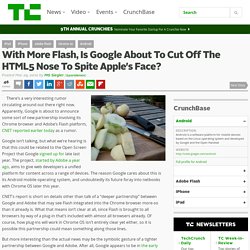 The project, started by Adobe a year ago, aims to give web developers a unified platform for content across a range of devices. The reason Google cares about this is its Android mobile operating system, and undoubtedly its future foray into netbooks with Chrome OS later this year. CNET’s report is short on details other than talk of a “deeper partnership” between Google and Adobe that may see Flash integrated into the Chrome browser more-so than it already is. What that means isn’t clear at all, since Flash is brought to all browsers by way of a plug-in that’s included with almost all browsers already. Of course, how plug-ins will work in Chrome OS isn’t entirely clear yet either, so it is possible this partnership could mean something along those lines. Yep, Chrome OS Is Getting Deep Flash Integration Too. HTML5 for iPad Won’t Kill Flash, But Could Change Apps.

Publications, media companies and web developers have a new way to provide video on the Flash-free zones that are the iPhone and the impending iPad: using HTML5 to stream video within the Safari browser. 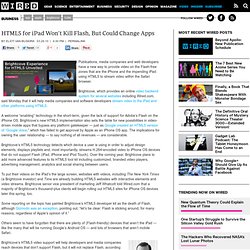 Brightcove, which provides an online video backend system for several websites including Wired.com, said Monday that it will help media companies and software developers stream video to the iPad and other platforms using HTML5. A welcome “enabling” technology in the short-term, given the lack of support for Adobe’s Flash on the iPhone OS, Brightcove’s new HTML5 implementation also sets the table for new possibilities in video-driven mobile apps that bypass any platform gatekeeper — just as Google created an HTML5 version of “Google Voice,” which has failed to get approval by Apple as an iPhone OS app.

The implications for owning the user relationship — to say nothing of all revenues — are considerable. Jeff Whatcott (photo courtesy of Brightcove) See Also: Kyte Jumps On the iPad’s HTML5 Bandwagon And Prepares An App SDK. When Steve Jobs tells the technology industry to get in line, it gets in line pretty quick. 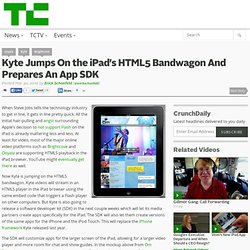 All the initial hair-pulling and angst surrounding Apple’s decision to not support Flash on the iPad is already mattering less and less. At least for video, most of the major online video platforms such as Brightcove and Ooyala are supporting HTML5 playback in the iPad browser. YouTube might eventually get there as well. The context... @Ed – I was the analyst who did the forecast, so a few points: First, the tablet market as whole will benefit from its ability to eat into many existing large-volume markets. 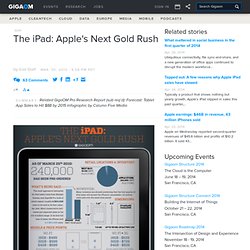 The obvious ones are netbooks, e-readers, and – of course – the media player market (like the Apple Touch). Gaming is going to be very significant. I think Sony and Nintendo have to be extremely worried, as portable gaming volumes are already getting hit hard by the Touch, and I think we’ll see the iPad eat into that market in a big way. Built into my assumptions is also a believe Apple will reduce prices over time, which will significantly increase volumes as well. Worried About Flash on the iPad? Apple Tries to Ease Your Fears. Will popular websites, especially those from news and entertainment companies, work on the iPad? 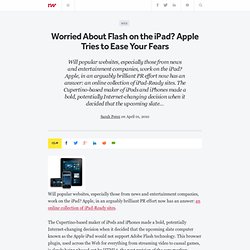 Apple, in an arguably brilliant PR effort now has an answer: an online collection of iPad-Ready sites. The Cupertino-based maker of iPods and iPhones made a bold, potentially Internet-changing decision when it decided that the upcoming slate computer known as the Apple iPad would not support Adobe Flash technology. This browser plugin, used across the Web for everything from streaming video to casual games, is slowly being phased out by HTML5, the next revision of the core markup language used in the creation of Web pages. The video support included in the upcoming Web standard requires no downloadable, installable plugin in order to work. 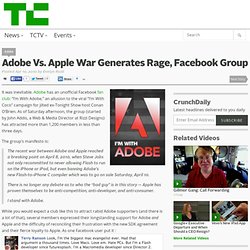 Adobe has an unofficial Facebook fan club: “I’m With Adobe,” an allusion to the viral “I’m With Coco” campaign for jilted ex-Tonight Show host Conan O’Brien. As of Saturday afternoon, the group (started by John Addis, a Web & Media Director at Rizzi Designs) has attracted more than 1,200 members in less than three days. The group’s manifesto is: The recent war between Adobe and Apple reached a breaking point on April 8, 2010, when Steve Jobs not only recommitted to never allowing Flash to run on the iPhone or iPad, but even banning Adobe’s new Flash-to-iPhone C compiler which was to go on sale Saturday, April 10.There is no longer any debate as to who the “bad guy” is in this story — Apple has proven themselves to be anti-competition, anti-developer, and anti-consumer.I stand with Adobe.

Thoughts on Flash. Our thoughts on open markets I Adobe. Flash Co-creator: Apple Is Destroying the Open Web. Flash Co-creator and former Macromedia CTO Jonathan Gay is disappointed that the media is letting Steve Jobs trash Adobe’s Flash as a closed platform while Apple is at the same time advocating for H.264 and a closed app environment that doesn’t support and cross-platform development. 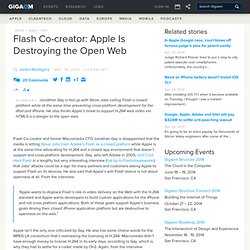 Gay, who left Adobe in 2005, told Cold Hard Flash in a lengthy but very interesting interview (hat tip to Flashstreamworks) that Jobs’ attacks could be a sign for many partners and customers asking Apple to support Flash on its devices. Time Warner, NBC Universal back Adobe's Flash vs. Apple - NYPOST. Adobe’s Flash video software has become a flashpoint in negotiations between Apple CEO Steve Jobs and Big Media. 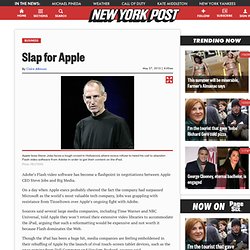 On a day when Apple execs probably cheered the fact the company had surpassed Microsoft as the world’s most valuable tech company, Jobs was grappling with resistance from Tinseltown over Apple’s ongoing fight with Adobe. Sources said several large media companies, including Time Warner and NBC Universal, told Apple they won’t retool their extensive video libraries to accommodate the iPad, arguing that such a reformatting would be expensive and not worth it because Flash dominates the Web. Though the iPad has been a huge hit, media companies are feeling emboldened in their rebuffing of Apple by the launch of rival touch-screen tablet devices, such as the ones coming from Dell Computer and Hewlett-Packard, sources said.