19 Things You Can Do in iOS 12 That You Couldn't Do Before. NEW and UPDATED Periodic table of iPad apps for Primary aged pupils for iOS 11. The Sweet Setup — We recommend the best apps for iPhone, iPad, and Mac.

The Best Mac Apps. Here you have it – our ultimate list of must-have Mac apps. 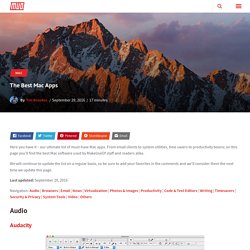 From email clients to system utilities, time savers to productivity boons; on this page you’ll find the best Mac software used by MakeUseOf staff and readers alike. We will continue to update the list on a regular basis, so be sure to add your favorites in the comments and we’ll consider them the next time we update this page. Last updated: September 29, 2016 Navigation: Audio | Browsers | Email | News | Virtualization | Photos & Images | Productivity | Code & Text Editors | Writing | Timesavers | Security & Privacy | System Tools | Video | Others Audio Audacity An open-source, cross-platform audio editor that can handle most common audio tasks without breaking the bank. Fission ($29) If Audacity isn’t cutting it and you want a polished, lossless audio editor built from the ground up for macOS, Fission is a solid option.

Soundflower Clementine Tomahawk Spotify. iOS 10: Release date, features and everything else you need to know - CNET. iOS 10 is here. 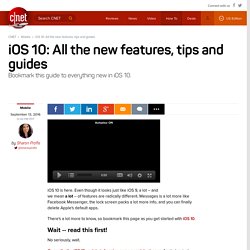 Even though it looks just like iOS 9, a lot -- and we mean a lot -- of features are radically different. Messages is a lot more like Facebook Messenger, the lock screen packs a lot more info, and you can finally delete Apple's default apps. iOS 10: Release date, features and everything else you need to know - CNET. Periodic table of iPad apps vol 2. iPad Published on June 18th, 2016 | by Mark Anderson First things first. 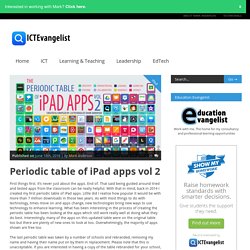 It’s never just about the apps. End of. That said being guided around tried and tested apps from the classroom can be really helpful. The last periodic table was taken by a number of schools and rebranded, removing my name and having their name put on by them in replacement. For those that are interested, I made it using Photoshop. If you’d like a higher resolution version of the image, please download it from here or share this link >> Tags: #iPad, ipad apps, learning, periodic table, periodic table vol 2 About the Author Mark Anderson Mark Anderson is a former assistant headteacher, an award winning blogger and education technology expert, keynote speaker, best-selling author of 'Perfect ICT Every Lesson' and independent consultant. The complete list of Siri commands. There's a lot you can do with Apple's virtual assistant -- and some things you can't do. 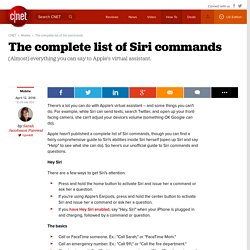 For example, while Siri can send texts, search Twitter, and open up your front-facing camera, she can't adjust your device's volume (something OK Google can do). Everything You Can Do With 3D Touch on Your iPhone. It’s really just a fancy name for a pressure-sensitive screen, but adds a whole array of extra input commands to iOS. 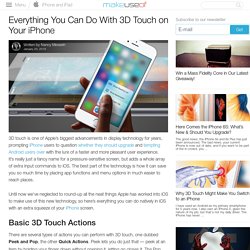 The best part of the technology is how it can save you so much time by placing app functions and menu options in much easier to reach places. Until now we’ve neglected to round-up all the neat things Apple has worked into iOS to make use of this new technology, so here’s everything you can do natively in iOS with an extra squeeze of your iPhone screen. Basic 3D Touch Actions There are several types of actions you can perform with 3D touch, one dubbed Peek and Pop, the other Quick Actions.

Cnet. A new iOS update is brewing, coming soon to your iPhone. iOS 9.3 is now available for developers and includes some welcome upgrades that'll help you sleep better and stay organized. 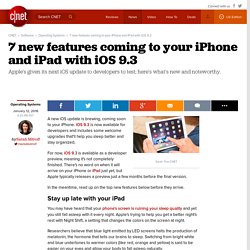 8 Amazing Things You Can Do With an iPhone. Over the years, we’ve taken a look at several creative and unique uses for the iPhone. 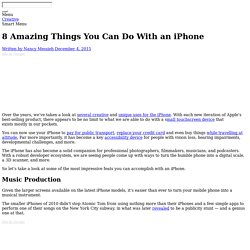 With each new iteration of Apple’s best-selling product, there appears to be no limit to what we are able to do with a small touchscreen device that exists mostly in our pockets. You can now use your iPhone to pay for public transport, replace your credit card and even buy things while travelling at altitude. Far more importantly, it has become a key accessibility device for people with vision loss, hearing impairments, developmental challenges, and more. The iPhone has also become a solid companion for professional photographers, filmmakers, musicians, and podcasters. How to Use Split View & Slide Over on iPads. When Apple introduced iOS 9, it was more of a refinement than an overhaul. 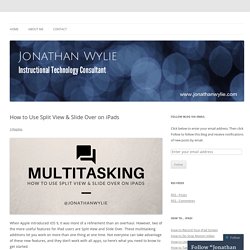 However, two of the more useful features for iPad users are Split View and Slide Over. iPad Pro: An Educator’s First Impressions. My iPad Pro arrived this past week to my excitement. 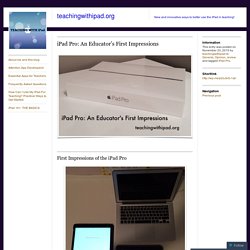 I have used it for just a few days now at this point. There are absolutely no regrets about this large purchase (I joked that it did cost exactly half of what I paid for my first car!). I am thoroughly impressed by this device. The larger size of this iPad gives it a new device feeling, as opposed to just a refreshed model of the same dimensions. For a size reference, here is the iPad Pro side by side with the iPad 4: 8 Hidden Apple Watch Features. The Apple Watch has a number of pretty obvious features including the ability to make and receive phone calls, get directions, and monitor your movement. 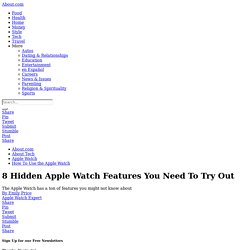 The scenario: Using Explain Everything to animate a comic book made in Book Creator, to create a fun video. Book Creator 4.0 has just been released onto the App Store. With this update there are now comic book templates and styles added to the app, to make really simple and fun comic books. We’re going to go through creating the comic book, exporting it as a PDF to Explain Everything, recording an animation using the pan and zoom tool, and exporting the end result as a video. 10 Great iOS 9 Features for Teachers. October 13, 2015 iOS 9 is the newest release of Apple’s operating system. iOS 9 comes with a bunch of powerful features and enhancements to improve your productivity and performance.We have been experimenting with some of the features embedded in this update and decided to share with what we think are the best things in iOS 9 for us in education. 1- Picture in Picture While using FaceTime or watching a video, press the Home button and your video screen scales down to a corner of your display.

Tap to open a second app, and your video continues to play — even while you use the other app. Tweetbot 4 Review: Bigger Bot – MacStories. There have only been two great Twitter apps for iPad since 2010: Loren Brichter's Twitter, and the original Tweetbot for iPad. As I reminisced last year in my look at the state of Twitter clients, iOS apps for Twitter are no longer the welcoming, crowded design playground they once were.

Developing a Twitter client used to be an exercise in taste and restraint – a test for designers and developers who sought to combine the complex networking of Twitter with a minimalist, nimble approach best suited for a smartphone. Twitter reclaimed their keys to the playground when they began offering "guidance" on the "best opportunities" available to third-party developers. Four years into that shift, no major change appears to be in sight. Largely because of the economic realities of Twitter clients, few developers ever invested in a Twitter app for iPad that wasn't a cost-effective adaptation of its iPhone counterpart. With two exceptions. We Asked a Cultural Historian: Are Apple Stores the New Temples?

The Broadway Apple Store (Photo: Matt Buchanan/Flickr) In more ancient times, when communal experiences were mediated by religion, crowds used to gather outside temples on feast days. In Biblical times, for instance, on pilgrimage holidays like Passover, Jewish people were supposed to travel to Jerusalem, to be present at the Holy Temple, where the High Priest would make a sacrifice to God.

Nowadays, we have Apple Release Day—the Feast of St. Jobs—when faithful customers gather outside Apple stores and await the renewal of a next generation iPhone. The Best New iOS 9 Feature for Schools! Live Photos are a gimmick — says nobody who has young kids, ever — Vantage. I tweeted that a little earlier today but this is kind of a big deal to me so I’m going to spew out a few more words on the topic.

I get it, the new iPhone feature Live Photos might seem kind of gimmicky, but let me show you why it’s quite the opposite; and why Live Photos themselves are priceless. This is a cute little photo of my daughter Acacia I took today while messing around with my new iPhone 6S. That moment was distinct but unfortunately, the photo really isn’t. I have hundreds like it. A Must Have Guide on How to Evaluate Apps for The Classroom. How the watchOS 2.0 Update Will Make Your Apple Watch Even Better.

Though the Apple Watch went on sale just a little over two months ago, Apple is set to release the next major update to the watchOS software that powers the device in the Fall. Streaming Music, iOS 9 and 'El Capitan': What You Need to Know From Apple's WWDC. Apple’s Worldwide Developers Conference (WWDC) happened today, which means the company made a ton of announcements. Apple executives talked about updates to its desktop operating system, OS X, as well as its mobile operating system iOS. This year, the company had another platform to talk about: the Apple Watch.

Upon This Wrist — The Message. Very few notice the thing on the wrist. That makes me happy. But some do see it. Once they see it they say, Oh is that the thing? And I say, Yes it is the thing. Maximize Google Drive on the iPad and iOS.