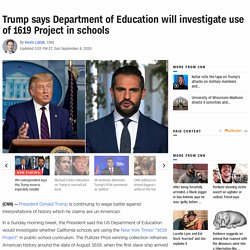 The Pulitzer-Prize winning collection reframes American history around the date of August 1619, when the first slave ship arrived on America's shores. "Department of Education is looking at this. If so, they will not be funded! " he wrote on Twitter, citing a message from an unverified account saying it was being taught in schools there. Untitled. The president has recently taken to pointing to the volume of tests that have been administered — a misleading figure because, according to health experts, the more relevant figure is how many people are being tested per capita. In that regard, the United States still lags well behind other nations like South Korea. Other governors also made it clear to Mr. Trump that they needed more supplies, if somewhat more delicately. Gov. Roy Cooper of North Carolina, a Democrat, told Mr. Much ado about booing. Sign Up for Our free email newsletters. 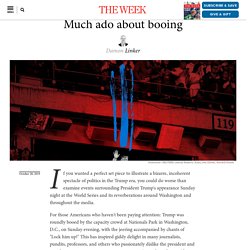 George Conway: Trump Is Unfit for Office. On a third-down play last season, the Washington Redskins quarterback Alex Smith stood in shotgun formation, five yards behind the line of scrimmage. 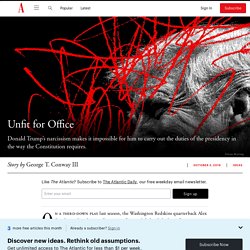 As he called his signals, a Houston Texans cornerback, Kareem Jackson, suddenly sprinted forward from a position four yards behind the defensive line. To hear more feature stories, see our full list or get the Audm iPhone app. Jackson’s timing was perfect. The ball was snapped. The Texans’ left defensive end, J.J. How Stephen Miller Seized the Moment to Battle Immigration. Once a lonely cause, restrictionism had grown into a mature movement — an intellectual ecosystem of sorts — with groups specializing in areas as diverse as litigation and voter mobilization. 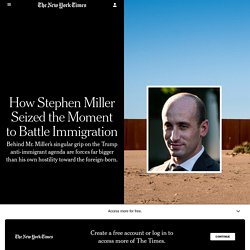 When Mr. Sessions claimed on a conference call that the Gang of Eight bill threatened jobs, an analyst from the Center for Immigration Studies was on the line to vouch for the data, and Breitbart covered it as news. When the center presented its journalism award, Mr. - The Washington Post. Read Excerpts: The Times Publisher Asks Trump About ‘Anti-Press Rhetoric’ Democrats have forgotten how playground bullying works. Sign Up for Our free email newsletters The Democratic Party is struggling mightily to figure out how to confront President Trump's staggering corruption. More and more of its members of Congress are getting behind the idea of an impeachment inquiry, but the party leadership is (somewhat mysteriously) trying desperately to avoid the issue. Speaker of the House Nancy Pelosi has deployed one excuse after the next, most recently the absolutely preposterous theory that Trump is plotting to get himself impeached as part of a Snidely Whiplash-esque scheme. Meanwhile, Senate Minority Leader Chuck Schumer, who has less power but greater freedom, is all but absent from the entire discussion. Here's a suggestion: Democrats need to remember how playground bullying works. The first rule of bullies is that they are drawn to perceived weakness. Untitled.

- The Washington Post. Trump Remakes America. Inside Trump’s Hour-by-Hour Battle for Self-Preservation. WASHINGTON — Around 5:30 each morning, President Trump wakes and tunes into the television in the White House’s master bedroom. He flips to CNN for news, moves to “Fox & Friends” for comfort and messaging ideas, and sometimes watches MSNBC’s “Morning Joe” because, friends suspect, it fires him up for the day. Energized, infuriated — often a gumbo of both — Mr. The Madman and the Bomb. The scene from the White House south lawn on August 9, 1974, is vivid in the nation’s memory. 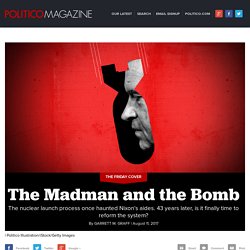 That morning, President Richard Nixon famously boarded Marine One for the final time, put on a wide grin and fired off a final double-V to the assembled crowd. But one of the most interesting aspects of that day is what didn’t happen on the south lawn: Even though Nixon had more than two hours left in his tenure, the most critical tool of the modern presidency had already been taken away from him. He never noticed it, but the nuclear “football” didn’t travel with him as he boarded the helicopter, and later, Air Force One for his flight back to California. Story Continued Below. Poll finds Trump’s standing weakened since springtime. US President Donald Trump waves to well wishers as he arrives at the 72nd US Women's Open Golf Championship at Trump National Golf Course in Bedminister, New Jersey, July 15, 2017. 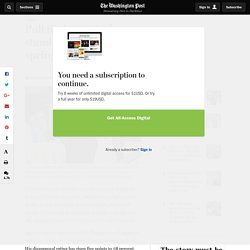 (Saul Loeb/AFP/Getty Images) President Trump’s standing with the American people has deteriorated since the spring, buffeted by perceptions of a decline in U.S. leadership abroad, a stalled presidential agenda at home and an unpopular Republican health-care bill, according to a new Washington Post-ABC News poll. New details emerge on Moscow real estate deal that led to the Trump-Kremlin alliance. While in Moscow for the Miss Universe pageant in November 2013, Donald Trump entered into a formal business deal with Aras Agalarov, a Russian oligarch close to Vladimir Putin, to construct a Trump Tower in the Russian capital. 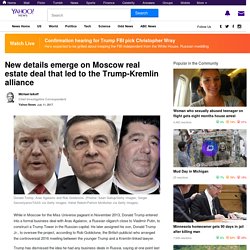 He later assigned his son, Donald Trump Jr., to oversee the project, according to Rob Goldstone, the British publicist who arranged the controversial 2016 meeting between the younger Trump and a Kremlin-linked lawyer. Trump has dismissed the idea he had any business deals in Russia, saying at one point last October, “I have nothing to do with Russia.” But Goldstone’s account, provided in an extensive interview in March in New York, offers new details of the proposed Trump project that appears to have been further along than most previous reports have suggested, and even included a trip by Ivanka Trump to Moscow to identify potential sites. Trump, Mika and Joe all show zero ability to act like adults. Poll shows U.S. tumbling in world’s regard under Trump.

President Donald Trump gestures to members of the media gathered in the Rose Garden at the White House in Washington, D.C. 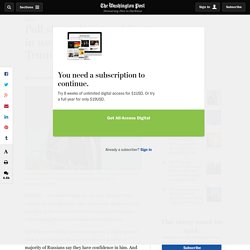 (Kevin Lamarque/Reuters) BERLIN — President Trump has alarmed citizens of the nation’s closest allies and others worldwide, diminishing the standing of the United States in their eyes, according to a wide-ranging international study released Monday. But in the survey of 37 countries, Russia is a bright spot for Trump. As beleaguered as the president is at home, a majority of Russians say they have confidence in him.

Berkeley author George Lakoff says, 'Don't underestimate Trump' — Berkeleyside. George Lakoff, retired UC Berkeley professor and author of Don’t Think of an Elephant, is one of a very few people in Berkeley who does not underestimate Donald Trump. “Trump is not stupid,” he tells anyone who will listen. “He is a super salesman, and he knows how to change your brain and use it to his advantage.” In fact, Lakoff predicted a year ago that Trump would win with 47% of the vote. (The actual total was 46%.) Kathleen Parker: In his head, not ours.

In one of Walker Percy’s brilliant novels, “The Second Coming,” protagonist Will Barrett keeps falling down for no apparent reason. He also suffers trances during which he contemplates existential questions. Barrett comes to mind in the era of Donald Trump. I’m not falling down on the golf course yet, as Barrett did, but I confess to a feeling of lightheadedness coupled with slight nausea. It makes perfect sense that Barrett finds salvation in a young woman recently released from an insane asylum. When many of those around you seem to be suffering from some sort of group mania — believing what isn’t true and defending what isn’t defensible — then the officially “insane” offer some strange solace. Full text: James Comey testimony transcript on Trump and Russia.

A transcript of former FBI Director James Comey's testimony before the Senate Intelligence Committee on June 8. This transcript will be updated: SEN. RICHARD BURR: I call this hearing to order. Director Comey, I appreciate your willingness to appear before the committee today, and more importantly I thank you for your dedicated service and leadership to the Federal Bureau of Investigation. Your appearance today speaks to the trust we have built over the years and I'm looking forward to a very open and candid discussion today. How a ‘shadow’ universe of charities joined with political warriors to fuel Trump’s rise.

Ivanka and Jared’s Power Play. The modern Presidential campaign may be the world’s most sophisticated pop-up operation, a billion-dollar multilayered organization that, if it hopes to succeed, must be as technologically sophisticated and responsive as any Silicon Valley unicorn. A campaign includes armies of social-media worker bees, data crunchers, messaging experts, policy advisers, media surrogates, fund-raising chiefs, oppo-research teams, volunteers, and, above all, coolheaded managers, who can formulate a coherent position on Chinese trade policy and a plan for how to get out the vote in Hillsborough County in a lightning storm. Then, there is the Presidential campaign of Donald J. The Story Behind Jared Kushner’s Curious Acceptance into Harvard. Cookies are Not Accepted - New York Times. Cookies are Not Accepted - New York Times.

It is hard to imagine a more scathing indictment of our ability to read another’s thoughts and intentions than our inability to predict Donald Trump’s next move. From the gross pre-election misjudgments to postelection bafflement, the best pundits are at a loss to accurately anticipate his response to matters like North Korean military aggressiveness or his moment-by-moment political gyrations and opinion reversals. Let’s be clear about what the 25th Amendment does and doesn’t do. I wrote ‘The Art of the Deal’ with Trump. His self-sabotage is rooted in his past.

The Unauthorized White House visitor logs and records. Shoker! Rediculous chocker Trump attaks and dishoners English with ever-dummer spellings. The English language was unprepared for the attak. It was destined to loose. And, inevitably, it chocked. Possible source of Trump's mass voter fraud claim says proof is on the way. In 12-minute exchange with CNN's Chris Cuomo Friday, VoteStand founder Gregg Phillips alleged he has the names of three million individuals who voted illegally, but that he needs more time to prepare a public report to ensure accuracy and because the work is being completed by volunteers.

First Community Credit Union. Details Browser & Version: Browser and version needs to be on one of our most recommended browser and minimum supported browser version or above. More info Browser version needs to be or above More info Operating System: JavaScript Enabled: JavaScript must be enabled. More info Cookies Enabled: Cookies must be enabled. ICYMI. ‘He Has This Deep Fear That He Is Not a Legitimate President’ Trump Intelligence Allegations. Russian Intervention in American Election Was No One-Off. Watch FRONTLINE'S 10 Most-Streamed Documentaries of 2016. Log In. SNL makes fun of Trump’s tweets, and Trump immediately tweets his disapproval. Sad!