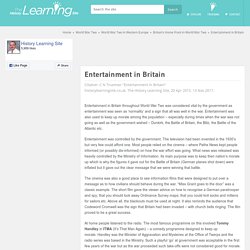 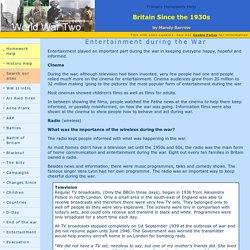 Cinema During the war, although television had been invented, very few people had one and people relied much more on the cinema for entertainment. Cinema audiences grew from 20 million to 32 million making 'going to the pictures' the most popular form of entertainment during the war Most cinemas showed children's films as well as films for adults. In between showing the films, people watched the Pathe news at the cinema to help them keep informed, or possibly misinformed, on how the war was going. 'तारक मेहता का उल्टा चश्मा' में यह अभिनेत्री हो सकती है नई दयाबेन! इस महिला क्रिकेटर की बायोपिक में लीड रोल में होंगी अभिनेत्री तापसी पन्नू! Deepika to replace Kangana in 'Imali'? Director reveals truth. Due to their packed schedules, Bollywood actors often have to walk out of projects, leaving the makers as well as the fans perplexed as to who will be the new replacement. 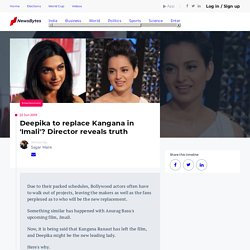 Something similar has happened with Anurag Basu's upcoming film, Imali. Now, it is being said that Kangana Ranaut has left the film, and Deepika might be the new leading lady. Here's why. My mental illness has taught me a lot, says Deepika. Newly-crowned the World's Most Gorgeous Woman, Padmaavat actress Deepika Padukone is admired by all in tinsel town. 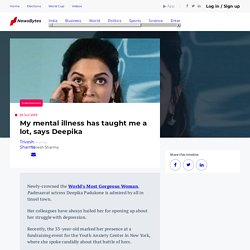 Her colleagues have always hailed her for opening up about her struggle with depression. Recently, the 33-year-old marked her presence at a fundraising event for the Youth Anxiety Center in New York, where she spoke candidly about that battle of hers. Here is what she said. Popular Pastimes And Entertainment In The Second World War. Entertainment during the Second World War provided civilians with a form of escape from the hardships of wartime life. 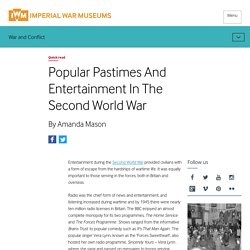 It was equally important to those serving in the forces, both in Britain and overseas. Radio was the chief form of news and entertainment, and listening increased during wartime and by 1945 there were nearly ten million radio licenses in Britain. The BBC enjoyed an almost complete monopoly for its two programmes, The Home Service and The Forces Programme. Anushka explains why it is easy to love Virat Kohli. It is hard to not love Indian skipper Virat Kohli. 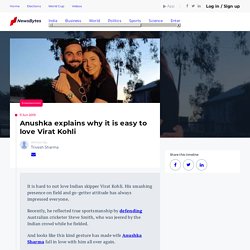 His smashing presence on field and go-getter attitude has always impressed everyone. Recently, he reflected true sportsmanship by defending Australian cricketer Steve Smith, who was jeered by the Indian crowd while he fielded. Is Varun Dhawan going to reveal his wedding date soon? Imran Khan spotted after long, fans worry about his health. Bollywood actor Imran Khan (Jaane Tu Ya... 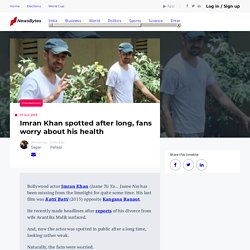 Jaane Na) has been missing from the limelight for quite some time. His last film was Katti Batti (2015) opposite Kangana Ranaut. He recently made headlines after reports of his divorce from wife Avantika Malik surfaced. And, now the actor was spotted in public after a long time, looking rather weak. Naturally, the fans were worried. #ComicBytes: Most heroic things which The Hulk has ever done. The strongest Avenger is often portrayed as someone with little to no control over his temper. 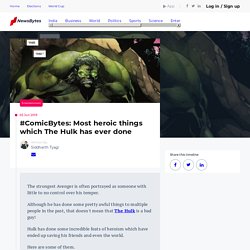 Although he has done some pretty awful things to multiple people in the past, that doesn't mean that The Hulk is a bad guy! Hulk has done some incredible feats of heroism which have ended up saving his friends and even the world. Here are some of them. Saved everyone by lifting up a mountain range The Beyonder is one of the most powerful beings in the Marvel Universe. 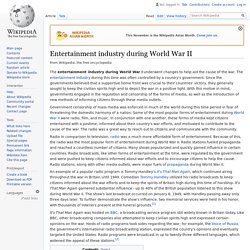 The entertainment industry during this time was often controlled by a country's government. Since the governments believed that a supportive home front was crucial to their countries' victory, they generally sought to keep the civilian spirits high and to depict the war in a positive light. With this motive in mind, governments engaged in the regulation and censorship of the forms of media, as well as the introduction of new methods of informing citizens through these media outlets. Government censorship of mass media was enforced in much of the world during this time period in fear of threatening the domestic harmony of a nation. Some of the most popular forms of entertainment during World War II were radio, film, and music. Reasons why you should watch 'Chernobyl', IMDb's best-rated show ever.

HBO president talks about the negative feedback 'GoT' finale received. The eighth season of Game of Thrones was universally panned by viewers and critics alike. 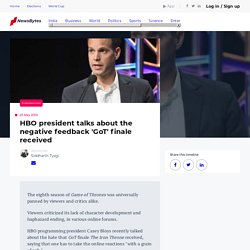 Viewers criticized its lack of character development and haphazard ending, in various online forums. HBO programming president Casey Bloys recently talked about the hate that GoT finale The Iron Throne received, saying that one has to take the online reactions "with a grain of salt. " Here's what he said. There's no "way that all fans would've been happy" Bloys was asked by Deadline about his reaction to the fan backlash. Kangana, Deepika, Priyanka set Cannes red carpet on fire. Actors Kangana Ranaut, Deepika Padukone and Priyanka Chopra set the red carpet of the 72nd Cannes Film Festival on fire with their appearances yesterday. While Kangana wore a Falguni Shane Peacock corset, and a Kanjeevaram sari by Madhurya Creations, Priyanka was seen wearing a thigh-high slit glittering strapless gown by Roberto Cavalli.

She gets her power from chaos magic. Apart from that, her reality-altering powers make her truly unstoppable in battles. GoT: Jon Snow is a fascinating character. Here's why. GoT special: Intriguing facts about the fiercest Stark daughter, Arya. Madhuri now turns to singing, recording for English pop album. Entertainment during the war. Is Anushka Sharma planning to quit acting? Here's the truth. Complaint filed against Sara for riding pillion without helmet. Complaint An anonymous complainant filed the complaint against Sara Reportedly, an anonymous complainant has filed the police complaint against Sara for violating the traffic rules. The reports also suggested that after the complaint was registered, the Delhi Traffic Police asked for details about the actress. Further, an official stated that necessary action would be taken against her under the Motor Vehicles Act after the required investigation is done in the case.

Shooting. Amy Jackson-George Panayiotou to exchange rings on May 5. Not Kangana, Vidya Balan was first choice for Jayalalithaa biopic. Reason: Vidya also doing web series on Indira Gandhi A source close to the Tumhari Sulu actress said, "Vidya did not take it up because she felt she would do injustice to it, as around the same time, she had planned to work on her ambitious Indira Gandhi web series. " Web series Indira's web series to be based on Sagarika Ghose's book.