Mac Buyer's Guide: Know When to Buy Your Mac, iPod or iPhone 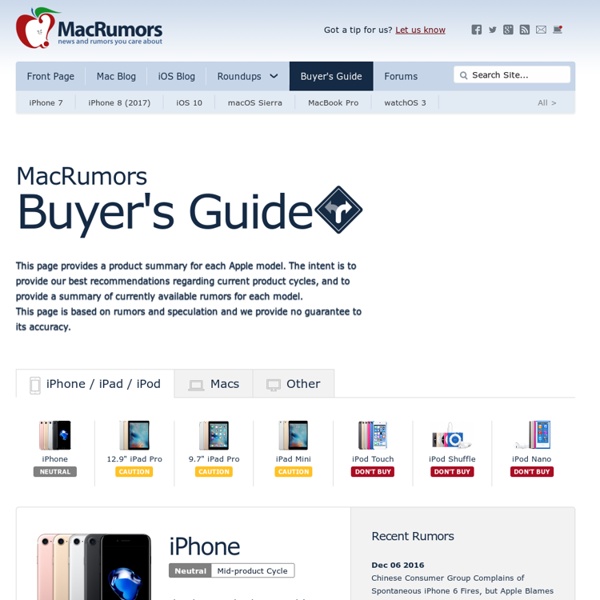 Why the iPhone 6—not the iWatch—is Apple’s biggest launch this year While new gadget categories—such as the supposedly forthcoming “iWatch”—could fetch Apple plenty of attention this year, and take some pressure off CEO Tim Cook, the bulk of its growth is more likely to come from a familiar source: The iPhone, which will be 7 years old this weekend. For some perspective on this, former Apple executive Jean-Louis Gassée wrote this week, “The most ambitious rumors project 50 million iWatches sold in the first 12 months. I think that’s an unrealistic estimate, but if a $300 iWatch can sell at these numbers, that’s $15B for the year. This seems like a huge number until you compare it to a conservative estimate for the iPhone: 50 million iPhones at $650 generates $32B per quarter.” Over the past several years, the iPhone has generated more than half of Apple’s revenue and likely more of its profits. The iPhone also drives a disproportionate amount of Apple’s growth.

AdWords: Keyword Tool With Keyword Planner, we've combined the functionality of Keyword Tool and Traffic Estimator to make it easier to plan search campaigns. That's why Keyword Tool is no longer available. You can use Keyword Planner to find new keyword and ad group ideas, get performance estimates for them to find the bid and budget that are right for you, and then add them to your campaigns. The Best Mac Apps of 2012 So Far As you some of you may have seen, we recently asked our Twitter and Facebook followers to name their favorite Mac desktop apps of the year so far – thanks again to everyone who sent us suggestions. After a little in-house brainstorming, we took the decision to add a few apps that were released earlier than 2012, but have become very important in our lives this year. Here’s the full selection we came up with, from blockbusters to hidden gems. 1. Angry Birds Space (Game) If we live in the same universe, chances are it doesn’t need an introduction, but just in case: Angry Birds Space is the latest installment in the Angry Birds franchise, and one of our personal favorites.

NeoLucida - A Portable Camera Lucida for the 21st Century by Pablo Garcia & Golan Levin Long before Google Glass ... there was the Camera Lucida. The what? The camera lucida. It’s a prism on a stick! Banksy’s latest sketch is a terrifying reminder of your iPhone addiction Banksy, the U.K. street artist who doesn’t shy from making commentary on social and technology issues with his graffiti street art, published a new sketch with a terrifying reminder that your iPhone has basically become a parasitic extension. In a separate piece of graffiti art posted on Twitter, Banksy had a subtle message against corporations like Apple, Nike, Coca-Cola, and others. Take a look: Source BanksyRelated

Cash in your electronics or recycle for free - eBay.com eBay Instant Sale is no longer available as a selling option for eBay customers. We apologize if this change has caused any inconvenience. eBay sellers can take advantage of other electronics selling options including our simplified selling process , or selling an item using your mobile device by downloading the eBay Mobile app to your smartphone or tablet. eBay is focused on delivering innovative experiences and working with our partners to provide our customers with options when it comes to selling your items on eBay. Selling your items also promotes sustainable commerce by keeping products in the market, out of landfills, and extending the product lifecycle.

- dougscripts.com June 9 2017 - 7:06 am Kirk and I go deep on playlists in iTunes in this week’s episode of The Next Track podcast. Real deep. This episode is sponsored by Audio Hijack from Rogue Amoeba. If you can hear it on your Mac, you can record it with Audio Hijack. Download a free trial of Audio Hijack and be sure to check out a special offer for The Next Track listeners in this week’s episode. New Kintsugi* *kintsugi is an old Japanese art of fixing broken pottery with gold New kintsugi is a new way of gluing porcelain based on the old kintsugi technique. The story goes that kintsugi may have originated when in the late 15th century the emperor sent his damaged pottery back to China for repairs.

FLIR One gives your iPhone infrared Predator vision Like most geeks in my generation, my first real glimpse of thermal imaging was provided by John McTiernan’s 1987 film Predator, where Arnold Schwarzenegger and his team of badasses are stalked and killed by an even badassier three-meter-tall alien out on safari. The eponymous "predator" perceives the world through machine-augmented infrared vision, and Ahnold’s body heat is brightly visible to the creature as he and his crew scurry around amidst the comparatively cool jungle foliage. It makes for a neat visual effect, and Ahnold must figure out how to evade the hunter’s thermal vision as the movie violently explodes toward the inevitable final showdown. But real-time infrared thermal imaging is expensive—McTiernan had a Hollywood budget and could afford to rent the bulky equipment required to capture the film’s iconic imagery. Thermal imaging is still most often seen as a tool of military and law enforcement, with even small hand-held thermal cameras costing thousands of dollars.