Looking for the worm in the Apple Watch? Apple watch has been officially presented. 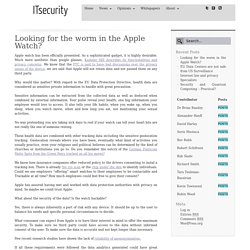 As a sophisticated gadget, it is highly desirable. Much more aesthetic than google glasses, Kashmir Hill describes its functionalities and privacy concerns. We know that the FTC is said to have had discussions over the privacy issues of the device. we are said that Apple will not retain data and not passed them on any third party. Why would this matter? With regard to the EU Data Protection Directive, health data are considered as sensitive private information to handle with great precaution. Sensitive information can be extracted from the collected data as well as deduced when combined by external information.

No way pretending you are taking sick days to rest if your watch can tell your heart bits are not really the one of someone resting. These health data are combined with other tracking data including the sensitive geolocation tracking. We know how insurance companies offer reduced policy to the drivers consenting to instal a tracking box. The inside story of how Apple's new medical research platform was born. On September 27, 2013, during a dimly-lit presentation at Stanford’s MedX conference, Dr. 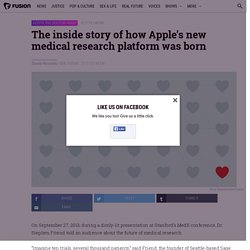 Stephen Friend told an audience about the future of medical research. “Imagine ten trials, several thousand patients,” said Friend, the founder of Seattle-based Sage Bionetworks, a nonprofit that champions open science and data sharing. “Here you have genetic information, and you have what drugs they took, how they did. Put that up in the cloud, and you have a place where people can go and query it, [where] they can make discoveries.” In this scenario, Friend said, patients would be able to control who could access their information, and for which purposes.

The crowd was receptive. He was closer than he thought. After Friend’s talk, O’Reilly approached the doctor, and, in typical tight-lipped Apple fashion, said: “I can’t tell you where I work, and I can’t tell you what I do, but I need to talk to you,” Friend recalls. Stephen Friend. _CAHIERS_IP2_WEB.pdf. Apple Watch's privacy details under scrutiny by Connecticut attorney general.

The attorney general of the U.S. state of Connecticut is concerned about the privacy implications of Apple Watch’s handling of consumers’ health information. 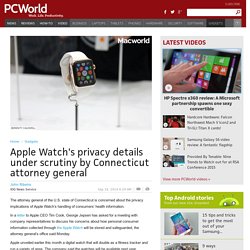 Privacy Challenges Lie Ahead of the Apple Watch  "Beam me up, Scottie" -- a phrase that was once a glamorous fantasy of sci-fi enthusiasts might now be becoming a reality. 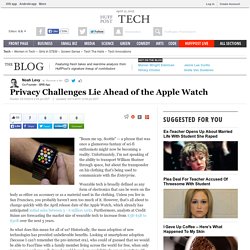 Unfortunately, I'm not speaking of the ability to transport William Shatner through space, but about the transponder on his clothing that's being used to communicate with the Enterprise. Wearable tech is broadly defined as any form of electronics that can be worn on the body as either an accessory or as a material used in the clothing. Unless you live in San Francisco, you probably haven't seen too much of it. However, that's all about to change quickly with the April release date of the Apple Watch, which already has anticipated initial sales between 5 - 6 million units. Furthermore, analysts at Credit Suisse are forecasting the market size of wearable tech to increase from $3B-$5B to $50B over the next 5 years. So what does this mean for all of us? These advancements are exciting but we should perhaps proceed cautiously. Therefore, the onus falls in two places.

What we know about security features on the Apple Watch. The Apple Watch can do a lot of things — monitor your heart rate, buy stuff with Apple Pay and even open your garage door. 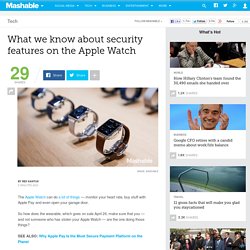 So how does the wearable, which goes on sale April 24, make sure that you — and not someone who has stolen your Apple Watch — are the one doing those things? While we don't know too much about how the Apple Watch will tackle privacy concerns, the company has a few elements in place to make sure the device is secure. To start, Apple Watch comes with an opt-in PIN number, just like iPhones do, for Apple Pay. If the PIN is activated, users have to enter it each time they put the Apple Watch back on.

Apple Watch Displays Your Digital World, at a Glance. Photo SAN FRANCISCO — When unveiled its watch last fall, the company showed only demo models of the new device — polished prototypes of the hardware running nonworking loops of the software. 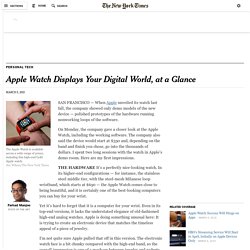 Xeni on Rachel Maddow Show on Apple Watch. ?tag=nl. Apple Watch has been billed as a fashion statement, the emergence of the smart watch as a real device and a way to generate iPhone sales. 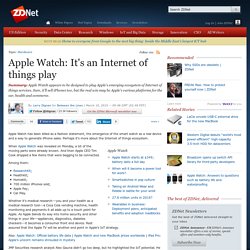 Perhaps it's more about the Internet of things ecosystem. When Apple Watch was revealed on Monday, a lot of the moving parts were already known. And then Apple CEO Tim Cook dropped a few items that were begging to be connected. Among them: ResearchKit;HealthKit;HomeKit;700 million iPhones sold;Apple Pay;Car Play. Apple aims to help medical studies with ResearchKit. Apple thinks its new software framework can solve some of the biggest challenges facing medical researchers, including recruiting people for studies and collecting health data more frequently. 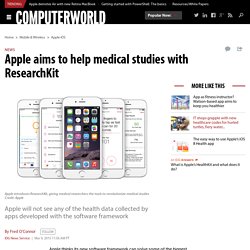 Called ResearchKit, the framework will allow developers to create apps for medical research studies and turn a smartphone into a diagnostic tool, Apple said Monday during an event in San Francisco. ResearchKit will be released as open source next month and the first five apps are available today, said Jeff Williams, Apple's senior vice president of operations. Because it's releasing ResearchKit as open source, apps can be developed for mobile platforms other than iOS, such as Android. Apple teamed up with several hospitals to develop the initial apps, said Williams. 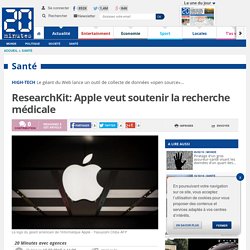 Exclusive: U.S. FTC asking Apple about health data protection. FTC reportedly interested in privacy of Apple Watch health data. The US Federal Trade Commission has been meeting with Apple as it looks to ensure that private health data collected by the company's phones, tablets, and upcoming smartwatch aren't used without their owners' consent, Reuters reports, citing a pair of anonymous sources. 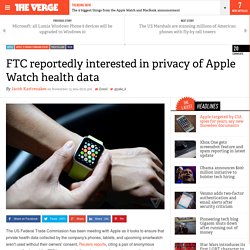 Apple and the FTC have reportedly met on several occasions over the past months, with the commission showing a particular interest in Apple Watch and its ability to track a wearer's pulse. Apple has reportedly continued to stress to the commission that it will not sell health data or allow third parties to do so. The FTC declined to comment. The privacy and security questions we must ask about the Apple Watch. Next month, the Apple Watch will become the must-have gadget for early adopters. Like Google Glass, the Watch needs to pair with a heavier-duty operating system provided by a smartphone. But instead of putting something ugly on your face, Apple is putting an elegant device on your wrist so you can read texts and emails discreetly, and take phone calls Dick Tracy-style.

Where Glass had a camera to record the world around you as you saw it, the Apple Watch has a sensor to see what’s going on inside you. Its pulse oximeter will keep track of your heart rate. Apple is signaling with this that it wants to move seriously into the health-tracking space. Now that our iDevices are going to be collecting even more information from us, what privacy and security concerns do we need to be freaking out about? 1. 5 Reasons NOT To Buy An Apple Watch!