Who Exactly is the iPad's Target Market? I was debating with my friend David A. 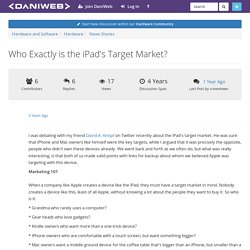 Knopf on Twitter recently about the iPad's target market. He was sure that iPhone and Mac owners like himself were the key targets, while I argued that it was precisely the opposite, people who didn't own these devices already. We went back and forth as we often do, but what was really interesting, is that both of us made valid points with links for backup about whom we believed Apple was targeting with this device. Marketing 101 When a company like Apple creates a device like the iPad, they must have a target market in mind. Nobody creates a device like this, least of all Apple, without knowing a lot about the people they want to buy it. . * Grandma who rarely uses a computer?

* Gear heads who love gadgets? * Kindle owners who want more than a one-trick device? * iPhone owners who are comfortable with a touch screen, but want something bigger? A Look at the Literature Daniel Tenner wrote on TechCrunch: Nick Marshall Wrote on CellFanatic: APPLES TARGET MARKET - APPLE INC.   CASE STUDY. Apple Doesn't Target Markets. It Targets People. It’s fascinating to watch enterprise adoption of Apple technology given its apparent disdain for this market. 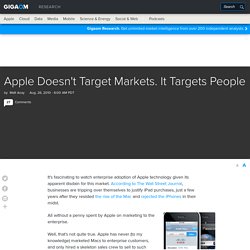 According to The Wall Street Journal, businesses are tripping over themselves to justify iPad purchases, just a few years after they resisted the rise of the Mac and rejected the iPhones in their midst. All without a penny spent by Apple on marketing to the enterprise. Well, that’s not quite true. Apple has never (to my knowledge) marketed Macs to enterprise customers, and only hired a skeleton sales crew to sell to such customers, but it has been advertising the iPhone and its business-related applications in The Wall Street Journal, Bloomberg BusinessWeek, and other business-friendly publications. It’s also added Microsoft Exchange compatibility to the iPhone, as well as advanced, CIO-pleasing security. However, these actions came well after the initial launch of the iPhone, and serve to fuel existing adoption rather than to kickstart new adoption. It targets people. Some thoughts on the target market for the Apple Watch Edition - UNDERDOG of PERFECTION.

Thoughts on the Apple Watch have been simmering on my mental back burner since it was announced in September, and I followed along with the announcement yesterday to see what new things we might learn about the product — most significantly, the prices for the higher-end models. 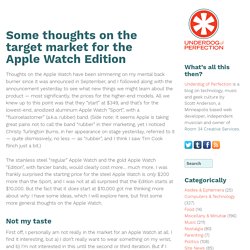 All we knew up to this point was that they “start” at $349, and that’s for the lowest-end, anodized aluminum Apple Watch “Sport”, with a “fluoroelastomer” (a.k.a. rubber) band. (Side note: It seems Apple is taking great pains not to call the band “rubber” in their marketing, yet I noticed Christy Turlington Burns, in her appearance on stage yesterday, referred to it — quite dismissively, no less — as “rubber”, and I think I saw Tim Cook flinch just a bit.) The stainless steel “regular” Apple Watch and the gold Apple Watch “Edition”, with fancier bands, would clearly cost more… much more.

Not my taste First off, I personally am not really in the market for an Apple Watch at all. I especially dislike gold. Who are Apple's target market. Apple is marketing to people who have a few characteristics. 1) Middle/Upper income folks who are willing to pay a bit more for a better user experience. paying 500 more for a computer is not a huge deal if you have a decent income. 2) People who like to have fun with technology. 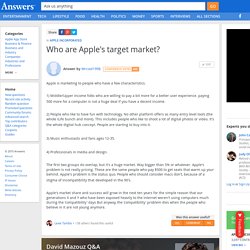 No other platform offers as many entry level tools (the whole iLife bunch and more). This includes people who like to shoot a lot of digital photos or video. It's the whole digital hub concept. 3) Music enthusiasts and fans ages 12-35. 4) Professionals in media and design. The first two groups do overlap, but it's a huge market.

Apple's market share and success will grow in the next ten years for the simple reason that our generations X and Y who have been exposed heavily to the internet weren't using computers much during the 'compatibility' days But anyway, the 'compatibility' problem dies when the people who believe in it are not young anymore.