Tim Brown sur Twitter : "Designing for Large Screen Smartphones. Standpoint's Moas: Why Apple's blacklisted. The App is Here! The wait is over!!! 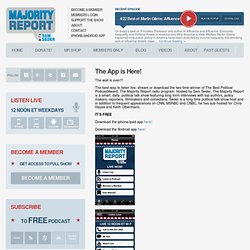 The best way to listen live, stream or download the two-time winner of The Best Political PodcastAward, The Majority Report radio program. Hosted by Sam Seder, The Majority Report is a smart, daily, political talk show featuring long form interviews with top authors, policy makers, reporters, filmmakers and comedians. Seder is a long time political talk show host and in addition to frequent appearances on CNN, MSNBC and CNBC, he has sub hosted for Chris Hayes and Keith Olbermann. Download the iphone/ipad app here! Download the Android app here This App features: + Easy live audio and video streaming of the Monday through Friday live show at 12PM ET to listen or watch anywhere. Apple Rumored to Go Black, White and Flat for iOS 7. Rumors that Apple is preparing major design changes with iOS 7 continue to heat up, with new reports suggesting a more muted and flat design aesthetic.

Last October, Jonathan Ive became responsible not only for the look and feel of Apple hardware, but also its software . By most accounts, Ive is not a fan of the skeuomorphic heavy design cues that currently dominate iOS. While we previously heard rumors that Ive was planning a broad UI overhaul with iOS 7, we didn't have many specific details. Now, 9to5 Mac is reporting that Ive's look for iOS 7 will be "black, white and flat all over. " According to 9to5 Mac's sources, many of the textures currently present in iOS — linen on the notifications panel and leather in the calendar app — will be replaced with flat black and white colors. 9to5 Mac also suggests that apps such as Mail, Calendar and Maps will gain a more unified look. The green felt from Game Center and the wooden shelves from Newsstand have also reportedly been removed.

Apple Confirms: It's the iPhone 5. Never before in the recent history of Apple product announcements has the famously tight-lipped company confirmed the name of a gadget in advance. 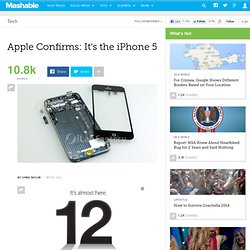 But that's what happened Tuesday when the invites arrived for a special event on September 12 — featuring a giant 5 in the shadow of the date. Apple famously wrong-footed the media around this time last year, announcing the iPhone 4S after every outlet on the planet had predicted the device would be called the iPhone 5. No clues as blatant as this one had been offered beforehand, and as a result, many attendees at the product launch felt underwhelmed. SEE ALSO: New iPhone Blues: Why Apple's CEO Doesn't Care What You Hoped to See. This Is The Facebook Messenger App You Can’t Get Yet. As you may have heard, Facebook just released a standalone Messenger app in the US (not yet released in Australia). 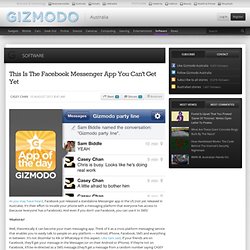 It’s their effort to invade your phone with a messaging platform that everyone has access to (because ‘everyone’ has a Facebook). And even if you don’t use Facebook, you can use it to SMS! What’s it do? Well, theoretically it can become your main messaging app. Think of it as a cross platform messaging service that enables you to easily talk to people on any platform — Android, iPhone, Facebook, SMS and everything in between. Why do we like it? It’s weird to think that this can be a standalone app apart from the clusterzuck that Facebook can be but, well, it really can. Even if you hate Facebook, you don’t hate your friends right?

Apple investigating inductive iPhone charging through headphones. By Neil Hughes Apple has shown interest in creating an inductive charging system, for portable devices like iPhones and iPods, that would involve using headphones to provide power to the device. 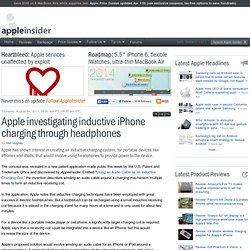 The concept was revealed in a new patent application made public this week by the U.S. Patent and Trademark Office and discovered by AppleInsider. Entitled "Using an Audio Cable as an Inductive Charging Coil," the invention describes winding an audio cable around a charging mechanism multiple times to form an inductive receiving coil. In the application, Apple notes that inductive charging techniques have been employed with great success in electric toothbrushes.

For a device like a portable media player or cell phone, a significantly larger charging coil is required. Apple's proposed solution would involve winding an audio cable for an iPhone or iPod around a charging station. China Jails Three Over iPad 2 Foxconn Leak. Three people in China have been sentenced to jail in connection with a plot to leak information about the iPad 2 months before its official release. 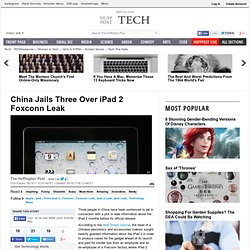 According to the Wall Street Journal, the head of a Chinese electronics and accessories makers sought heavily guarded information about the iPad 2 in order to produce cases for the gadget ahead of its launch and paid for insider tips from an employee and an ex-employee of a Foxconn factory where iPad 2 devices were assembled. Xiao Chengsong, the manager of Shenzhen MacTop Electronics Co. reportedly offered 20,000 yuan to former Foxconn worker Hou Pengna for this information. Then, Hou apparently paid active employee Lin Kecheng to retrieve images of the iPad 2. Apple. The Unofficial Apple Weblog.