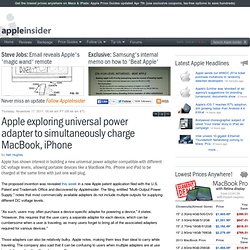 The proposed invention was revealed this week in a new Apple patent application filed with the U.S. Patent and Trademark Office and discovered by AppleInsider. The filing, entitled "Multi-Output Power Supply," notes that most commercially available adapters do not include multiple outputs for supplying different DC voltage levels. "As such, users may often purchase a device-specific adapter for powering a device," it states. Those adapters can also be relatively bulky, Apple notes, making them less than ideal to carry while traveling. Back to my #Apple Airport broken by iCloud update on Apple Routers. #Apple Airport Extreme due for firmware update? iCloud causing mobile me error to flash on base station?

Photos du mur. #Apple #iPhone 4 or 4S Can you Spot the difference? It's all under the skin. #epatcon if the vGo was in the #apple store it would sell like hotcakes. Apple Working on Allowing the Merging of Multiple Apple IDs. Apple is Building iMessage into OS X Lion's iChat. Back in June, Apple unveiled iMessage, one of the major new features of the upcoming iOS 5 update. iMessage is a unified messaging service for iPhone, iPad, and iPod Touch that allows users to send text and multimedia messages over Wi-Fi and 3G with read and delivery receipts and real-time typing indication. 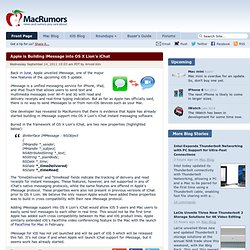 But as far as Apple has officially said, there is no way to send iMessages to or from non-iOS devices such as your Mac. One developer has revealed to MacRumors that there is evidence that Apple has already started building in iMessage support into OS X Lion's iChat instant messaging software. Buried in the framework of OS X Lion's iChat, are two new properties (highlighted below): @interface IMMessage : NSObject { IMHandle *_sender; IMHandle *_subject; NSAttributedString *_text; NSString *_plainBody; NSDate *_time; NSDate *_timeDelivered; NSDate *_timeRead; The "timeDelivered" and "timeRead' fields indicate the tracking of delivery and read receipts for instant messages.

iPhone 5 launch could be signaled by ‘Apple fixture installation’ at Best Buy on October 21st. We've just been tipped off this evening to a Best Buy location that's been scheduled to have a mysterious "Apple fixture" installed on Friday, October 21st. 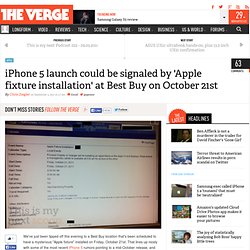 That lines up nicely with some of the most recent iPhone 5 rumors pointing to a mid-October release, and considering that we're already in September and we don't have a press event on the books yet, October availability is looking more likely by the day. To be clear, this isn't a run-of-the-mill installation for the big box -- our tipster tells us that the request that a manager be on-hand at 6AM is out of the ordinary (they usually show up at 7AM for inventory), and that a similar arrangement was scheduled for the iPhone 4 launch. While it seems strange that thousands of retail employees could potentially be clued into iPhone availability over six weeks in advance, the language in Best Buy's system is sufficiently vague so that it could technically be anything.

BREAKING: Steve Jobs Resigns as CEO of Apple. Steve Jobs, co-founder and two-time CEO of Apple, offered his resignation to the company's board Wednesday. 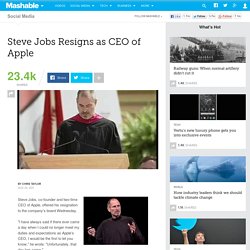 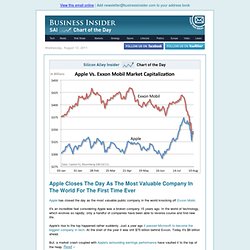 It's an incredible feat considering Apple was a broken company 15 years ago. In the world of technology, which evolves so rapidly, only a handful of companies have been able to reverse course and find new life. Apple Rumor Roundup: New MacBook Airs, The Perilous Future Of MobileMe, And More. Attn Steve Jobs: Red Swoosh P2P Service Wants To Save You $15 Million. Red Swoosh is a P2P desktop client which appears to compete against the BitTorrent client. 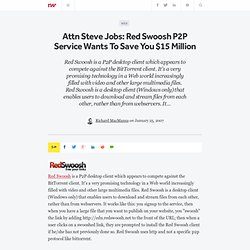 It's a very promising technology in a Web world increasingly filled with video and other large multimedia files. Red Swoosh is a desktop client (Windows only) that enables users to download and stream files from each other, rather than from webservers. It works like this: you signup to the service, then when you have a large file that you want to publish on your website, you "swoosh" the link by adding to the front of the URL; then when a user clicks on a swooshed link, they are prompted to install the Red Swoosh client if he/she has not previously done so. Red Swoosh uses http and not a specific p2p protocol like bittorrent. Red Swoosh claims to offer the most efficient P2P file-sharing system on the internet.