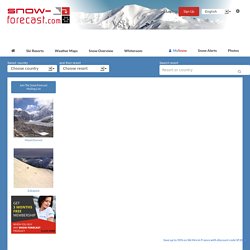 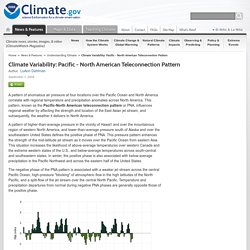 This pattern, known as the Pacific-North American teleconnection pattern or PNA, influences regional weather by affecting the strength and location of the East Asian jet stream, and subsequently, the weather it delivers to North America. A pattern of higher-than-average pressure in the vicinity of Hawai'i and over the mountainous region of western North America, and lower-than-average pressure south of Alaska and over the southeastern United States defines the positive phase of PNA. This pressure pattern enhances the strength of the mid-latitude jet stream as it moves over the Pacific Ocean from eastern Asia. 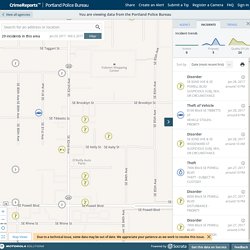 Arson Any willful or malicious burning or attempt to burn, with or without intent to defraud, a dwelling, house, public building, motor vehicle or aircraft, personal property of another. Death Loss of life caused by negligence, suicide, and accidental death. Family Offense Unlawful nonviolent acts by a family member (or legal guardian) that threaten the physical, mental, or economic well-being or morals of another family member and that are not classifiable as other offenses, such as Assault or Sex Offenses. Missing Person A missing person is a person 18 years old or older whose disappearance is possibly not voluntary, or a child whose whereabouts are unknown to the child's legal custodian. Portland-Vancouver Metro Area Live Audio Feeds. Portland Fire Bureau: Incidents. This map contains up to 100 of the most recent, closed, non-confidential, 911 calls for service received by Portland Oregon's 911 system in the past 24 hours. 100 incidents on this map. 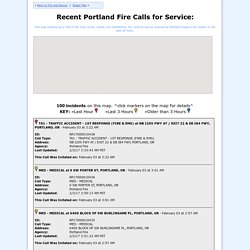 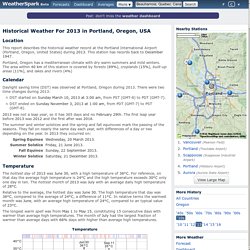 This station has records back to December 1947. Portland, Oregon has a mediterranean climate with dry warm summers and mild winters. The area within 40 km of this station is covered by forests (69%), croplands (15%), built-up areas (11%), and lakes and rivers (4%) Intellicast. Forcastweathergov. Accuweather. Google Earth Resources for Physical Geography. THE WESTERNER. The Aurora Borealis (The Northern Lights) – Everything you need to know. Hey fellow Aurora fans! 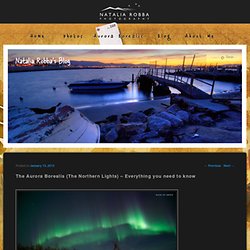 After several years of research, kilometers travelled, multiple destinations visited, dark drives down foreign icy roads, snow storms, disappointment, exhilaration, several failures but more successes, here is my two cents on everything Aurora Borealis First off, before I start I wanted to elaborate a little on the above. I’ve always held a certain fascination for the Northern Lights. My earliest memory was a documentary on the Discovery channel on Antartica when I was around 12 years old.

I found them ethereal and magical and straight away wanted to know more about them and see them. Being a 12 year old though has it’s drawbacks =) Being completely at the mercy of my parents destination wishlist meant that I wouldn’t really get to chase this dream until a little later on. SWPC Tips on Viewing the Aurora. NOAA / Space Weather Prediction Center. 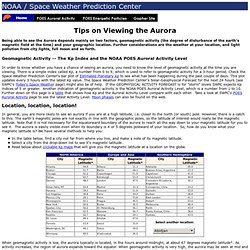 Spectacular Auroras Could Be Visible In Parts Of The US This Weekend. NASA Solar Dynamics Observatory Three-wavelength composite image depicting the eruption of the X1.6 class solar flare at 1:46 EDT, September 10. 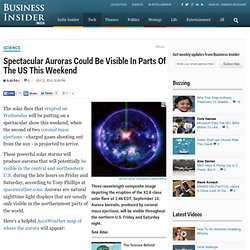 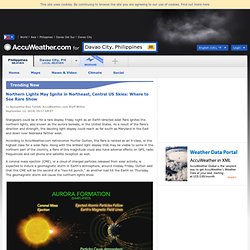 As a result of the flare's direction and strength, the dazzling light display could reach as far south as Maryland in the East and down over Nebraska farther west. Back-to-Back Sun Storms May Supercharge Earth's Northern Lights. Powerful solar flares from the sun this week may amplify the northern lights displays over parts of the northern United States through the weekend, space weather scientists say. 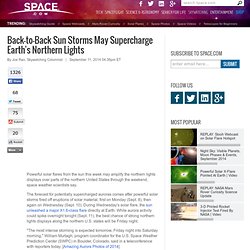 The forecast for potentially supercharged auroras comes after powerful solar storms fired off eruptions of solar material, first on Monday (Sept. 8), then again on Wednesday (Sept. 10). During Wednesday's solar flare, the sun unleashed a major X1.6-class flare directly at Earth. While aurora activity could spike overnight tonight (Sept. 11), the best chance of strong northern lights displays along the northern U.S. states will be Friday night. "The most intense storming is expected tomorrow, Friday night into Saturday morning," William Murtagh, program coordinator for the U.S.

You can select stations by first selecting a network in the "Select network" pull-down and then typing some or all of a station id or station name in the "Enter station(s)" box. Once a search string is entered, a list of the first 10 matches will be provided. If the first character entered is a digit, it will look for station ids that match, otherwise it will look for station names that match. Click on a station to add it to the list of selected stations. The wildcard characters '*' (match any zero or more characters) and '? ' As you type more characters, the list of suggestions will change to match the current search pattern.

You can limit the stations suggested to a particular state by adding ":" followed by the 2-character state code of the state to the end of the search string.