A Plan for the next phase in Weather Modification Science and Technology Developement - Raytheon, Weather Modification Assoc. 6506148. Nervous system manipulation by electromagnetic fields from monitors Abstract Physiological effects have been observed in a human subject in response to stimulation of the skin with weak electromagnetic fields that are pulsed with certain frequencies near 1/2 Hz or 2.4 Hz, such as to excite a sensory resonance. 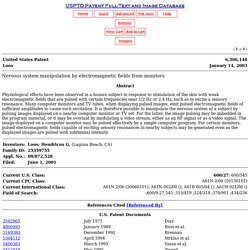 Many computer monitors and TV tubes, when displaying pulsed images, emit pulsed electromagnetic fields of sufficient amplitudes to cause such excitation. It is therefore possible to manipulate the nervous system of a subject by pulsing images displayed on a nearby computer monitor or TV set. For the latter, the image pulsing may be imbedded in the program material, or it may be overlaid by modulating a video stream, either as an RF signal or as a video signal. References Cited [Referenced By] U.S. Other References Primary Examiner: Winakur; Eric F. Claims I claim: 1. 2. 3. 4. 5. 6. 7. 8. 9. 10. 11. 12. 13. 14. Description FIG. 3 shows the circuit for a simple pulse generator. Weatherman Scott Stevens Oklahoma Tornado Weather Warfare. 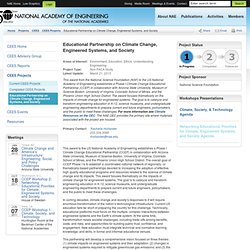 The overall goal of CCEP Phase I is to establish a coordinated national network of regionally- or thematically-based partnerships devoted to increasing the adoption of effective, high quality educational programs and resources related to the science of climate change and its impacts. This award focuses thematically on the impacts of climate change for engineered systems. The goal is to catalyze and transform engineering education in K-12, science museums, and undergraduate engineering departments to prepare current and future engineers, policymakers, and the public to meet these challenges. 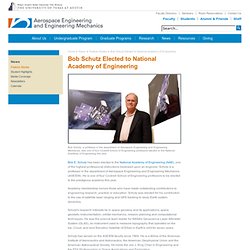 Bob E. Research. Mulva Family Donates $60 Million to Business and Engineering Schools. Jan. 24, 2014 AUSTIN, Texas — The Mulva Family Foundation has made a $60 million multiyear pledge to The University of Texas at Austin to support the McCombs School of Business and the Cockrell School of Engineering, once again demonstrating a deep commitment to the university’s future and to a continued vision of excellence in teaching and research. 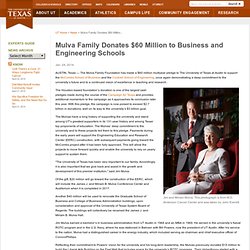 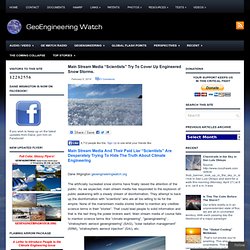 “we are reposting “The Snowmen, Turning Warmth to Winter” because it is imperative that people understand the completely engineered nature of the weather events occurring now across the country and around the globe. 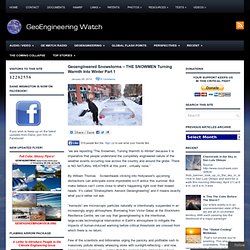 There is NO NATURAL WEATHER at this point , virtually none.” By William Thomas Screenheads clicking into Hollywood’s upcoming distractions can anticipate some improbable sci-fi antics this summer. But make believe can’t come close to what’s happening right over their bowed heads. GeoEngineering, SRM (aka Chemtrails) - Look UP, Get the APP, Save the WORLD. SkyderALERT, became an iTunes Top 5 and Twitter Top10 Paid Social Networking Mobile App within a month of its release, and now v3.0 is even better with it's new Twitter petition and Facebook integration. 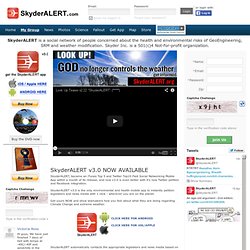 SkyderALERT v3.0 is the only environmental and health mobile app to instantly petition legislators and news media with 1 click - wherever you are on the planet. Get yours NOW and show lawmakers how you feel about what they are doing regarding Climate Change and extreme weather. SkyderALERT automatically contacts the appropriate legislators and news media based on your geo-location so you don't even need to know who they are. SkyderALERT provides that contact information. This breakthrough App also automatically lists politician's contact phone numbers so that you can call them up directly to voice your concerns on this environmental issue (or any other for that matter). Brianna Wellbrock. The Age of Transitions (full length documentary) Catastrophic Ecosystem Manipulation – Where Are We? » Catastrophic Ecosystem Manipulation – Where Are We? Where are we? 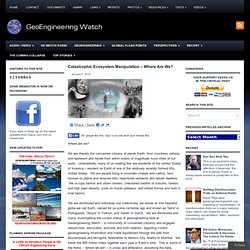 We are literally the concerned citizens of planet Earth, from countless nations, and represent and reside from within orders of magnitude more cities of our world. Undoubtedly, many of us reading this are residents of the United States of America – resident on Earth of one of the relatively recently formed fifty, United States. We are people living in mountain chalets and cabins, farm houses on plains and terraced hills, beachside residents and desert dwellers. We occupy barrios and urban centers, checkered swaths of suburbs, forests and high plain deserts, yurts on frozen plateaus, and stilted homes and huts in river basins. We are distributed and individual, but collectively, we reside on this beautiful globe we call Earth, named for us some centuries ago and known as “terra” in Portuguese, “dünya” in Turkish, and “barde” in Dutch. 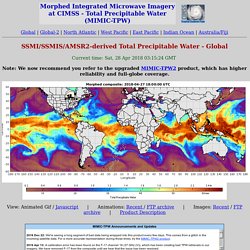 Rothschilds And The Geoengineering Empire. Why would the Rothschild’s be so interested in owning the largest and most recognized weather modeling organization out there? 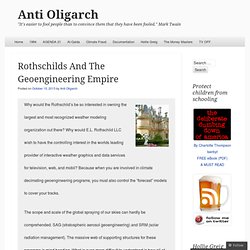 Why would E.L. Rothschild LLC wish to have the controlling interest in the worlds leading provider of interactive weather graphics and data services for television, web, and mobil? Because when you are involved in climate decimating geoengineering programs, you must also control the “forecast” models to cover your tracks.

4686605. The Billy Meier UFO Contacts - The Unknown Dangers of HAARP. The Unknown Dangers of HAARP Excerpt from the FIGU Bulletin No. 13 (Vol. 4), January 1998 (English translation: February 1998) "HAARP" is the abbreviation for "High-frequency Active Auroral Research Project". A New Microwave Backhaul Network Philosophy– as Reported by AGL Magazine. Don’t miss this December’s issue of AGL Magazine. Richard Biby, Editor of the mag, wrote the following: “Another company I’ve had the pleasure of being introduced to is Allied Fiber.

Hunter Newby is its chief executive officer. I first heard about the genius of Hunter from some folks in the fiber space who were trying to find a way into the wireless arena. Backhaul. Update: I have a much better picture of the backhaul system integrated with BATS and have updated below. I also added a little more thought about redundancy. I noticed a few PRs and an article in Daily Tech that the U.S. Navy is deploying 4G LTE on the U.S.S. Kearsarge,U.S.S. San Antonio and U.S.S. I’m guessing here, but it make sense to me if each ship has a full MME, PGW/SGW to improve redundancy so somewhere there is a rack of hardened LTE SAE (RAN Core) on board. SCHAUMBURG, ILL. & INDIANAPOLIS, May 17, 2012 – Cambium Networks™, a leading provider of wireless broadband solutions for reliable connectivity in any environment, and BATS Wireless, one of the world’s leading innovators of advanced wireless wide area network (WWAN) provisioning systems, today announced their enhanced wireless point-to-point (PTP) radio and antenna tracking solution is being incorporated as part of a mobile communications networking project being led by Oceus Networks.

Highly Integrated 60 GHz Radio Transceiver Chipset. The demand for high capacity data continues to increase year over year at significant rates. In an ongoing race, technology and application developers have pushed into higher and higher bandwidths, first with voice, then data and now video is driving the demand. This demand is evident in cellular technology with the migration from AMPS to 3G, and now the rollout of 4G capabilities aimed at the millions of application-rich smartphone and tablet devices. It is also evident in the home, where WiFi has moved from 1 to 54 Mbps and now is pushing into hundreds of Mbps with IEEE 802.11n and 802.11ac. Spectrum availability has been a prime consideration in the development of technologies to meet the data capacity demand.

Stating the obvious, networks are evolving rapidly and so too, are the configurations of microwave backhaul systems. Mobile Backhaul Solutions by ADTRAN. WISP. Wireless Internet Service Providers (WISPs) face increasing competition from incumbent Telco and cable providers and, consequently, need to do even more to differentiate their services. Residential and corporate Internet access customers continue to demand lower access costs, greater speeds, and more features. In that tough environment, the ability to own and control the network is crucial to the success of any WISP or ISP looking to successfully and profitably offer differentiated services and manage network costs. Conterra Broadband Services. Conterra is one of the largest and most experienced Ethernet and TDM transport carriers in the United States, specializing in the design, deployment and operation of customized backhaul networks in rural areas. Microwave backhaul: design to deployment.

SOSUS The "Secret Weapon" of Undersea Surveillance. Brianna Wellbrock. WARNED AGAINST SHARING THIS MICROSCOPIC ANALYSIS of US ARTIFICIAL SNOW - SEE WHAT the DOD is HIDING! What is With The Snow From the Recent Storm - Solar Vortex? Wireless, Chemtrails, and You. Rogue State: A Guide to the World's Only Superpower - William Blum. Facebook User Account Frozen After Posting Photo » Facebook User Account Frozen After Posting Photo.

Http___www_bibliotecapleyades_net_scalar_tech_esp_scalartech04_htm. The Billy Meier UFO Contacts - The Unknown Dangers of HAARP. "Owning the Weather" for Military Use by Michel Chossudovsky.